St. Thomas More graduate Mackenzie Bourg was chosen by Ceelo Greene after performing on the season premire of NBC's The Voice last night.

The Voice held the second part of its three-night Season 3 premiere and among its blind auditions was 19-year-old St. Thomas More graduate MacKenzie Bourg performing his own version of Foster the People's "Pumped Up Kicks."

"It is the most unbelievable thing for a parent to see," says Mackenzie's father Rudy Bourg of seeing his son onstage performing in front of millions of people. "I've always said to him that it's not going to be sports because he's five foot nothing and one of the things he's really been able to do is touch people spiritually with his smile and with his songs."

Bourg has come a long way from a near fatal bout with viral myocarditis to fulfilling his promise to awaken from his coma before the Super Bowl to taking his father's advice and successfully auditioning for the Voice.

"To see him laying in a bed when his doctors saying he was probably going to be in the hospital for six more months to learn how to walk and learn how to do normal functions to seeing him on stage singing in front of people. It's unbelievable!" says Bourg.

While Ceelo Greene was the only coach to make his push for Mackenzie, Bourg says he is grateful that Mackenzie will be on his team.

"As a father you want your son to be with someone that not only can mold them and help them to grow," he says of being on Team Ceelo, "but also you want someone who will respect them and at the end of the day be their friend." 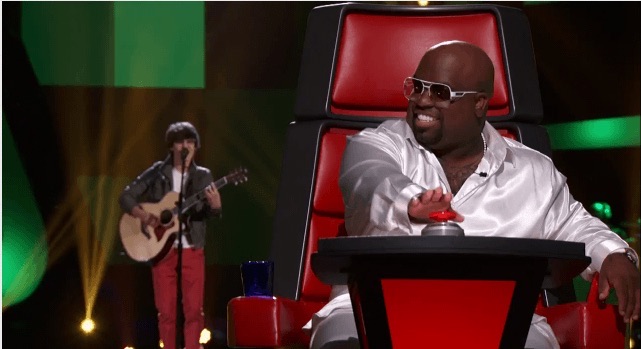 Bourg says that despite his son's performance in the coming rounds this season his job remains the same.

"My role now is to be his biggest cheerleader," says Bourg proudly, "and if anything happens where the next round comes and he doesn't succeed well then my role is to be his father and keep him positive and help him move forward."

To see Mackenzie's performance of "Pumped Up Kicks" click here. The single is also available on iTunes, where it came in at #36 on the iTunes pop chart. Be sure to track Mackenzie's progress by watching The Voice airing on NBC Mondays and Tuesdays at 7 p.m.