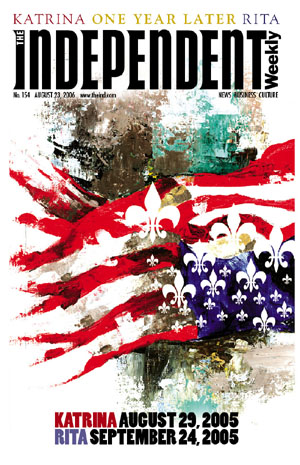 The Power Shuffle
The diaspora provoked by Katrina and Rita is still under way, moving around people, political influence and regional culture.
By Jeremy Alford

Do You Know What It Means to Myth New Orleans?
One of the Crescent City's biggest challenges is overcoming inaccurate reports and stereotypes that formed in the immediate wake of Katrina.
By Katy Reckdahl

Rough Road Home
Vermilion and Iberia Parish residents have finally secured funding from the Louisiana Recovery Authority, but lack of a master rebuilding plan leaves their small towns at risk.
By Mary Tutwiler

Tough Love
Tracking the continuing odyssey of a resourceful 6-year-old who was separated from his family for days after Hurricane Katrina.
By Leslie Turk

Like It Was Yesterday
Emotions are still raw and strained in the tight-knit community of Mouton Cove, where residents seek comfort in each other.
By Jeremy Alford

The Forgotten
Hurricane Rita decimated Cameron Parish, but residents say they're still living in the shadow of Hurricane Katrina.
By R. Reese Fuller

A Fistful of Hope
New Orleans residents navigate the peaks and valleys of their post-Katrina world.
By R. Reese Fuller

News Briefs
Media back in NOLA, Blanco wants to maintain Guard control and more
By The Independent Staff

Posters with a Purpose
The Hurricane Poster Project opens a special exhibition at the Old State Capitol on Aug. 29.
By Scott Jordan