After surveying sugar cane fields in south Louisiana that suffered the wind and rain of Hurricane Isaac, state Agriculture Commissioner Mike Strain said in mid-September that he perceived the damage as "extensive in localized areas."

After surveying sugar cane fields in south Louisiana that suffered the wind and rain of Hurricane Isaac, state Agriculture Commissioner Mike Strain said in mid-September that he perceived the damage as "extensive in localized areas." Not long after Strain announced his findings, officials with the LSU AgCenter said they expect the cash crop to take a $60 million hit due to the storm, or what amounts to a 7 percent loss of its pre-storm value.

Hurricane Isaac pushed ashore in the waning days of August, piling 11 feet of surge atop Shell Beach and initially fueling 85-mph gusts in Grand Isle. A mixed bag of signs for area farmers was left in Isaac's wake, Strain says, and the end results are still playing out for Louisiana's $1.1 billion sugar cane industry. "While there is sugar cane that will bounce back and thrive, some of the cane planted prior to Isaac's landfall [that I surveyed] was significantly damaged."

Sugar cane can be blown flat by a storm, and, if the sun can do its job, the crop will right itself. However, if the cane loses its top or becomes severely twisted, chances of rejuvenation are slim. For many south Louisiana farmers, especially those closer to the coast, too much of their crops seem to be falling into the latter category. 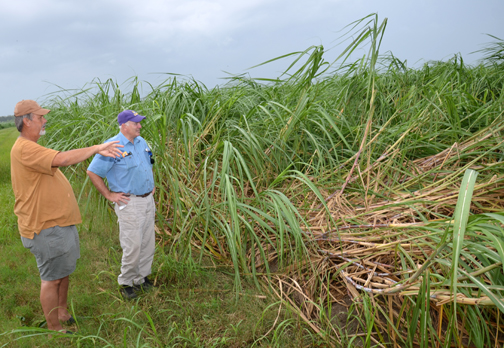 LSU AgCenter economist Kurt Guidry says sugar cane, above all other Louisiana crops, suffered the greatest economic loss from the storm - about $60 million, which equates to an 8 percent loss in yield. To put that into perspective, the hurricane's toll on all of the state crops combined, including sugar cane, was $100 million, which is less severe than agriculture officials initially feared and certainly less than other recent storms.

Jim Simon, general manager of the Thibodaux-based American Sugar Cane League, says many farmers are primarily worried about finishing planting, which had just gotten under way when the storm hit. "It's really going to make it difficult to finish planting, the way the fields are so wet," Simon says. "I think a lot of farmers are more worried about that than their current crops."

And if fields remain wet into early October, it could make the task more difficult. Guidry says the planting challenges have come up in his research as well, as farmers were in the process of planting next year's crop when Isaac blew through south Louisiana.

According to the LSU AgCenter, it is generally accepted that the sugar cane industry goes through three stages prior to producing harvestable cane:

The problem is that this three-tier process was interrupted, Guidry says. As such, the unfinished job will result in "either a change in planting methods," he adds, "or a change in the planting ratio." A planting ratio refers to the number of acres of sugar cane that can be planted from one harvested acre of seed cane.

If farmers have to change their planting methods, Guidry says the decision would mean harvesting additional acres for planting "and, therefore, [reducing] the number of acres a producer would normally have to harvest for sugar." In the end, it would mean a smaller yield and harvest, which equates to less money for local farms, according to Guidry.

Strain encountered the same concerns during his inspections, too. "The damage from this storm could impact productivity depending on the weather for the rest of the harvest season," he says.

While preliminary estimates are being floated regarding Hurricane Isaac's impact, the end results won't be seen until after harvesting takes place, Strain notes.

Ever since Jesuit priests first brought sugar cane to south Louisiana in 1751, the cash crop has played a major role in local life, one that is renewed every year around this time.

That's because September and October mark the start of harvest season, a time when cane is cut and transported to area mills.

Jim Simon, general manager of the Thibodaux-based American Sugar Cane League, says for folks who have grown up around the hustle and bustle, it can bring a sensory overload of memories - chewing on a chunk of cane, watching the trucks move down dirt roads and seeing plumes of steam escape from the mills.

But there's more to the story than that.

"Traditionally, the harvest means jobs, economic activity for our communities and a successful end of a year's hard work," Simon says.
This year, the American Sugar Cane League is reaching out to the general public to remind people they have a role to fill as well, even if they're not directly connected to the industry.

For starters, cane trucks will be on farm-to-market roads in force this season in an effort to beat the winter frost, Simon says. Motorists should take note and proceed with caution.

"If a car is following a big truck too closely, it's difficult for the truck driver to see the vehicle in their rear-view mirrors," Simon notes.
While farmers and truckers will attempt to use less-traveled roads, there may be times when the only alternative is to use busy highways like U.S. 90.

"Tractors can still use U.S. 90 to haul cane," he says. "So drivers need to pay attention and be aware of driving conditions 10 to 15 seconds up the highway."

This is especially important to remember as the time changes this fall and skies begin getting darker earlier in the afternoon.
Simon also asks that if motorists come across mud on a highway or any other hazardous driving conditions, they call Louisiana State Police from their cell phone at *LSP, or *577, with the location.

"A state trooper will be dispatched to make sure motorists are driving safely and the conditions are corrected," he says.
In an effort to summarize the best safety recommendations for the new harvest season, Simon offers the following five tips for motorists: