The Festival of Words is joining a growing trend of fighting state budge cuts in arts funding by appealing to art lovers directly with crowd funding websites like Kickstarter.

Like many of Louisiana's arts programs, the annual Festival of Words literary celebration fell victim to the recent cuts in funding from the state's art organizations. And now, much like its cultural contemporaries over at CODOFIL, the Festival of Words is turning to crowd funding to recoup its losses by launching its own Kickstarter campaign.

"There's not as much arts funding this year as there has been in the past," says Patrice Melnick, executive director of Festival of Words and co-owner of Casa Azul Gifts in Grand Coteau. "We have to find ways that we can make up that difference so that we can still pay the artists that come here for the Festival of Words."

The Festival of Words launched its Kickstarter campaign near the end of September and set a goal of $3,500 that it must meet or exceed by October 24 in order to receive the donations that have been pledged. However, with 46 backers and roughly three weeks left, the campaign has already raised more than $2,100 to compensate this year's featured artists.

In exchange for your generous donation to this celebration of the written word, patrons may receive several rewards for their pledge ranging from a simple mention on the festival website and Facebook page for $1 all the way up $250 where they will receive two books of their choice signed by the festival's featured authors and an overnight stay at Casa Azul Bed & Breakfast. Other prizes include a specially-designed T-shirt, FoW membership and a signed FoW poster.

Now in its fifth year, the annual Festival of Words is slated for Nov. 5-11 with numerous literary activities planned at Grand Coteau and across St. Martin and St. Landry Parishes. The festival has been picking up steam since its inception as a small but committed open mic event at Casa Azul Gifts in Grand Coteau for writers and artists in rural Louisiana whose voice may have otherwise gone unheard. 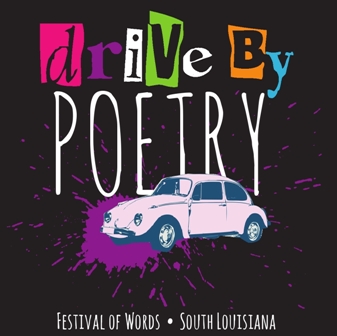 The festival has always embraced the creed that "verse is for everyone" and now features events that reflect this motto. One of those events is Drive-by Poetry, where young writers spontaneously read their poems at unconventional venues like local grocery stores, beauty shops and fast-food restaurants.

For more information on the Festival of Words including a full schedule of its events visit festivalofwords.org. To pledge a donation visit its Kickstarter page here.