The economic recoveries under way nationally and here in Acadiana are far different creatures.

That was the message Thursday morning from leading economic expert Dr. Loren Scott, who delivered his 2013 Economic Outlook for Louisiana and Acadiana to hundreds of local business and industry leaders gathered inside the Cajundome Convention Center for the ninth annual Entree to Business Breakfast - an annual ABiz production.

Scott says since the "Great Recession" hit in 2007, the nation's economic recovery has moved at a snail's pace. The "culprit," he says, is poor economic policy-making. And though Scott warns that state economies are vulnerable to national policy, Louisiana, and especially Acadiana, are poised for continued above-the-bar growth in the coming years.

"We believe (Acadiana) will be the fastest growing part of the state," says Scott, noting the region is experiencing an average 3.5 percent annual rate of growth and is expected to add an extra 11,000 jobs in the next few years.

But the region is not immune to negatives, he says, pointing to the recent loss of Transcomm and a U.S. Postal Service announcement made earlier this year that its Lafayette distribution center is one of eight slated for closure.

Fortunately, according to Scott's forecasts, the positives for Louisiana's economic future seem to outweigh the negatives.

He says the Gulf of Mexico "is back," and with the price of oil up and likely to stay that way, that means drilling. Scott says the number of deepwater rigs is finally approaching pre-BP spill numbers, and despite a more complex application process, the issuance of permits also is on the rise.

The price of natural gas is on the decline - a trend Scott predicts will continue - and the number of rigs operating out of the once-hot Haynesville Shale in north Louisiana has dropped by 80 percent over the last year. Yet, he says Louisiana's economy is still poised to reap the benefits of natural gas production, both statewide and nationally. Scott says the low price of natural gas is causing a spike in demand from chemical and energy producers and other countries, meaning a rise is coming in the business of exportation. 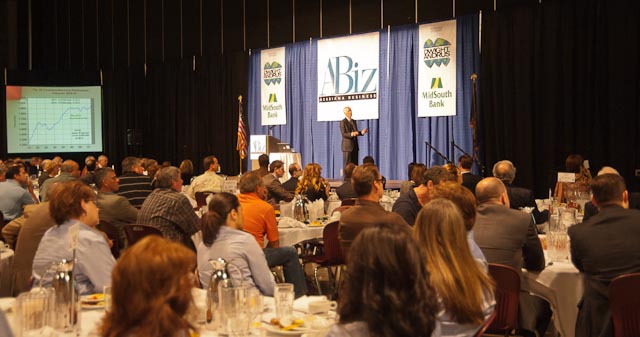 photos by Robin May

Nationally, Scott says the United States has mistakenly responded to the recession by using Europe as a model for its economic policy. Wells Fargo, he notes, is forecasting the nation's Real Gross Domestic Product won't exceed a quarterly growth rate of 2.5 percent through 2014.

"These growth rate numbers are pitiful," says Scott. "This is the worst recovery from any recession since the Great Depression."