Nestled in the old Saloon Bazaar on Jefferson Street is a restaurant earning a local buzz about its Cajun slant on Italian food and the tables with beer taps right at the fingertips. Chad Cormier owns The Pie Hole Pizzeria & Tap and has been working to open the restaurant since February. Cormier and his team have completely revamped the interior to expose brick walls and install a brick oven for all of the artisan pizza made to order. The dough is always same-day - made today, used today. Cormier serves as the head chef, and says anything ordered is made on the spot. The pizza crust is thin but truly has a flavor of its own, including a smattering of Mediterranean herbs and a sea salt-sprinkled crust that is the perfect surprise to end a slice. Choose between a hearty red sauce or a deliciously creamy white sauce for the pizza, which can be a personal four-slice or a large 16-inch pie.

"I make the crust my own way," says Cormier. "We definitely put a twist on it - we're not in the realm of ordinary."

Of the restaurant business, Cormier says it's "definitely a family affair." He opened The Station in Broussard with his brother Marc in 2005 and worked with his five siblings there. When the Jefferson Street location opened, Cormier jumped at the opportunity. "It's foolish not to capitalize on this location."

The Pie Hole's veggie pizzza with chicken and white sauce.

Cormier says the menu's standouts begin with the macaroni and cheese with fried duck wings. The macaroni is drenched in three cheeses: Velveeta, sharp cheddar and smoked gouda, and the duck wings are smothered in a pepper-jelly-and-pineapple sauce. The duck quesadillas also come highly recommended, with a pastry stuffed with the duck breast meat, onions and peppers and served with a sweet chili dipping sauce. For a pizza pie that can't be missed, try the Jackson 5, named after Cormier's son, a blend of pepperoni, beef, ham, chicken and bacon. The veggie pizza is also delicious with sun-dried tomatoes and white sauce. 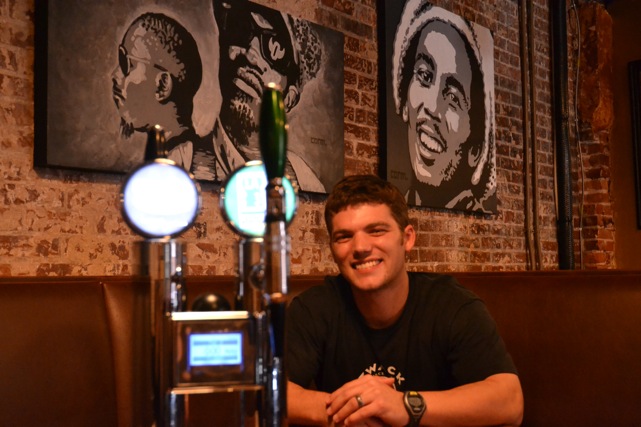 Owner Chad Cormier at one of the Pie Hole's draft tables.

The restaurant's food isn't its only appeal, though. Wander in and sit at a draft table, Lafayette's only such self-serve table-top tap. "They work like a gas station pump," says Cormier. Three of the restaurant's tables have two taps installed into the center of the table, and they can be switched out for those who specifically reserve a table. Choose from 26 different beers on tap, or ask for root beer. The tap is wired to the cash register, so there's no middle man for beer service.