Grant Street Dancehall has had its ups and downs this year as far as consistency in its performance schedule, but now it looks like it's back on track to becoming one of the bigger venues for bands downtown. Take for instance its lineup for Tuesday, Nov. 20.

Grant Street Dancehall is attempting to fill the void of downtown Lafayette's weekday nightlife scene by scheduling early weekday shows like the one it's holding this Tuesday night with Lafayette locals The Cavemen and Brand New Bag opening up for New Orleans natives Caddywhompus.

Opening the night up is The Cavemen, a three-piece alt rock set with a slight psychedelic slant formed back in summer 2009 to reclaim the tattered visage of the caveman from the failed mascots of the Geico commercials, which ran rampant through much of the 2000s.  The Cavemen bring with them a cunning energy felt immediately when the first string is strummed that lingers until the last snare is bashed. They're also part of the Cloudheavy Recording Company, which counts Brass Bed and Dorian Phibian as members among others.

Next up is Brand New Bag, a nice throwback to the heydays when bands needed to erect make-shift chicken wire shielding in front of the stage to guard against fly-by beer bottles and spontaneous roadhouse brawls. Over the last year, Brand New Bag has been stepping in to help satiate the local hunger for old school Southern rockabilly sounds still caked with Mississippi delta blues. Their Facebook description sums them up best, "Hits the head like hot moonshine in the eye of a hurricane." 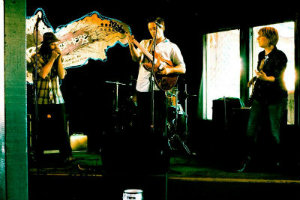 And closing out Tuesday night is New Orleans experimental rock duo Caddywhompus, which roughly translates to "chaotically off-balance," which should be taken as a sign of the band's kinetic stage presence. After hearing them and realizing that they aren't secretly Animal Collective touring incognito, don't be surprised if you find yourself hopelessly infected with their pop demolitionist brand of noise rock.

Doors open at Grant Street Dancehall Tuesday, Nov. 20, at 9 p.m. for $5. To find more details, and links, for all three bands check out the Facebook event here.