The bowl season will be a joyous one in Louisiana - with one notable exception: LA Tech.

The bowl season will be a joyous one in Louisiana - with one notable exception. 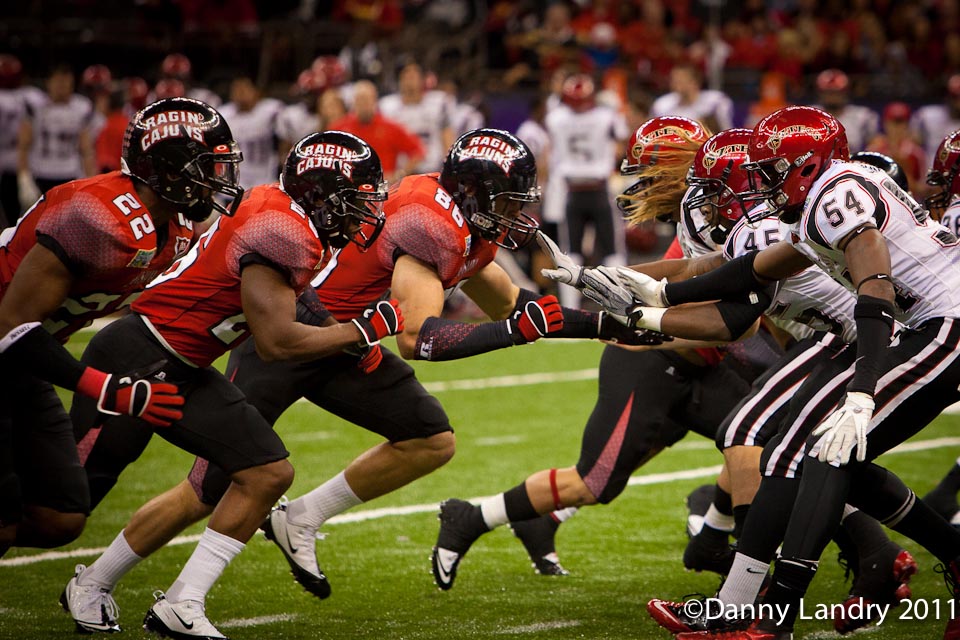 LSU, despite getting snubbed by a couple of high-end non-BCS bowls, still winds up with a solid matchup against Clemson in the Chick-fil-A Bowl. Two other schools in the state are in bowl games, and they don't even have to leave Louisiana to reach their bowl destinations.

A fourth state school should have been in the bowl picture - and would also be playing within the state's borders - but now it's sitting at home, pondering its own foolishness.

Louisiana Tech could have been in Shreveport, setting up an unprecedented bowl cornucopia for Louisiana football fans and a boon for a state economy that is in lean times. The Bulldogs also had opportunities for more prestigious bowls not many weeks ago (Tech was for a while the "BCS Buster" instead of Northern Illinois) before losing two straight to end the regular season.

But those losses didn't close all the doors. Tech's phone still rang; the Bulldogs got the call with an invitation - at least twice - but because of arrogance or incompetence (in this case, it's not certain which is worse), Tech isn't in any of the country's 35 bowl games.

More on that later. First, the positives: 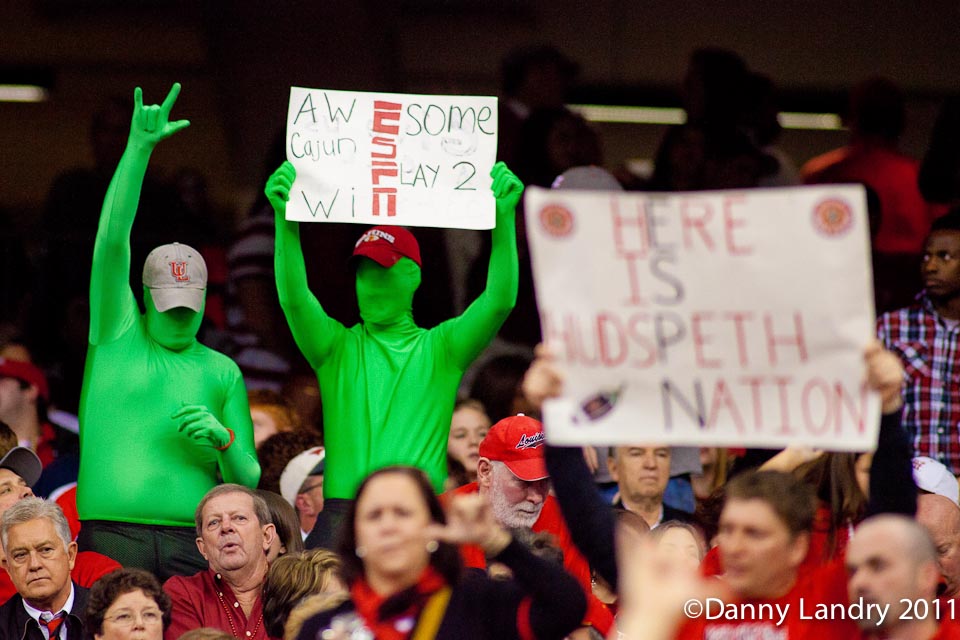 UL's goal last year was not to paint the town red, but to "Paint the Quarter Red." The Cajuns did that in a big way, and not just with the pulsating 32-30 last-play win over San Diego State in the R+L Carriers New Orleans Bowl.

The 11-year-old bowl's highest-ever attendance was 30,228 in 2009, and that record was basically gone on the night the Cajuns were invited to their first-ever Division I bowl game. By the time it was over, 42,481 were on hand in the Mercedes-Benz Superdome - a 46 percent increase from the previous year, a 41 percent increase from the old attendance record and more fans than 14 other bowl games drew last season.

Among the games the New Orleans Bowl outdrew was the Independence Bowl (41,728), and the Big Easy game wasn't far behind both the long-established Outback Bowl and the Hyundai Sun Bowl.

UL sold approximately 18,900 tickets through its on-campus ticket office, by far the largest sale of ticket allotment in New Orleans Bowl history. At  an average cost of $50 per ticket, that was a nearly $1 million boon to the Cajun athletic department. Many schools playing in non-BCS bowl games struggle to sell ticket allotments and end up losing money on bowl games, but the Ragin' Cajuns laughed all the way to the bank in 2011.

So did bowl officials, who had a significant sale locally in the Crescent City area to UL fans and alumni. The record sales and crowd came despite San Diego State having only a small contingent of followers, and that should change this year with East Carolina providing the Cajun competition for the Saturday, Dec. 22, 11 a.m. contest. 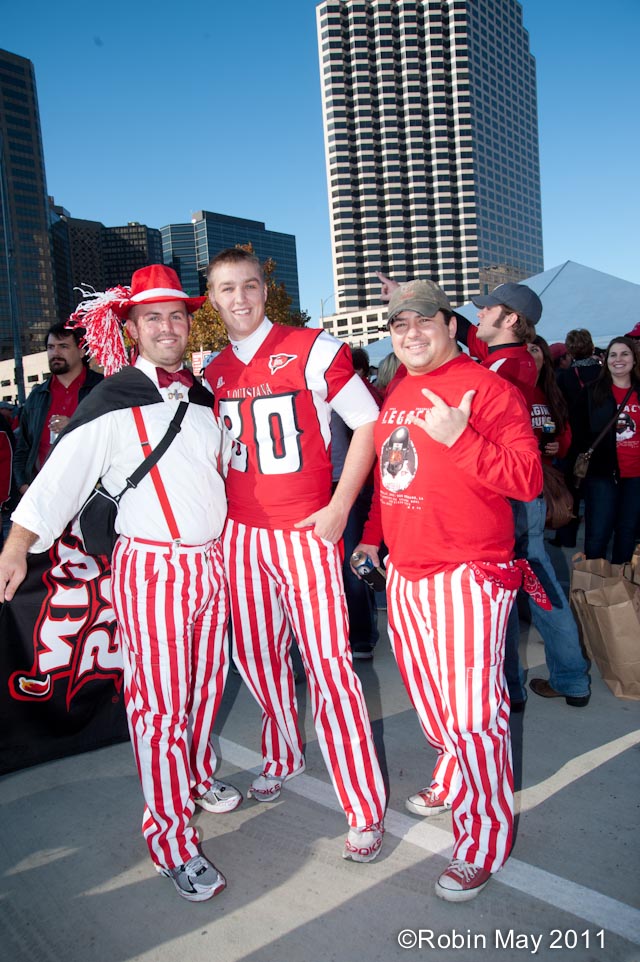 The Pirates went 7-1 in Conference USA play (8-4 overall with losses to North Carolina, South Carolina and Navy), but the more important figure to the New Orleans Bowl is 47,013. That was ECU's average attendance in six home games this year - by far the highest among the country's non-automatic qualifying BCS conferences (the next-closest is 35,809 at Central Florida). The Pirates never drew less than 45,000 at any game this year - or last year.

If only a fraction of that following makes the trip to New Orleans the week before Christmas, this year's game could hit the 50,000 mark, which would put the New Orleans Bowl in the top half of the nation's bowl group.

The attendance should be greater, but it'll be nearly impossible to match last year's finish when Brett Baer drilled a 50-yard field goal with 0:00 on the clock to give the Cajuns an improbable win. SDSU quarterback Ryan Lindley and wide receiver Colin Lockett linked up three times for touchdowns, the last one with 35 seconds left to give the Aztecs a 30-29 lead. But game MVP Blaine Gautier - who threw for a bowl-record 470 yards and three scores - drove UL to the SDSU 38 with four seconds remaining, and a five-yard penalty on the Aztecs just before the field goal gave Baer five more yards to work with.

That success shouldn't have been a surprise. Baer has since become the NCAA's No. 2 all-time career leader in field goal accuracy (41-of-46 in his career). But the other main character in UL's bowl win last year has changed, with Gautier going down with a broken hand in the Cajuns' win over Tulane and sophomore Terrance Broadway taking over as full-time quarterback starter. And even though the Baton Rouge native didn't start the first two league games, Broadway led the Sun Belt in total yards and passing efficiency in conference games.

WARHAWKS FINALLY GOING BOWLING
UL Monroe had never even had a winning record since moving into Division I-A (now FBS), but it was obvious from the season opener that would change. The Warhawks knocked off then-eighth-ranked Arkansas 34-31 in overtime in Little Rock to start the season, and after close losses to Auburn and Baylor the next two weeks, ULM reeled off five straight victories.

Losses to the Cajuns and Sun Belt champ Arkansas State slowed things somewhat, but ULM still ended the season with a two-game win streak and finished at 8-4 (6-2 in the Sun Belt), its most wins since 1993 when the then-Indians were in Division I-AA (now FCS).

That was enough to draw the attention of the Advocare V100 Independence Bowl in Shreveport, which issued an invitation not long after ULM's season-ending overtime road win at preseason Sun Belt favorite FIU.

ULM will face Ohio out of the Mid-American Conference on Friday, Dec. 28, at 1 p.m. at Independence Stadium. The Indy Bowl has tie-ins with both the SEC and ACC, but both are well down those leagues' lists of bowl obligations and neither league had enough bowl-eligible teams to fill their quotas.

The Shreveport bowl is hoping ULM generates the same type of first-time bowl excitement that the Cajuns did in New Orleans last year. That may be tough since the Warhawks averaged well under 20,000 in home games at Malone Stadium this year, but ULM fans will certainly outnumber those of an Ohio University team that started 7-0 and then lost four of its last five.

The Bobcats may have to travel much farther than ULM's quick jaunt down I-20 West, but they will have the advantage of bowl experience. Ohio took a 24-23 win over Utah State in last year's Famous Idaho Potato Bowl (formerly the Humanitarian Bowl) for their first-ever bowl win, rallying from 13 points down and getting a game-winning one-yard run from quarterback Tyler Tettleton with 13 seconds left.

But if it's quarterback heroics you want, ULM's Kolton Browning has provided more than his share. Browning engineered the upset over Arkansas and also led an improbable 43-42 comeback victory over Western Kentucky, and finished his regular season with 27 touchdown passes - giving him 58 in his career with another season to go.

And if it's thrills you want, ULM played four overtime games this year, going 3-1 and losing in extra time only to Auburn when the Warhawks went oddly conservative in the extra period and lost on a Tiger field goal.

BULLDOGS NOT GOING ANYWHERE
The Shreveport Times newspaper called it "the biggest local sports blunder in recent memory," and it's hard to argue with that.

Louisiana Tech at 9-3 is one of two bowl-eligible teams in the country not headed to a bowl game. Ironically, the other is 8-4 Middle Tennessee - two teams headed to the revamped Conference USA where both are saying such a snub will never happen again.

(By the way, don't be too quick to assume that. Given the lineup joining that league, C-USA maintaining its current total of five bowl tie-ins is an optimistic forecast.)

But at least Middle didn't turn down an invitation. Supporters of the Blue Raiders, who depart the Sun Belt in 2014 for perceived greener pastures, insist that Sun Belt Commissioner Karl Benson had a hand in MT getting the snub from all the bowls. Benson denies such involvement, although it would be hard to blame him for promoting teams that still hold league membership in the foreseeable future.

The Bulldogs had a bid in hand. The Independence Bowl, located 90 minutes west of Ruston, reportedly gave them two chances - one last Friday and one last Saturday - to accept an invitation to a game it last played in following the 2008 season.

Tech AD Bruce Van De Velde claims he never turned down a bid, and only asked for additional time while hoping for more offers to roll in. Those didn't come. And if Van De Velde thought some were coming, he was either ill-informed, naïve to the ebb and flow of the bowl system, or just arrogant.

Van De Velde said he was hoping for Tech to get a bid from the Heart of Dallas or the AutoZone Liberty Bowl. The former was never in play since the Big 12 and Big 10 had plenty of bowl-eligible teams to fulfill their contracted obligations there (ill-informed), and the latter became out of reach when Northern Illinois' top-16 BCS finish bumped Oklahoma out of the BCS bowls and gave the Big 12 an available at-large team for the Liberty. The Liberty, home of the C-USA champ, was not about to take Tech or even nearby Arkansas State - ASU would have been the choice for bowl ticket sales after drawing 31,000 in its home finale - over an available Big 12 team (naïve).

Van De Velde cited the domino effect from NIU's jump from No. 21 in the BCS rankings and qualifying for a BCS bowl, saying that he thought there was no chance of that happening. That's also a shaky excuse, since anyone with a modicum of knowledge on how the BCS ratings operate could tell there was a possibility - especially when the Nos. 16, 17, 18 and 19 teams all lost, three of them as underdogs. Besides, had Kent State topped NIU on Friday night, the scenario would have been the same, and by that time the Bulldogs had already brushed the Independence off at least once.

First reports were that Tech did not want to face ULM in the bowl. Van De Velde denies that was a factor, but there aren't a dozen people in North Louisiana that fully believe that - and the non-believers are on both sides of that athletic-hatred fence. Even Bulldog fans - who have tried to distance themselves from the Warhawks for years - have been expounding that a bowl game against ULM is better than no bowl game at all.

Since the weekend, Van De Velde has been playing damage-control, throwing rocks at the bowls and the system to cover his own colossal blunder. But it's going to take more than aspersions and excuses to satisfy a loyal fan base and the 31 senior squad members who ended up with coal in their Christmas stocking.