XstremeMD, a Lafayette-based telemedicine provider, is saving lives in the oil and gas industry.

During a morning meeting on an oil and gas platform 100 miles offshore, Barry Albarado started having severe stomach pain. "It was almost like going eight rounds with Mohammed Ali, a rope-a-dope in my stomach," he recalls. "I was sitting down, and I could not get comfortable. It was very irritated."

Albarado went to the company safety representative and described his complaints. The safety worker said, "Let's take a walk over to Doc-in-the-Box and have him check you out." 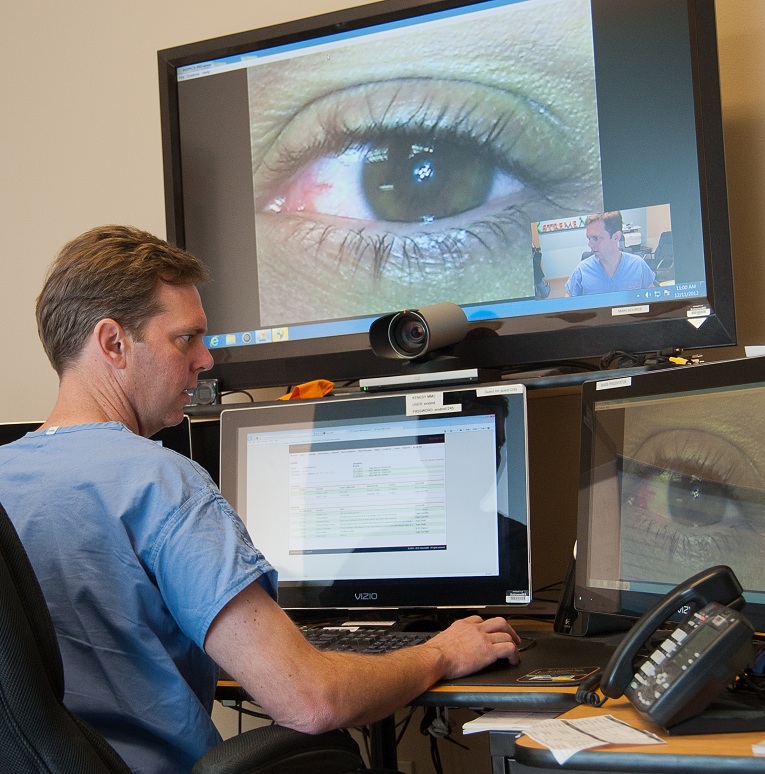 Dr. Joseph Pearson, president and founder of XstremeMD, examines a patiently remotely
from Our Lady of Lourdes. Photo by Robin May

Using the XMD Responder, a "black box" containing all of the necessary digital and medical instruments to perform an evaluation, Pearson was able to virtually examine Albarado from a command center at his Lafayette office through a remotely controlled high definition PTZ (pan, tilt and zoom) camera. With 34 years in the oil and gas industry, Albarado had seen lots of technological changes on platforms. But this was the first time that he had ever accessed a physician merely by pressing a button on a remote control.

Following Pearson's directions, a paramedic on the platform took Albarado's vital signs and transported real-time images to the doc through the camera. During the exam, Albarado talked to Pearson one-on-one, just as if they were in the same room. Pearson asked his patient exactly where the pain was located, and prescribed pain medication for him. Medicines are locked within the XMD Responder, which contains prescriptions to treat everything from a heart attack to the flu.

Pearson instructed Albarado to take the helicopter back to Galliano. As he was driving back home to Carencro, Albarado's pain started increasing. By the next morning, it was unbearable. His wife brought him to the emergency room at Our Lady of Lourdes. By coincidence, the ER physician on call was one of Pearson's partners in XstremeMD. The doctor diagnosed him with a kidney stone, which was later removed by a urologist.

Because of XstremeMD, Albarado wasn't still on that platform when the pain got unbearable. For him, XstremeMD was a life-saver. "We are, at minimum, an hour away from shore - that is, if the helicopter is fired-up and ready to go," he explains. "So, if everything goes right, you are still two hours away from help. Transportation is a very expensive cost out there. So, the ability to see a doctor right away is very comforting."

Since its initial launch in 2009, XstremeMD's business has skyrocketed, with more than 20 oil and gas customers including Nabors Drilling, Shell Oil Co., ConocoPhillips, Murphy Oil and Nexen Petroleum. Currently, the docs operate in about 30 offshore and land-based locations throughout the Gulf of Mexico and Texas. In just three years, XstremeMD has treated thousands of cases in the industry. The company employs eight medics and plans to hire an additional 10 to 15 over the next few months. "We have grown from six employees up to about 19 over the last nine months," Pearson says. "We will probably be at 30 employees by the first quarter of next year."

During the interview with Pearson, this reporter got to experience the need for this service first-hand. In the brief time of the interview, Pearson received five consecutive calls for emergencies ranging from an asthma attack to chest pain to a foreign body in the eye. "With the PTZ camera, I can look in the eyes and ears and listen to the heart, lungs and the back of the throat," he explains. "I can also do an EKG."

Once the patient is in the system, the Lafayette docs can pull up their electronic medical records in-office and access prior examinations, medications and test results. XstremeMD's infrastructure allows its ER docs to consult with other medical specialists simultaneously. "We can treat anything from athlete's foot all the way up to a heart attack," Pearson says.

Having immediate access to a physician from a remote location can mean the difference between life and death. "If you have chest pain, by the time that you get in a car and drive to the ER, or call 911 and wait for an ambulance, you are looking at 20 minutes in the most ideal setting," Pearson says. "We can do an EKG in seconds - quicker than a company can get a helicopter to take a worker from a platform to the beach. There are narrow windows of opportunity for some of these people."