It's not all about football for UL's Ragin' Cajuns during the R+L Carriers New Orleans Bowl. The squad got to visit and experience a New Orleans institution Tuesday night ... going Rock 'N' Bowling. Tuesday, 8:30 p.m.

One of the pleasures of taking part in a New Orleans-based college football bowl game is ... well, going bowling.

As is tradition for teams coming to the Crescent City for bowl games - be it the New Orleans Bowl, the Sugar Bowl or the once-every-four-years BCS National Championship Game - the players and staff get the opportunity to visit an iconic piece of New Orleans at Rock 'N' Bowl.

The part-bowling lanes, part-music venue, part-night spot has been a Crescent City institution for years, and the Cajun squad spent nearly two hours partaking in the food and festivities of the bowl's official player party. And some also showed some talents not normally evident on the field.

Offensive lineman Daniel Quave of Gautier, Miss., had the high game among the group, posting a 148 game that included three strikes and eight marks. Wide receivers Brandon Stewart of Shreveport and Darryl Surgent of Alexandria - whose punt-return touchdown was a huge play in last year's 32-30 New Orleans Bowl win over San Diego State - both showed some singing talent on a stage once walked by Irma Thomas and a host of other New Orleans musical legends. 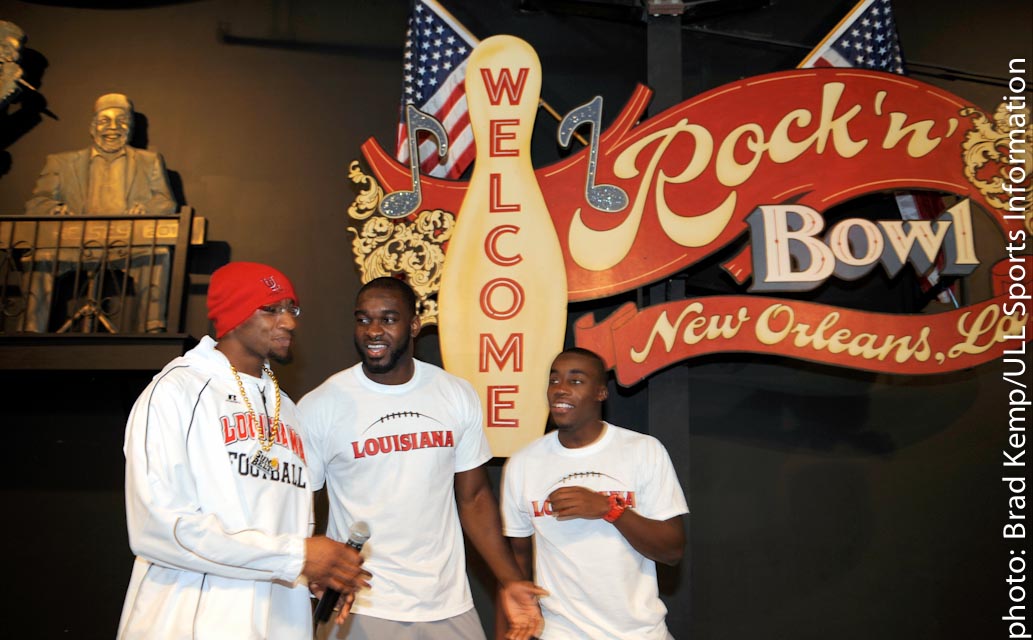 East Carolina, the Cajuns' opponent for Saturday's 11 a.m. game at the Mercedes-Benz Superdome, gets its turn at Rock 'N' Bowl Wednesday night.

Mostly, Tuesday's nighttime outing was a chance for the squad to blow off steam before getting back to the business of football on Wednesday. The Cajuns are scheduled to practice from 1-3:15 p.m. at City Park's Tad Gormley Stadium Wednesday and will get into the Superdome on Thursday for a 10:30 a.m. workout.

ON THE AIR: The best way to keep up with the Cajuns at the New Orleans Bowl, besides here on theind.com, is through the three to four shows that Sports Radio ESPN 1420 will be airing live from New Orleans every day beginning Wednesday.

Steve Peloquin and Dan McDonald will have "Thinking Out Loud" from 7-9 a.m. Wednesday-Friday live from the lobby area of the New Orleans Marriott, headquarters for the UL delegation. Jay Walker hosts "Bird's Eye View" from 2-4 p.m. and Scott Prather hosts "The Great S.C.O.T.T. Show" from 4-6 p.m., both from Walk-Ons on Poydras St.

In addition to those shows, UL coach Mark Hudspeth has his weekly radio show from 7-8 p.m. Thursday and Gary and Shannon Wilkerson host "Oh Brother" from noon-2 p.m. Friday, both from Walk-Ons.

WHAT ARE THE ODDS?: There's an Arby's restaurant right next door to the Marriott on Canal Street, and one of the counter crew is a former East Carolina football player. Desmond Hood, a native of Fayetteville, N.C., was an outside linebacker on the Pirate squad that featured quarterback Jeff Blake from 1987-89.

The Cajuns played ECU once during that stretch, winning 48-36 in 1988 at Greenville, N.C., behind quarterback Brian Mitchell.

KEEPING THE PEACE: Two of the Louisiana State Police troopers who are traveling with the Cajun team this week are familiar names to long-time UL football fans.

Chris Owens started in UL's' offensive line in 1986 and played a key role in one of the Cajuns' previous wins over East Carolina, helping UL post a 21-10 victory that year in Greenville.