That activity will increase exponentially during the day on Thursday, and full-fledged fan events begin Thursday night and will continue right up to Saturday's 11 a.m. kickoff against East Carolina in the Mercedes-Benz Superdome.

Between now and then, UL fans will parade, luncheon, rub shoulders with the Cajun team, maybe dance, go concert-viewing and join in with tailgating activities. Somewhere along the line, food and drink will also squeeze into the agenda.

"There's a lot of opportunities for our fans," Farmer said. "But with our fans, it's mostly the good times they have with each other. The activity itself doesn't matter nearly as much as the spirit they bring." 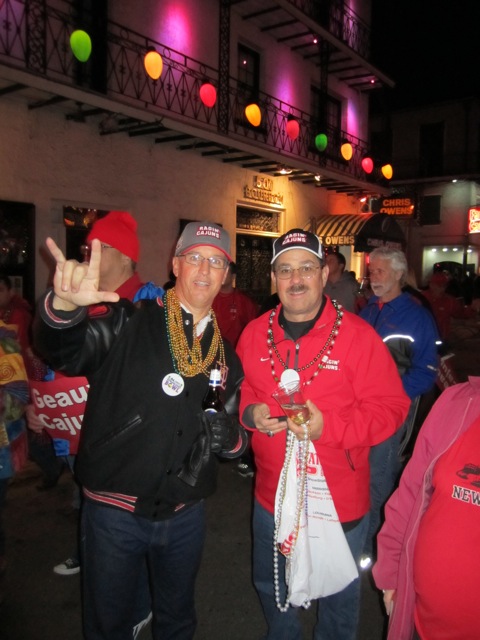 Those activities begin at 9 p.m. Thursday from the front door of the Marriott on Canal Street, where anyone that wants to participate may follow the UL band and "second-line" parade to and down Bourbon Street.

"We had a couple hundred people last year when we left the hotel," Farmer said. "By the time we got halfway down Bourbon Street, I couldn't even see the band in front of us since so many people had joined in."

The parade is sponsored by MidSouth Bank, and fans are encouraged to bring Mardi Gras beads to throw to the likely-confused bystanders up and down Bourbon.

Activities continue at noon Friday with the official bowl luncheon at the Marriott, with Hall of Fame quarterback Warren Moon the guest speaker. Tickets are $40 and are still available through the bowl office at (504) 525-5678.

The second annual Ragin' Cajun Fan Fest begins at 3 p.m. Friday, also inside the Marriott. The reception is sponsored by Home Bank and features music by Roddy Romero and the Hub City All-Stars, complimentary beer and soft drinks, and an appearance by the Cajun football team following its walk-through Friday practice. Fans who have not picked up will-call tickets may also pick those up at the Fan Fest.

That will end just in time for the red-clad masses to head to Champions Square, adjacent to the Superdome, for the Friday night concert. The Beach Boys, America's quintessential band, and iconic classic rockers Bad Company with Brian Howe, will begin performing shortly after 5:30 p.m. in a free and open-to-the-public concert. Food and drink will be available for purchase, and a bus will deliver fans from the Marriott to Champions Square from 6-9 p.m.

Pre-game activities Saturday include the RCAF/Alumni Association tailgate gathering in the Superdome's Bienville Room, open to RCAF Annual Fund donors and Alumni Association members complimentary and a $10 charge for other fans, from 8:30-10:30 a.m. with Krossfyre performing. There's also a tailgate party from 7:30-10:30 a.m.  in the parking lot of nearby Rouse's Supermarket, where Sammy Kershaw will be performing, and the bowl has its official tailgate party at Champions Square from 9-10:30 a.m. with music by Band Camp.

If you're coming from Lafayette, bring something warm to wear for the Thursday and Friday activities. Storms are schedule to come through New Orleans during the day Thursday, and temperatures will drop to the mid-to-high 30's both Thursday and Friday nights.