The UL quarterback had been engineering one of the country's top offenses over the final half of the 2012 college football season, and he knew East Carolina was out to stop him. 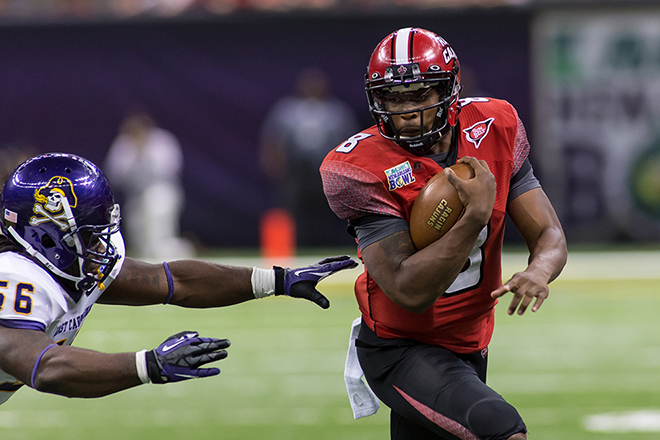 "I read a couple of articles from this week and they said how they were going to key in on me," Broadway said. "Coach Johnson (UL offensive coordinator Jay Johnson did a really good job of dialing up those big plays to attack them when they were keying on me."

That strategy didn't work on a couple of different levels, and because of that the Ragin' Cajuns now have two straight New Orleans Bowl titles. 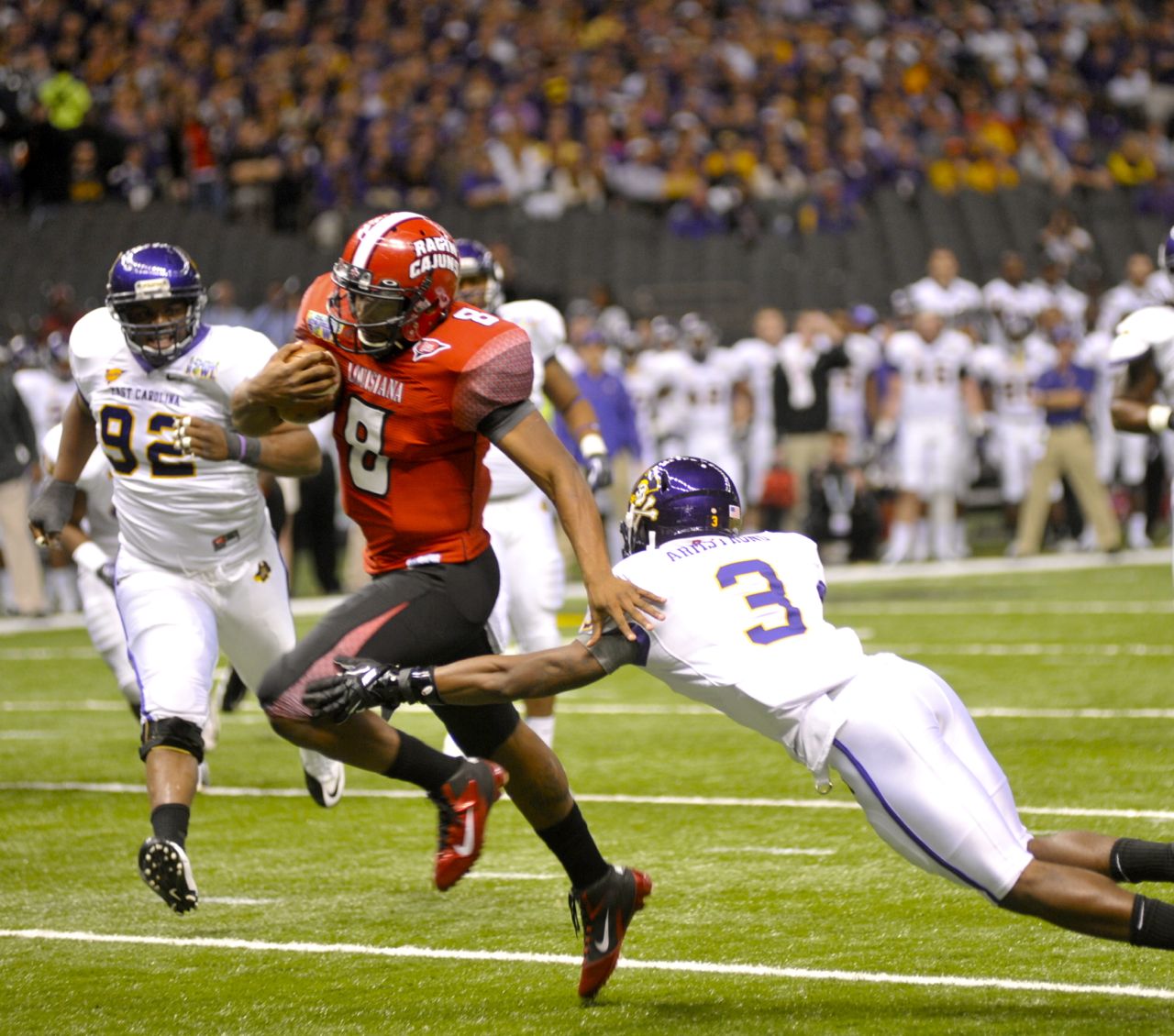 Broadway finished off a record-setting season in style, rushing for one score and passing for another and churning out 424 yards of total offense in leading the Cajuns to a 43-34 victory over the Pirates.

The win capped a second straight nine-win season for coach Mark Hudspeth's 9-4 Cajuns, giving them the most successful two-season streak in the program's century-long history.

"I'm so very proud of this football team," Hudspeth said, "not just for the way they played tonight but the way they prepared for this game. These guys continue to blow me away with how they do the right things, how they take the hard work serious, how they prepare, watch film, lift weights and do everything we ask."

On Saturday, he asked Broadway to guide an offense that he knew would have to produce in a big way, to keep pace with East Carolina's high-octane attack. And the sophomore delivered in a big way.

Broadway capped off his first UL season with his third 100-yard rushing performance in the Cajuns' last four games, going for 108 yards and a score to go with a 316-yard passing performance in leading the offense to the second-highest yardage output in bowl history.

He was an easy choice as the game's MVP, an honor that thrilled the 30-odd friends and family members that watched the Capitol High product end his sophomore season in fine style.

"We didn't even know if he was going to play this year," said cousin Naomi Dunbar, who was part of a handful of "Team Broadway" members that proudly wore No. 8 jerseys in the front row of the Superdome, right in front of the Cajun bench. "We were all nervous as we could be, but we're definitely happy now. This is what he's been waiting for."

Broadway had a 12-yard touchdown run, pulling the ball back from tailback Alonzo Harris on an option to the left side and scoring untouched to give UL an early 7-0 lead. Then, after the Pirates had rallied from as much as a 28-7 deficit to tie the game at 31 midway through the third quarter, he engineered a quick seven-play, 76-yard march capped by a 14-yard scoring toss to Javone Lawson with 3:07 in the period that gave the Cajuns the lead for good.

From there on, the Cajuns turned it over to the defensive unit to slow down an ECU offense that scored points in six of eight possessions in the middle two quarters. But the Pirates' final four possessions generated five, 26, five and 10 yards and never came close to a score.

"Our defense stepped up tonight," Hudspeth said. "They really played well at times. East Carolina made a couple of big plays and caught us in some looks. Give them credit, they're a good football team and they battled back right into the football game."

After Broadway's scoring pass to Lawson, ECU rallied and drove 70 yards to the Cajun 9 before running out of downs and settling for a 26-yard Warren Harvey field goal that cut the difference to 37-34. But from then on, UL's defense rose up.

"We found a way to win," said senior Emeka Onyenekwu. "The coaches are always telling us that big-time players make big-time plays, and that's what we did in the fourth quarter. We just went and got it."

Brett Baer, the hero of last year's 32-30 New Orleans Bowl win over San Diego State, hit a crucial 25-yard field goal with 5:01 left to make it a six-point game. Then, after the Pirates came up short on a fourth-down try deep in their own territory in the final three minutes, Baer toed through a clinching 39-yard field goal with only 10 ticks remaining.

"I try to go into every field goal thinking the same thing," said Baer, whose 50-yard field goal on the last play gave UL last year's bowl win. "But I knew if I could make one more field goal in my career, it would ice a win for us."

He had matched that historic effort at the end of Saturday's first half, toeing through a nearly-identical 50-yard field goal that gave UL a 31-21 halftime lead. That tied his own mark for longest field goal in New Orleans Bowl history. 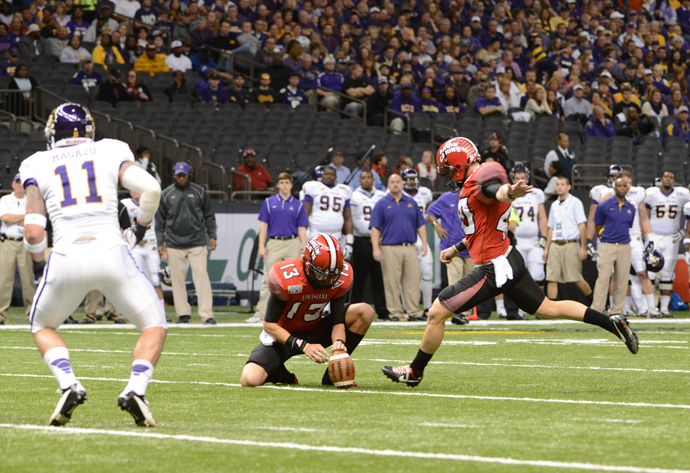 "There wasn't as much pressure on that one," he said of his long Saturday kick. "But our offense has taken the pressure off everyone all year. If Terrance had some of those fourth-downs back, he'd want to go for touchdowns and I'd be all for that. I like watching our offense." 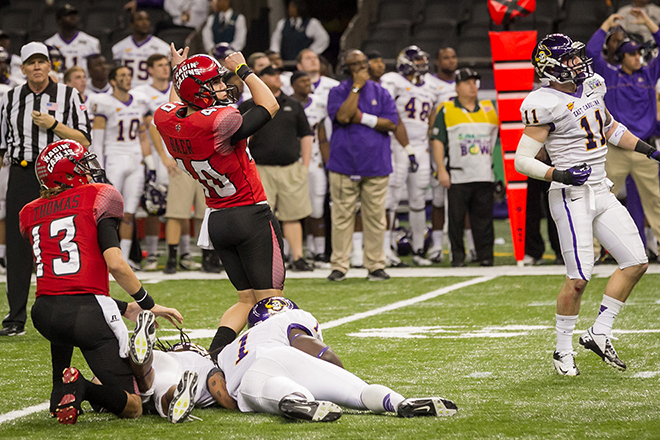 He liked watching Broadway for sure Saturday, especially when the Baton Rouge native was up on the quickly-erected awards stage right after the game. Broadway was clutching two very precious things in his arms ... one of them his son Terrance, Jr. 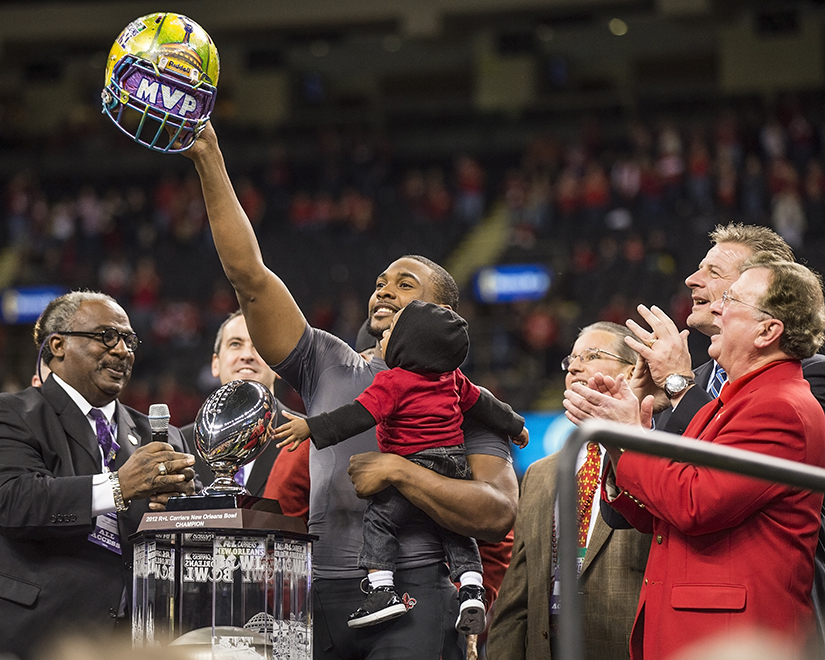 "He means the world to me," the elder Broadway said. "Everything I do is for him."

In his other hand, he had a death grip on the bowl's unique Most Valuable Player award, just like he had a grip on what East Carolina's Pirates were doing on defense.

Few thought that Broadway was going to be a target for any teams' defenses during the Cajuns' 2012 season. He entered the year as backup to returning senior Blaine Gautier, the Most Valuable Player in last year's New Orleans Bowl after a 470-yard throwing performance. But Gautier went down with a broken hand in the season's fourth game, and Broadway was abruptly thrown into the starting position.

"You never want to lose your starting quarterback, especially a senior," Hudspeth said. "But Terrance came in and had a phenomenal season.

"The Monroe game is when Terrance really looked like he felt comfortable. The light came on for him, and he took us on his back. The second half of the season, we were playing offensively as well as anyone in the country."

Even though he didn't start the first two Sun Belt Conference games of the season, Broadway ended the year leading the league in total offense by a wide margin (337.9 yards per game) as well as in passing efficiency. He also led the Cajuns and ranked fourth in the Sun Belt in rushing (73.6) in conference games.

"He's a true dual threat," said ECU coach Ruffin McNeill. "Watching him on film, he's done a good job against all of their opponents, especially Florida. Their offense did a good job of maintaining what Mark (Hudspeth) wanted offensively. He did a good job leading his team."

Broadway provided most of ULL's 591-yard attack - the second highest team output in New Orleans Bowl history. The only drive he didn't engineer came in the second quarter when Hudsepth inserted Gautier into the game when the Cajuns had the ball at their own two-yard-line ... and scored five plays later on Harris' bowl-record 68-yard run.

"Those are two outstanding leaders," Hudspeth said. "I don't know if anyone in the country has two quarterbacks like we have."

The Cajuns needed just about every one of them, after the Broadway-led offense posted touchdowns on four of their first five possessions and built a 28-7 lead. Midway through the third quarter, though, the Pirates had battled back to that 31-all deadlock.

"We were still upbeat," Broadway said. "Nothing fazes this team, whether we're up by 20 or down by a couple. With what we went through earlier this season, we can respond to adversity."