Marques Colston never goes out of his way to be noticed.

METAIRIE, La. (AP) - Marques Colston never goes out of his way to be noticed.

He became the New Orleans Saints' all-time leader in touchdowns scored this season with 56, yet does not have a touchdown dance. He seldom appears in commercials, and is often hard to find when the locker room at team headquarters is open to reporters. 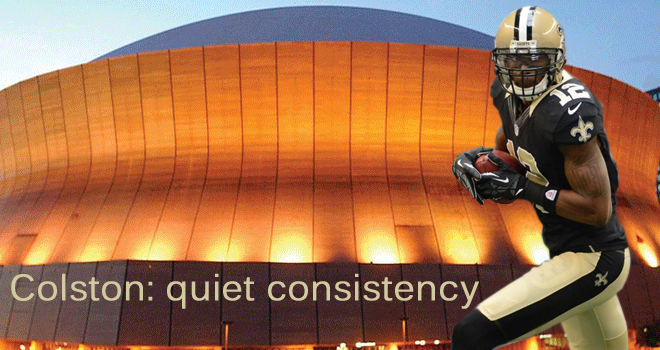 At Dallas last Sunday, Colston's 10 catches for 153 yards put him over the 1,000-yard mark for the sixth time in his seven seasons. Yet he has never been to a Pro Bowl, which disappoints teammates such as quarterback Drew Brees.

"He is Mr. Dependable, Mr. Steady. When you need a play, I know I can always count on him," Brees said Wednesday. "He's a quiet guy, but when he comes to work, he's ready to work."

Brees said he loves Colston the way he is and would not want him to change, but figures the slender, 6-foot-4 receiver's introverted nature probably works against him when it comes to getting the recognition he deserves.

"How do guys get noticed for the (Pro Bowl's) fan vote and for everything else?" Brees asked rhetorically. "If you're not saying something that's getting you on TV or what have you, then a lot of times people don't notice you if you keep the helmet on and just work. You don't have a touchdown dance, but there's no guy that's been steadier than him at the receiver position."

The only season in which Colston compiled fewer than 1,000 yards receiving was 2008, when a hand injury limited him to 11 games and he finished with 760.

Since Colston entered the league as a seventh-round draft choice out of Hofstra in 2006, only three players in the NFL have caught more touchdown passes. Arizona's Larry Fitzgerald has the most at 59, just three more than Colston, while San Francisco's Randy Moss has 58 and San Diego's Antonio Gates has 57.

In addition to Colston's numbers, the Saints talk about his toughness - the way he makes difficult catches in traffic over the middle, routinely absorbing big hits. Colston owns an oxygen-rich hyperbaric chamber, and often sleeps in it during the season in hopes of hastening his recovery from injuries or the general pounding he takes.

Colston was not available for comment Wednesday when Pro Bowl rosters were released.

When he did speak to reporters after last Sunday's victory at Dallas, he talked not about his pivotal role in the win, but berated himself for a dropped pass and a fumble in overtime, even though the play on which he lost the ball still set up the Saints' winning field goal after tight end Jimmy Graham recovered it.

"Even with the win, it's personally going to leave a sour taste in my mouth because I can't do that," Colston said. "It's one of those things where I know that can't happen. It's been an issue where I've had a couple this year. It just doesn't sit well with me."

Such a reaction was classic Colston, Brees said.

"You love having guys like that because you don't have to police them. They police themselves."

Colston has never been one to complain about not getting the ball enough or not getting paid enough. In fact, he could have tested the open market last winter, but instead chose to sign a five-year extension worth about $36 million before free agency even started.

That should keep Colston around long enough to break Eric Martin's all-time Saints marks for catches and yards receiving. Colston is second all-time with 527 receptions and 7,342 yards, putting him five catches and 512 yards behind Martin in both categories.

"The thing about the Pro Bowl is ... it's not necessarily about who the best player is," Rivera said. "We're talking about a guy that was on a Super Bowl championship team, too, now. So you'd like to think that somewhere along the line he'd be recognized for what he does."