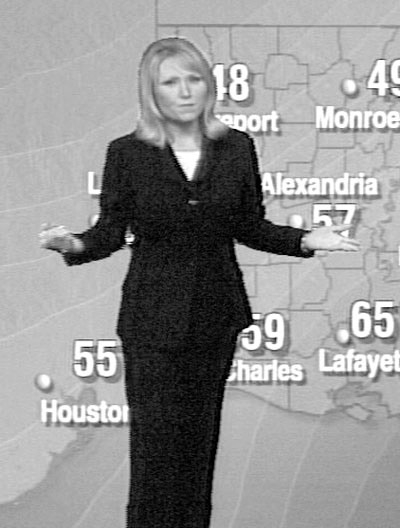 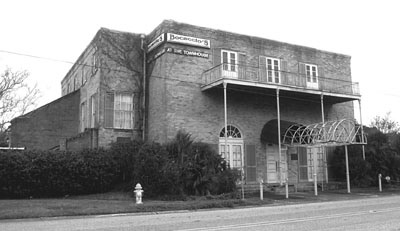 Is KLFY TV10's chief "degreed" meteorologist going the way of most talented broadcasters who cut their teeth at one of Lafayette's two network news affiliates? Local TV industry sources say Sarah Libby is heading to The Weather Channel, the national cable television network that broadcasts 24 hours a day.

Libby, however, isn't talking. "I'm not allowed to talk about it," she says.

Georgia-based The Weather Channel also won't confirm the speculation. "I don't have any information at this time," writes spokeswoman Connie Malko in an e-mail response.

Libby, who joined TV10 in late 2000, was promoted to her current post in December 2003, replacing meteorologist Rob Perillo, who took over the top weather spot at competitor KATC TV3 in early 2004.

Perillo's mentor, Dick Faurot, who has worked for KOTV in Tulsa, Okla., since leaving TV10 in 1993, says he's not being courted to return to Lafayette. "I have not been contacted," says Faurot. KLFY, however, did inquire about his potential interest when Perillo left. Faurot, who returned home to Oklahoma to care for his ailing parents (his father has since passed away), just signed another three-year contract. He worked for TV10 for 18 years.

Other major TV news broke last week when Tom Poehler and Sean Trcalek resigned from TV3. "They came in to me together on Monday afternoon and [resigned], effective that day," says Nannette Frye, the station's general manager. Frye says the departures ' Poehler was general sales manager and Trcalek was regional account executive ' came as a big surprise. They had been with the station for four and almost two years, respectively, though Trcalek had previously worked at KATC for six years.

"People need to do what they need to do," says Frye, who has not yet named replacements. The duo informed her of an opportunity to work for a "competitor," but made it clear they were not going to KLFY. "They didn't feel they were at liberty to share" additional information, she says.

Both Poehler and Trcalek have moved over to newly created positions with Comcorp, Tom Galloway's local media company. Poehler is Lafayette market manager for Comcorp, and Trcalek is director of sales for KADN TV15, the local Fox affiliate, and KLAF TV17, the UPN station.

Though Galloway has run the stations for years under a local marketing agreement, he is just now finalizing the purchase. In December the Federal Communications Commission approved the transfer of the licenses of the two stations from businessman Charles Chatelain to Galloway for $16.5 million, according to Virginia-based BIA Financial Network.

Poehler and Trcalek join the group on the heels of the dismissal of Lori McCarthy, KADN's general sales manager. McCarthy has extensive local television experience, having also previously worked for Cox Media.

Lafayette businessman Art LeBlanc has purchased the vacant Lafayette Townhouse building at 111 Auditorium Place, near the Heymann Center, and is turning it into a Southern Creole restaurant and catering business.

General Manager Paul Scelfo says renovations begin this month, and Townhouse Restaurant & Caterer should open by the summer with the "hospitality and ambiance we would expect to find in an old Southern home."

The pool is being filled in to make way for a garden terrace, with arched glass windows from the 120-seat first floor restaurant offering a view of the gardens. The second floor will feature a 20-foot bar and three private dining areas; the third level will also be available for private functions, as will the garden terrace.

LeBlanc, the owner of Quintess Catering, will continue to operate Quintess from its Pinhook Road location. In October the Cajundome bought out Quintess' contract to provide exclusive catering and concession services.

LeBlanc paid Crowley businessmen David and Peter John $1.25 million for the 2.5-acre Townhouse site, according to the Clerk of Court's office. The John brothers had purchased the property from a prominent Lafayette group ' Charles Chatelain, Tom Galloway, Wayne Elmore and Dr. Paul Azar Jr. ' for $1.03 million in October 2002. Court records show that in 2000, that group paid $850,000 when it purchased the site from Lafayette Townhouse.

The facility was constructed in 1968 to house the private Lafayette Townhouse Club, which is no longer in existence.