Blame the bounty scandal. That's what many in New Orleans are doing, including some Saints. 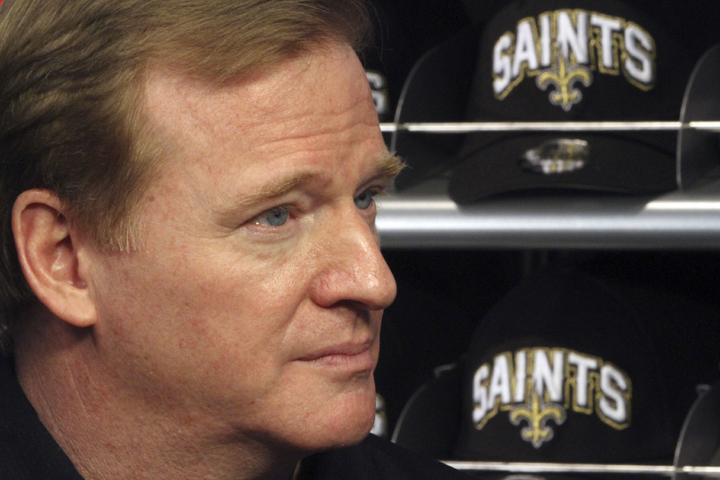 NFL Commissioner Roger Goodell might be the most-hated man in New Orleans.

METAIRIE, La. (AP) - Blame the bounty scandal. That's what many in New Orleans are doing, including some Saints.

They blame it for overshadowing their entire season, for unfairly portraying the team as the NFL's No. 1 sinners.

And they blame it, in part, for a mistake-prone 0-4 start that led to New Orleans not making the playoffs for the first time in four years.

Players and coaches had said they would not allow the NFL's disruptive probe of the Saints' cash-for-hits program and resulting suspensions - including head coach Sean Payton's full-season ban - to become an excuse for failure. At the same time, few at club headquarters say it had no bearing on the club's performance.

"Forever you can equate the two and I think it's fair to equate the two," said linebacker Scott Shanle, now finishing his seventh season in New Orleans. "Never has a coach been suspended for an entire year and it's a pretty big deal when you look at the grand scheme of what a head coach does, especially a coach like coach Payton, who's had the success he's had."

Two defensive captains also were punished initially. But linebacker Jonathan Vilma and end Will Smith undertook a lengthy legal battle that overturned their suspensions, which otherwise would have sideline Vilma for a year and Smith for four games.

Publicly, Vitt preached that the Saints must avoid the temptation to point to the bounty probe when things went wrong. Yet Vitt had a different take when he appeared earlier this month as a witness at a closed hearing for the players' appeals of their punishment.

Speaking before former Commissioner Paul Tagliabue, who was appointed to oversee the hearings, Vitt made it clear he felt the NFL had undermined the competitive integrity of the league with harsh punishments based primarily on the testimony of two fired assistant coaches: former defensive coordinator Gregg Williams and former defensive assistant Mike Cerullo.

Less than a week after Vitt's testimony, the Saints visited the New York Giants and lost 52-27, falling to 5-8.

New Orleans has since rallied for two straight wins, and can finish the season 8-8 with a victory at home on Sunday over Carolina. But that is far short of expectations for a team that won more regular-season and playoff games combined than any other during the previous three seasons.

"We can reflect much more at the end of the season. I'd rather not even try to go too deep right now," quarterback Drew Brees said this week when asked about the bounty probe's toll. "Were there distractions? Yeah. Was there circumstances swirling around us that were just crazy and we had no idea what to expect, challenges? Yes, most definitely. But I will not allow myself, we will not allow our team, to use that as a crutch or an excuse. Others might say ... 'It affected you guys.' That's fine, but we're not going to go there."

The Saints have long since acknowledged they had a performance pool that offered nominal cash rewards for big plays, including big hits, similar to what numerous other teams have run for generations. However, players and coaches have been adamant that they never ran a bounty program of the nefarious and intentionally injurious nature described by the league, and that they were unjustly singled out and punished.

Saints right tackle Zach Strief said he and teammates were angry about the way the club was treated by the league, but added that players generally have tunnel vision during the season.

"There's a period in the offseason when you can feel that way, and then once the season starts there's no time to worry about it," Strief said.

Strief said the experienced assistant coaches who ran the team in Payton's absence did a good job keeping the routine largely the same and delivering messages in meetings similar to the way Payton had in the past.

"I don't ever remember going on the field and saying, 'That meeting on Wednesday really has me shaken up.' So I don't think there's necessarily an effect like that," Strief said. "But obviously there's a reason (Payton is) a head football coach in the NFL, because he's a talented coach, and so it's not just players that lose something from him not being here. He's also an integral part of our coaching staff and they didn't have him. So you're putting those coaches in situations they've never been in.

"It's more work and more pressure and stress on everybody. Coach Payton carries this big weight, and when he leaves it has to get picked up by a lot of people. You can't deny there's not an effect, but to sit there and say, 'How many wins does that get you?' is impossible."

New Orleans has won seven of 11 games since the 0-4 start, leaving Shanle to wonder whether the impact of Payton's absence did not manifest itself most early in the regular season. The Saints lost all four games by single digits, including an overtime loss at home to a Kansas City team that is now 2-13.

"I think the start of our season would have been different. We would have won one or two games here or there that would have changed everything to where we are now," Shanle said. "We all said it wouldn't affect us, but it was much harder when that reality came. But after we got used to, 'This is how the flow is going to be now,' we played better. We just never played consistently. Our play reflected the roller coaster that was our offseason and our summer."