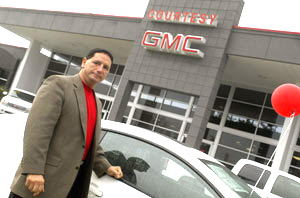 "Pontiac Point" is no more, but the Mann family is staying put in downtown Lafayette. In a rather unusual move, the Manns of Louisiana Motors sold their Pontiac and Buick lines back to parent company General Motors on Dec. 7 so that Don Hargroder's Courtesy Automotive Group could pick them up. The two dealerships have since joined Courtesy's newly renovated Johnston Street GMC operations.

Brothers Ben and Dave Mann, who own Louisiana Motors Inc. along with family members, are now calling their Simcoe Street location LA Motors Headquarters. The site continues to offer used cars, service and parts departments and a body shop. Dave Mann says no jobs have been lost.

Negotiations have been ongoing for a while. The Courtesy takeover was part of GM's "Plan 2000," a product realignment and dealer downsizing strategy to improve profitability in markets like Lafayette by consolidating the lines in better geographic locations and state-of-the-art facilities. When Hargroder and the Manns failed to strike an agreement, GM made the deal happen. "GM kicked in some of the funds to make it possible," the Courtesy owner says.

Hargroder, who's worked in the business since 1979 and owned dealerships since 1982, completed a renovation of the old Service Merchandise building on Johnston Street in May 2005. "When we built the facility, we built with this [Pontiac and Buick] in mind," he says. A new showroom to the right of the existing service department will be constructed soon for the two new lines. Hyundai, Kia and Isuzu on University Avenue are part of Courtesy Automotive Group as well.

Courtesy, which also has dealerships in Morgan City and Abbeville, including GMC, is the top GMC dealer in the state and in November was ranked No. 11 in the country, according to Hargroder. From its Johnston Street site alone, in 2005 the local dealership moved more than 1,260 new trucks and SUVs totaling about $41.5 million.

The Mann family, which also has the local Saturn franchise on Ambassador Caffery Parkway, is undertaking an expansion of its own. In November the Manns purchased J.P. Thibodeaux's Cadillac, GMC and Lincoln Mercury brands on Admiral Doyle Drive in New Iberia and took over that dealership's body shop and used car operations three miles south of Le Triomphe on Hwy. 90, where they plan to eventually construct a facility to house their New Iberia dealerships ("Mann Boys Head South," Nov. 2).

Bernard says about half the space is on the market; the remaining portion of the upstairs is devoted to suites and offices. "I'm looking for either a restaurant or an upscale spa that may offer hors d'oeuvres," says Bernard, noting that a spa could require some of the additional upstairs space.

A potential restaurant would have trouble securing a liquor license, because of the site's proximity to Ascension Episcopal Church and Ascension Day School. A Lafayette Consolidated Government ordinance makes it illegal for a business in the city limits of Lafayette to serve alcohol within 175 feet of a church's property and 300 feet of a school.

When Hurricane Katrina displaced Amy Chappuis and her husband from New Orleans, they decided to call Lafayette home. Her husband, a nurse anesthetist, landed a job at Lafayette General, and Amy ' who was managing the clothing store Lazybug on Royal Street ' has opened Little Town, a boutique offering one-of-a-kind trends in women's clothing and accessories.

Located in the Oil Center Gardens next to Tenzie & Co., the shop is actually an expansion of the 35-year-old family business. "We are from a 'little town' in north Louisiana, Tallulah," says Amy's mom, Mary Jane Johnson. Mary Jane set up the original shop in front of her husband Syd's downtown pharmacy, a business he sold a year ago. Though they are still operating the retail store there, the Johnsons are also considering relocating to Lafayette, where they have relatives.

Little Town is already familiar to Lafayette shoppers, as it's been coming to town since the Junior League of Lafayette launched its Tinsel and Treasures Holiday Market 12 years ago. New merchandise arrives every week, and Mary Jane says customers are surprised at Little Town's unique selection, but mostly impressed by the price points. "People are not in 10 minutes before they say, 'Your prices are wonderful.' Everything is very different. I shop all over the country ' that's what I do," she says. "I have lines right now that no one else has. That's just kind of been my calling card."