While people are busy hitting the gym, we know you fashionistas are making resolutions of great importance of the sartorial variety. And so, we called on the folks who truly know what we'll be wearing in 2013 (they're stocking their shelves now so get amped.)

Let's talk color first. Yep. We're still talking color. And no end in sight. Bright, vibrant color. Neon even. (Before you girl's of the pale skin variety stop reading, the new neon sounds a bit more friendly than the Miami beach-esque pieces we've been seeing that only seems to work on the tannest of them all.)

"Not as 80s as we've already seen, much richer," says Muffy LeBlanc of Hemline. 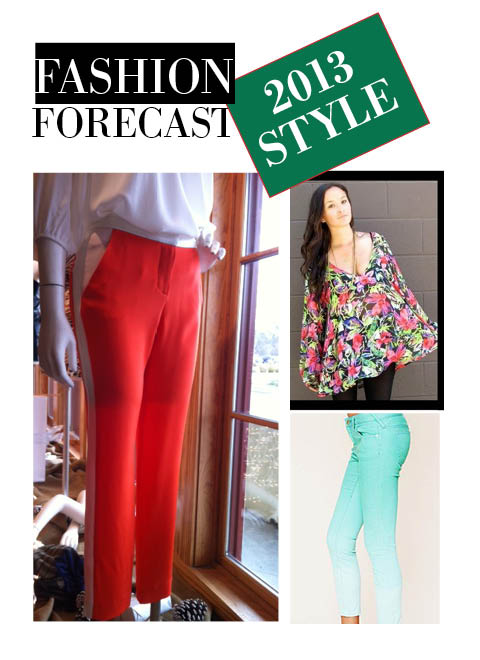 Over at Vanessa V., the VV herself says there are two colors we can expect to rock 2013 - green and watermelon(ish).

"It's emerald or jade green and a pinkish coral like watermelon," Vanessa says.

Alicia Abdalla of Brother's says no matter the color, ombre is going to be super hot.

"My favorite is ombre washed colored denim," she says. "The look instantly transforms a simple top and wedges and is so cheery and playful."

Bold black and white stripes will make an appearance, according to Muffy, who also notes tuxedo pants will be hot. (Like the ones pictured by Parker.)

And Vanessa V. is expecting floral prints to be popular along with colored bottoms like the bright denim we've been loving for months.