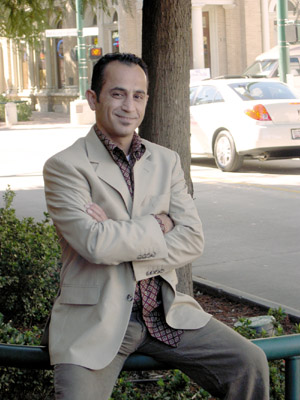 Nidal Balbeisi of Zeus success is taking over the former Popeye's Chicken & Biscuits location at 4100 Johnston St. to launch the prototype for a potential fast-food franchise of his Greek and Lebanese eatery. Over the next couple of months, the location will be converted into a Zeus Express with 10-13 tables ' its emphasis on drive-thru business. "This is hopefully my dream," Balbeisi says. "That will be my first step toward franchising."

The local businessman, who more than four years ago converted an existing Pinhook Road restaurant into his first Zeus, will have five Zeus locations when Johnston Street opens. About a month ago, he opened Zeus Express, a limited-menu takeout concept in the Shell station at Verot School and Pinhook roads that caters to blue-collar workers. "We are doing 10 times better than anything I anticipated," Balbeisi says, noting that the convenience store location is already generating 85 to 90 percent of the revenues he takes in from the much bigger Zeus Café on Jefferson Street.

Next to his Jefferson Street restaurant, Balbeisi is opening Trynd, an upscale Italian-American eatery. But before that, he is launching a Mexican concept called Agave (named for the plant used to make tequila) across from Stan's at the corner of Polk and Vermilion streets. He is in the process of finalizing the hiring of two executive chefs to run those restaurants.

In preparation for the launch of Zeus Express on Johnston Street, Balbeisi says he hired a dietitian to analyze his menu and was pleased with the results. He maintains that the chicken shawerma sandwich, even if it's served with white pita bread, is lower in cholesterol and fat than a comparable chicken sandwich at Subway.

Covington-based WOW Café & Wingery is building a 5,000-square-foot store in the former Luther's Barbeque location on Bertrand Drive and another in River Ranch next to the new CC's Coffeehouse on Camellia Boulevard (which is now open).

Jason Chouest is the franchisee for the Bertrand store, which will be the biggest in the state, with Kevin Poirrier of Youngsville owning the 2,600-square-foot River Ranch location. Chouest, who left his human resources job at North American Shipbuilding in Larose to start this venture, is moving to Lafayette. He plans to also open stores in Broussard and Lake Charles, with Bertrand Drive the headquarters for his operations.

The fast-growing chain offers an extensive New Orleans and Southwest-inspired menu with items ranging from burgers and fried catfish to quesadillas, fajitas, red beans and rice and 14 flavors of chicken wings. "It's one of the most versatile menus I've ever seen," Chouest says. "I liked it so much I wanted to own one." The restaurant also has signature drinks like the WOW Hurricane or The Chalmation, named for a Chalmette native who is one of the company's franchisees. The Chalmation is a fruity beverage filled with Smirnoff Vodka, Captain Morgan's Parrot Bay Coconut Flavored Rum, pineapple juice, orange juice, and grenadine.

Started in 2001 by brothers Paul, Steven and Scott Ballard as a family restaurant, the chain has 35 locations, roughly half in the New Orleans area. "WOW is standing-room-only during Saints games," Chouest says. "The Ballard brothers created a place they would want to hang out in."

Both Lafayette stores should be open by early summer.

A little bit more of old Mexico in Lafayette

Lafayette diners longing for posole but unable to find room to swing a spoon in the tiny dining room at El Ranchito can put their cravings to rest. The authentic Mexican market and restaurant jumped a few blocks east on Cameron Street to a much larger location that can seat about 30 people. The food is just as deliciously home made with daily specials like beef in chipotle sauce, stuffed poblano peppers and pork ribs in green salsa. Tacos, enchiladas, quesadillas, burritos and mole are offered every day; most more-than-you-can-eat plates top out at $5. The soft drinks are imported from Mexico, including Coca-Cola made with pure cane sugar, and it's certainly a great place to hone your rusty Spanish. El Ranchito's new address is 2415 Cameron St.