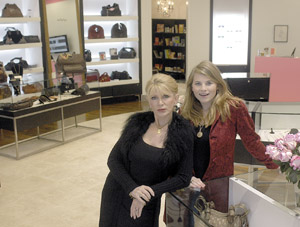 The launch of kiki in The Market at River Ranch along with a host of new tenants opening in coming months will leave the Kaliste Saloom Road center with only a single space to lease, according to River Ranch developer Robert Daigle.

On Sunday ad-exec-turned-retailer Kiki Frayard celebrated the opening of her high-end accessories and gift store ' actually a relocation and expansion from its former home in the Oil Center boutique Molli. Frayard, vice president/creative director at Graham Group, was joined in the retail venture by her daughter Kate (a Tulane grad) about a year ago. The mother-daughter team is heading up buying for the chic store, where most lines are exclusive to Lafayette ' a strategy Frayard believes is key to expanding the role of independent shop owners in this competitive retail market. "Our ultimate goal is to have all of our lines exclusive to our store," she says.

Isabella Fiore, Kooba, Lauren Merkin, Carlos Falchi, Lockheart and Tylie handbags are available only at kiki, as are jewelry lines Lee Brevard, Alexis Bittar, Rebecca Norman, Judith Jack and Elizabeth Showers. "We're exclusive with all of our fragrance lines, Creed, Bond No. 9, Diptyque and Miller-Harris," adds Frayard, noting her buys are also geared toward variety in price points. "We want to work with designers who understand what we're trying to offer in this market." Frayard's high-tech display techniques, creative lighting and extensive jewelry showcasing create a shopping experience unique to Lafayette's retail landscape. Also, Internet buyers can window shop (or purchase) at www.shopkikionline.com.

Frayard's store and its next door neighbor Bonefish Grill were the first tenants in The Market at River Ranch, located between River Ranch and Camellia boulevards, and this week century-old national retailer Jos. A. Bank men's store joins the lineup in a 10,000-square-foot freestanding building that on Dec. 7 will also house women's national clothing retailer Ann Taylor Loft. Jos. A. Bank has more than 350 stores nationwide, offering men's tailored and casual clothing, footwear and accessories.

Daigle hopes The Backpacker, a Baton Rouge-based outdoor and wilderness retailer, will soon begin construction on its 8,000-square-foot freestanding store between Bonefish and the planned CC's Coffeehouse (which will have a drive-thru). In business since 1974, The Backpacker carries a range of travel and outdoor needs, is an official Boy Scout and Girl Scout supply distributor, an Orvis dealer and home to The C.C. Lockwood Gallery. The store will have an entrance off Kaliste Saloom Road and Rue Promenade, the newly-constructed road behind Bonefish and kiki.

Furniture store W. House and Home, an independent retailer based in Slidell, joins the strip portion of the center in late March. The company sells both traditional and contemporary furnishings and will be housed in 2,400 square feet, taking two spaces next to kiki.

Locating on the opposite end of the strip near River Ranch Boulevard is Soho, a new ultra salon created from the merger of Salon Chakra on Ambassador Caffery and Salon Orleans in downtown Lafayette and designed by a Chicago-based interior design firm. The salon is tentatively scheduled to open in March.

If current lease negotiations come to fruition, only a single space will remain, Daigle says. "The rest of the letters of intent are floating back and forth between a national rug company and a [regional] women's retailer."

Creating a separate phase of mixed-use development, Rue Promenade will soon have its first restaurant. Another Broken Egg Café will back up to Bonefish alongside five retail spaces that are below apartment units (split level apartments with a living space and bedroom on the lower floor and a master bed and bath in the loft) lining the street. Across the street is a 238-unit complex, which includes condos for sale on the fourth floor, Mainstreet Apartments on the second and third floors, and live-work and commercial/retail spaces on the bottom level. That development's first retail tenant will be The Wine Loft, a New Orleans-based wine lounge.