Acadiana Food Circle promotes locally sourced food and helps ensure what we consume in restaurants lives up to its billing.

City Farm's pattypan squash ready for the farmer's market this past spring.

Acadiana Food Circle promotes locally sourced food and helps ensure what we consume in restaurants lives up to its billing.

The slow food movement has universal appeal, whether a consumer's interests are culture, economics, sustainability, health or just the best tasting food they can find.

Acadiana Food Circle is working to promote those interests and more for local consumers, restaurateurs, farmers and future generations. Its mission is to connect local consumers with local producers and to educate the public on healthy, local food choices, and that the benefits of eating local are innumerable.

"People think that if they're eating local, it's intimidating and it's expensive - but it's not, you just have to know the source, which is what Acadiana Food Circle does," says Tyler Thigpen, AFC president. AFC puts together a directory, which is chock full of local producers, artisans and restaurants who use local foods. "It takes you directly to the source. It tells you farmers' markets, CSAs [community-supported agriculture], farmers and where they sell and at least one way to contact them. We verify farm-to-table restaurants that they're buying regularly from two farmers. We do a certification system that gives us a lot of validity with the producers because so many people say they're local, but they're not local - they have a local distributor. We try to make sure people who are saying they're local are and we include them in the directory and put a sticker on the door." 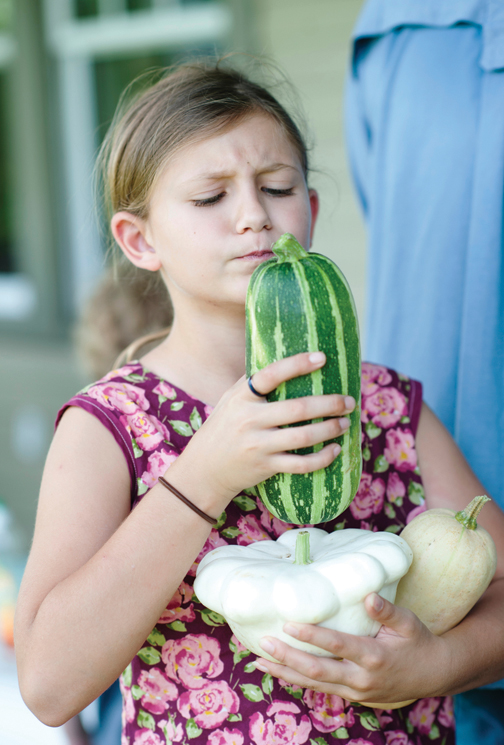 Madeleine Hernandez inspects a zucchini freshly picked on her family's farm in Lafayette.

amount of transportation or modification to the food.

"If you look at the whole picture, it doesn't cost more," says Sal Lopinto, outreach coordinator for AFC and a kale enthusiast. "A lot of these factory farms are subsidized by taxpayers and they're getting millions of dollars pumped in to produce genetically modified corn that's fed to these animals, and this awful food makes people sick - look at Joel Salatin, who said, If you think the price of organic food is expensive, have you priced cancer lately?'"

"Part of the slow food movement, a component of it is sustainability," says Mark Hernandez, co-owner of Mark & Mary's City Farm. "It's a healthier way to do things; economically it's a better plan, so the one thing I think the big challenge is being able to provide enough to support demand. With only a handful of growers, demand is going to exceed what we can supply."

Traditionally grown food takes substantially longer to grow, mainly because conventional farms use synthetic fertilizers to produce more food faster. However, the care that goes into each plant on a local farm results in superior taste and higher nutrition value.

"Tomatoes, for example, if they're being trucked across the country, they're picked green so the nutrient hasn't fully developed," continues Hernandez, "whereas when you buy local they're normally picked ripe so the nutrient level is higher."

"People always think about portion control, and with better quality and better taste, portions just naturally are controlled," says Daphne Olivier, the health and nutrition outreach coordinator for AFC. "Your body isn't craving nutrients that aren't there. The food flavor is going to taste so different whenever it's been picked that day. It's going to be totally different from something that's been genetically modified. And part of the mindless eating that has become habit for so many people is because of food flavor, and a lot of the foods we're eating have no flavor, so your body craves more and more. The nutrient and microorganisms that are found in locally grown foods are going to better populate your gut, which will allow for better absorption and decreased inflammation."

"It doesn't matter if you're a tree-hugger or a health fanatic or fiscally conservative," says Thigpen. "It keeps money in the community, so if you care about finances, that's huge. If you care about health, a lot of our producers are pesticide-free, and it's local and sustainable. If you care about the environment, the carbon footprint does not exist. We're not getting Listeria outbreaks from grapefruit from Australia because it's not being trucked across the country and handled by God knows how many people. There are so many different reasons why local is appealing, and it doesn't have to be yuppy or hippy or hipster or whatever people like to call it."

Find the AFC directory at acadianafoodcircle.org.