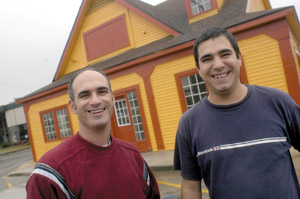 The former Burger Tyme building on Bertrand Drive that's been vacant for years will house Café Habana City early next year. Rafael Garcia, who launched the Cuban restaurant on Verot School Road with his family four years ago, says the new restaurant will be double the size of his existing 1,200-square-foot location. "We could dance in the kitchen; the kitchen is huge," Garcia says. The Bertrand location, which he hopes to open in February, will also have a mojito bar that is significantly bigger than the mini bar that doubles as the restaurant counter at the original eatery.

Garcia is not sure whether he'll shutter the smaller location, saying the decision rests on his ability to hire and retain workers. That restaurant, located in a strip center near Verot's intersection with Ambassador Caffery Parkway, has a loyal following of patrons looking for authentic Cuban food at moderate prices. The No. 1 seller is the Cuban sandwich ' roast pork, ham, Swiss cheese, pickles and mustard. Other popular items include the citrus chicken, shredded beef cooked in Spanish sauce with bell peppers and onions, and the marinated grilled pork with mojo sauce.

Café Habana City is owned and operated by Garcia and his family, with the cooking expertise coming from his mother and wife. His cousin and partner Yoanis Suarez and his wife also work at the restaurant. The family fled Havana in 1998 after speaking out against Fidel Castro ' and were brought here as political refugees through the efforts of the Diocese of Lafayette.

"The business, it's a family," Garcia says. "Everybody's here."

Joe Broussard left River Oaks Catering in mid-December after serving as general manager for more than four years. "That place is doing extremely well," he says of River Oaks. "I was hired to make it work." Now the well-known caterer has been snagged by the City Club at River Ranch.

In his new position, Broussard says he will work closely with City Club General Manager Morty Valldejuli to "re-establish some of the luster of City Club."

Broussard joins River Ranch as banquet manager Jan. 1, but he'll be taking time off in early February for Washington Mardi Gras, which his father Felix, a Carencro native, founded in 1944.

Joe, who took over the elaborate political festival in 1976, serves as senior lieutenant and helps run the entire three-day event. "We all do this as a group. We kind of work together on everything," he says.

Washington Mardi Gras will be held Feb. 8-10, marking the 59th ball and golden anniversary of the Mystick Crew of Louisianians. In 1981, the krewe was incorporated as a non-profit organization and continues as the official sponsor of the ball, a self-sustaining event with costs covered by ticket sales, corporate donations and krewe memberships. The glitzy networking celebration, held annually at the Hilton Washington, includes bands and chefs from throughout Louisiana.

Broussard came to Lafayette from Washington, D.C., in 1978, then a stockbroker wanting to start a catering company. "It was an avocation. I cooked all the time," Broussard says. He was the Cajundome's original caterer, a position he held from 1986 to 2002.

Normandy Square, a small shopping center that will be anchored by Lafayette's third Raising Cane's restaurant, is planned for the intersection of W. Pinhook and E. Kaliste Saloom roads. The center is a project of RPI Group Inc., a new full-service real estate development and project management firm headed by Harold Lambert.

Lambert, who worked for Prudential Saturn Realtors for nine years, says Normandy Square will also have a 22,400-square-foot strip center. Construction on Cane's is scheduled to start in mid-January and should take about three months to complete. Baton Rouge-based Raising Cane's has restaurants on Congress Street and in the Super Target center on Kaliste Saloom Road. It also recently opened a New Iberia location on Admiral Doyle Drive in front of Wal-Mart.

Lambert hopes Cane's presence will fuel leasing at the center. "We should start site work on the shopping center by the end of February," he says.

Just across Kaliste Saloom next to Best Suites, RPI plans to construct an office park on 6.5 acres of land. The company is selling parcels on 4.5 acres and is reserving the back acreage for an office condo project. RPI also has an ongoing office development, Dover Park, located near the Holiday Inn Express and Chili's on Ambassador Caffery Parkway.

A Baton Rouge native, Lambert moved to Lafayette in 1972 and entered the real estate profession as a sales agent. He later became a broker, appraiser and developer. He is vice president and chief operating officer of RPI Group, www.rpigroupllc.com, and his brother Kenneth, who lives in Orange Beach and works in Africa, is an investor in the firm. Kenneth serves as president and chief executive officer.