Rudy Giuliani is pro-choice, pro-gay rights and pro-gun control. Why are Louisiana conservatives Charles Boustany and David Vitter endorsing him for president, and will the state's GOP base stand for it? 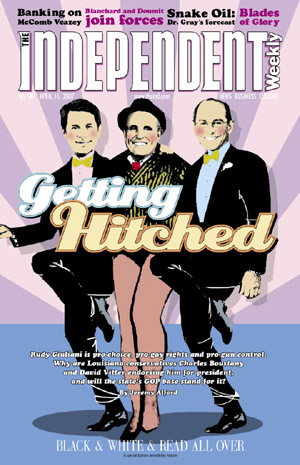 Rudy Giuliani is the tough guy who took on a surprise terrorist attack and guided New York City through the trauma and chaos of 9/11. He faced off against the mob in the Big Apple as U.S. attorney, eventually imprisoning three of the city's four major bosses. As mayor, Giuliani found a way to boot all the smut merchants from Times Square and slash the crime rate. He's Eliot Ness reincarnated, John Wayne with a Noo Yawk accent. It's no wonder the Republican Party has taken a shine to him as one of the presumed GOP nominees for president. What's not to like?

For conservatives, plenty, which is why hard-liners are questioning Giuliani's ambitions. He's sideways on key traditional Republican issues ' abortion, gay rights and gun control ' and certainly doesn't fit into the evangelical formula that President Bush and political consultant Karl Rove have used so relentlessly over the past eight years. Despite those obstacles, Giuliani is leading 34 percent to 18 percent over nearest Republican challenger John McCain in the latest CNN poll.

In Louisiana, two of the state's top conservative voices ' U.S. Rep. Charles Boustany of Lafayette and U.S. Sen. David Vitter of Metairie ' have officially endorsed Giuliani, with caveats that they support the man but not necessarily his message. And a lot of Cajun Catholics in the southern part of the state and fundamentalists farther north aren't happy with the Republican duo. Why would Boustany and Vitter, Giuliani's campaign chairman for the southern states, take such a leap? They'd better hope the payoff is worth the gamble, as they wage their reputations on a Big Apple Republican maverick.

During the past two federal election cycles, Louisiana's GOP congressional delegation has been a one-horse bunch. They were all loyal to George Bush, backing the president wholeheartedly and without fear. This year it's a different story and a completely different race. There is no vice president in the competition, no real heir apparent and not a Bush family member in sight. Congressmen Jim McCrery of Shreveport and Rodney Alexander of Quitman have endorsed former Massachusetts Gov. Mitt Romney, the Mormon who recently cleared $23 million in the latest election cycle compared to Giuliani's $15 million. Richard Baker of Baton Rouge isn't betting the ponies yet and Bobby Jindal of Kenner, a leading candidate for governor, may stay away from the track altogether.

The fact that pols are already lining up behind candidates a year from Louisiana's primary and 19 months before the election isn't unusual given the political climate. The media is swallowing whole the feeding frenzy surrounding early endorsements, prompting many lawmakers to hitch their wagons early. There's also the potential windfall from getting in early and securing a spot at the table during policy development. Still, it's a risky gambit, especially if a campaign disintegrates or starts to flounder.

Boustany and Vitter are now at the mercy of that double-edged sword. There's still a developing field of Republican candidates grabbing headlines, and one of the frontrunners will surely be gone by year's end ' just around the time regret becomes the name of the game for those who endorsed too early. There are all kinds of players to watch: War hero, struggling candidate and U.S. Sen. John McCain; Hollywood actor and former Sen. Fred Thompson; Sen. Sam Brownback; Gov. Mike Huckabee; and Congressmen Ron Paul and Tom Tancredo. None of them face the challenges on social issues that Giuliani does in the South.

The lack of a strong Southern voice currently in the field may be one of the factors behind the pairing of Giuliani with Boustany and Vitter, says Jason Hebert, a political consultant who managed and helped win the Louisiana and Colorado campaigns for President Bush in 2004. While the choice is 180 degrees counter to the Louisiana legislators' social platforms, it's indicative of Giuliani's strength at this given moment. "I'm sure they had their inside reasons, but right now it's really all about who can win," Hebert says. "Giuliani will be a serious contender in the final race, has a great fund-raising base and looks amazing in all the polls. There's just no obvious choice, and you're seeing the residual of that."

Giuliani's poll numbers have been absurdly high against a packed GOP field, winning practically every survey and poll to date and leading his competitors by as much as 12 points. But it won't be much longer until he comes under intense scrutiny by the media and primary voters in Iowa and South Carolina ' and eventually Louisiana.

While the Giuliani camp could have repackaged its candidate for easier conservative consumption, it chose to offer him up raw. What you see is what you get, and America's Mayor isn't shying away from his previous stances, says Elliott Bundy, Giuliani's press secretary for the Southern states. Even on the dividing issue of abortion, Giuliani is sticking to his stance.

Just last week, he confirmed in a CNN interview that he supports public funding for abortions. "He is personally opposed to abortion, but ultimately believes a choice should exist," Bundy says.

Giuliani's entire issues sheet is kryptonite for diehard conservatives and contrasts greatly with the values touted by Boustany and Vitter. While serving New York, Giuliani spoke in favor of trigger locks, firearm training and a ban on some assault weapons. But lately, he's been deferring most questions on the subject to "states' rights" and voicing support for the Second Amendment. While opposed to gay marriage, he supports domestic partnerships that "provide stability for committed partners in important legal and personal matters," according to his Web site. "[Giuliani] wants to be sure there's an agreement where people can't be discriminated against," Bundy says.

And now that he's a presidential candidate, Giuliani's private life is out there flapping in the wind. He has been married three times; the first was with his second cousin once removed. A 1997 Vanity Fair investigative story claimed Giuliani had a relationship with his communications director in the mayor's office. He also grabbed headlines for issuing a press release about his separation from second wife Donna Hanover before informing her. Before his divorce from Hanover was final, Giuliani paraded with his mistress Judith Nathan in the St. Patrick's Day parade. Nathan ' his current wife ' has also been married three times.

Additionally, Giuliani's fending off minor but nonetheless irritating questions about cross-dressing at a New York media roast. It's enough of a distraction that New Republic magazine published one of the photos of Giuliani in rouge lipstick and a blonde wig with the headline, "But Will it Play in Peoria?"

When Giuliani's dirty laundry starts getting a fresh airing below the Mason-Dixon line, voters probably won't like what they see ' and that negativity could rub off on Boustany and Vitter, says Florida pollster and political consultant Jim Kitchens. "I personally think they are making an early, tactical and strategic political error on both of their parts," Kitchens says. "Giuliani has been gaining support, but what's interesting is there are still a lot of people that don't know the details about him. His social issues are not going to play well in the Deep South."

The conservative base in Louisiana will not budge on the issues, says Rev. Gene Mills, executive director of Louisiana Family Forum, an epicenter for Christian public policy work. "I'm disappointed and outraged," Mills says. "Boustany and Vitter ran on a pro-life platform with traditional values and built a constituency based on those beliefs. Rudy hasn't stood on those platforms," he says. "[The endorsement] was premature and ill-advised. The whole race could implode at any time."

So what's in it for them? For starters, they would have a close relationship with a Giuliani White House, and there could be leadership roles in Congress or the Senate. There are cabinet positions, ambassadorships, party gigs ... the list goes on.

Vitter stands to gain the most. While it sounds a bit lofty, there's increased chatter that he'd be a possible vice presidential candidate on a Giuliani ticket. "I don't think it's completely ridiculous to consider that," Kitchens says. "You have a Northern mayor who has municipal experience, so you need a balance from someone who has been in Washington, is from the South and could offer solid conservative credentials."

Hebert doesn't think Louisiana voters are going to revolt against Giuliani. The former mayor has some compelling stories to tell, including defeating prostate cancer and staring down 9/11. Louisiana, of all states, should appreciate strong leadership in a time of crisis. So is it possible that Giuliani's abortion, gun control and gay rights stances could be swept under the rug? "You have to keep an eye on the polls," Hebert says. "Other than Iraq, what other issues are voters going to be sticklers about? What is going to be the driving force behind voters' choices this year?"

Vitter and Boustany declined interview requests from The Independent Weekly regarding their endorsements, meetings with Giuliani or possible leadership roles. They also declined to answer whether Giuliani would champion any specific Louisiana issues such as coastal restoration, oil and gas and commercial fishing. The offices of both men have been bombarded with e-mails and phone calls from constituents, and Boustany and Vitter are facing pointed questions on their Giuliani endorsement during public gatherings.

Mills, who says he had personal conversations with Boustany and Vitter about their decisions, says neither indicated that the Giuliani campaign would back down or tone down on social issues. However, they did convey that Giuliani would appoint "strict" judges ' the only ace he has with the evangelicals ' and he would be strong on the war on terror. "As far as policy, that's inadequate," Mills says.

Vitter recently said, "Rudy has stated clearly to me and to the world that he'll appoint strict constructionist judges who will apply the law as written and not legislate from the bench."

In his own press release, Boustany made sure to point out the "most important issues" that Giuliani will be campaigning on: "As a Republican and a conservative, I know Rudy Giuliani is the best choice to be the next president. On the most important issues of ensuring our national security and protecting our families, keeping taxes low and making government more efficient, Mayor Giuliani's record speaks for itself and his leadership is exactly what we need in the White House."

Politically, it could be a major coup for Vitter and Boustany if Giuliani survives the primaries and earns the Republican nomination. It's all about survival right now, says Washington, D.C., political consultant Brent Littlefield. "They see Rudy being staged to win, and they want their involvement to be prominent so they get in early," he says. "There was some aggressive recruiting going on, and we probably haven't seen the last of it."

On the flip side, their experiment of mixing ideologies could prove disastrous, especially as voters continue to be polarized, and many elections are now being decided by only a few percentage points. The elephant is known for its storied memory, but in the case of Vitter and Boustany, they better hope Louisiana Republicans have a hard time recalling this election cycle if the Rudy train derails. "There are social conservatives that will never forget this," Mills says.