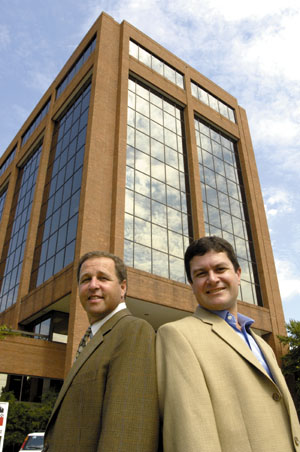 The 136,000-square-foot Versailles Centre, an office building that houses such tenants as Preis, Kraft & Roy law firm, MidSouth Bank, and Jennifer Palmer & Co., is in the midst of a renovation project that will elevate it from Class B office space to Class A, the city's premier office space classification, says Mike Matherne of Champion Real Estate Services. Champion took over management of the downtown structure for owner S&A Properties II Inc. of Baton Rouge in early July.

Aesthetically, the 24-year-old building's architectural style has withstood the test of time; however, its interior is outdated and deteriorating, and its mechanical, heating and air conditioning systems are in need of aggressive maintenance. The late Herbert Heymann developed the office building for about $8.5 million, says architect Jim Ziler, who was part of the original architectural team on the project and is heading up the renovation.

Because of Versailles Centre's access and location, its rise to Class A status should enable it to attract quality tenants at competitive rates. Located across from Cathedral Carmel School, Versailles Centre has about 40,000 square feet available for lease, most left vacant when the Onebane Law Firm relocated to River Ranch. The space is available for $12-$13 per square foot.

Some exterior improvements were already under way when Champion took over from Property Management Plus of Lafayette, and interior work ' which includes enhancements to the common areas and bathrooms ' should begin within a month. Matherne is handling marketing and leasing, and Di Anne Hoffman, a partner with Glen Richard in Champion Real Estate, is overseeing construction and day-to-day management.

Matherne says construction estimates have not been finalized. "The funds are available to bring the building up to its former stature," he maintains. "I believe it will be one of the top five commercial buildings in all of Lafayette."

Champion also is in the process of redeveloping Pinhook Plaza shopping center, located near the intersection of Pinhook and Kaliste Saloom roads, into a lifestyle center.

Jemma Vidrine and Rachael Barrett have ventured into the jean business with the opening of Denim Hardwear in the Shops at the Crescent in River Ranch.

Located next to Blockbuster, the 2,000-square-foot store offers more than 40 different styles from 22 jean makers for women and 14 for men, including some designer brands new to the local market. "I have more lines that Lafayette hasn't seen yet than are in stores here now," says Vidrine, the former women's buyer at F. Camalo in the Oil Center.

The 29-year-old, who got her retail start at Eros on Kaliste Saloom Road, says the store fits jean wearers age 15 to 55 with price points ranging from $64 for junior styles from makers like LTB to $240 for the Italian line Duarte. "Lafayette has a small selection of denim, especially for men," Vidrine says.

Located at 111 Auditorium Place in the Oil Center, the facility originally housed the private Lafayette Townhouse Club but had been vacant for years. LeBlanc purchased the site and early this year began an extensive renovation, converting the outside swimming pool into a garden terrace, reconfiguring the restaurant to seat 125 guests, and updating the ballrooms. What was tennis courts has been lined with jasmine and filled with grass for family reunions or company picnics.

LeBlanc's company, Quintess Catering, will also operate out of the new facility.

LeBlanc paid Crowley businessmen David and Peter John $1.25 million for the 2.5-acre site, according to the Clerk of Court's office. The John brothers had purchased the property from a prominent Lafayette group ' Charles Chatelain, Tom Galloway, Wayne Elmore and Dr. Paul Azar Jr. ' for $1.03 million in October 2002. Court records show that in 2000, that group paid $850,000 when it purchased the site from Lafayette Townhouse.