I'll start with this simple disclaimer: I'm not from around these parts. It is for this reason perhaps Mardi Gras is still such a marvel to me. You see, where I come from (Arkansas to be more exact) Mardi Gras is an abstract idea that's celebrated on Fat Tuesday night at a bar. There is no pageantry and often little or no understanding of the significance or cultural impact of what is an entire season around these parts.

And so despite the dreary drizzly night that was Saturday, once inside the Cajundome Convention Center, the glorious madness of Mardi Gras overshadowed everything else. The feathers, the fluttering confetti, and the style ahhh, the style. There were truly too many fantastic dresses to give each their proper due. (Don't miss our album on Facebook for full coverage.) 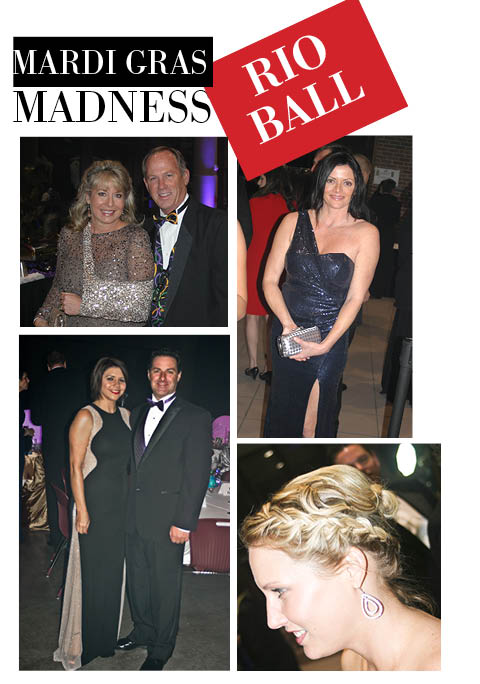 Instead I'll give a nod to my favorite of the night, which was the first I spotted. Kim Royer in a black long dress with illusion sheer sides sprinkled with gems. With a theme like Third Rock from the Sun, there was something akin to the marriage of both rock and roll and futuristic sleek sexy that happened in this one dress. Kim kept her hair simple and added red lips. Any other styling would have totally missed the mark. She nailed it proving that sleek is absolutely sexy.

We also love a good one shoulder dress. Nearly universally flattering, especially when combined with a sweetheart neckline I was loving this navy (the new black, they say) sequin dress on Katina Crabtree. Sexy without too much skin. Just what I'm wanting this Mardi Gras season.

In the way of beauty we saw a lot of this gal's fav - the top knot. But, it was Amanda LeRoy's elaborate 'do that caught our eye. Paired with a feminine pink dress, Amanda was on trend and beautiful with a touch of braids.

The highlight of the night, however, had to be the fearless Karen Chalmers. When I caught of glimpse of her one phrase came to mind: "the show must go on." WIth a broken shoulder, she was lovely in a taupe shimmering dress and in true stylish form created a matching sling cover. No way was she going to let a broken bone and contrasting black sling ruin her night. Style on, sister.

Rio is the first big ball of the season. Frankly, if this is any indication of the style we can see this season, the red carpet has nothing on Lafayette. (And I'll need a few more memory cards for my camera.)

Don't forget, we'll be picking the most interesting, fabulous looks throughout the season. The madness has begun.