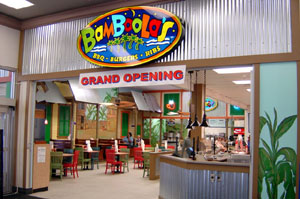 The new location, however, will be doing business as Bamboola's; the first store opened in the Harahan Wal-Mart in mid-May. VooDoo President Bill Strobel says the date for Bamboola's expansion into Lafayette is not firm, though he expects to open in early September. "We're just going into one [Lafayette Wal-Mart]," Strobel says. By late September, however, a Bamboola's should be open in the Opelousas Wal-Mart Supercenter.

"Bamboola's was designed with the Wal-Mart customer, the Wal-Mart strategy in mind," Strobel adds. Wal-Mart hopes to make its store more upscale by adding better clothing lines to move grocery buyers into the apparel departments, for example, and Bamboola's is part of the "village" concept that's being created. "Part of their strategy is to offer a more exciting food platform," to complement the beauty and nail salons, banks and eyeglass services, he says.

Voted "Best Barbecue" in Gambit Weekly, VooDoo is known for brightly colored décor and walls that are decorated with folk and island art, with reggae and calypso music completing the ambiance. Bamboola's atmosphere is more conducive to its in-store location, but its vibrant colors and staple VooDoo menu items, including the pulled pork sandwiches, St. Louis ribs and "Mojo Baked Beans," clearly indicate it's a spinoff. Strobel says the menu has also been expanded to appeal to families wanting just a burger and fries.

"It's a Caribbean, sort of upbeat fast-casual food service. It's not another quick service restaurant," Strobel says of VooDoo and Bamboola's.

There's one good reason to get sick and be admitted to a local hospital ' CC's coffees. The popular coffeehouse chain opened a kiosk in Our Lady of Lourdes on June 10 and is doing the same in Women's & Children's in early July.

"We have a limited selection of the pastries; however, we have a full lineup of our specialty drinks," including sugar-free and low-fat versions, says Danny Hebert of Carencro, director of CC's Coffeehouse. "It's going very well. It looks like it's going to be a good location for us," he says of the Lourdes outlet. "It's a great amenity for their clients, their customers and also their employees. Patients in the hospital are asking us to provide room service, wanting us to deliver Mochassippis to their room."

CC's first expanded into health care facilities in 2003, when it opened in Our Lady of the Lake in Baton Rouge, where it has two kiosk locations.

Celebrating a decade in business this year, Baton Rouge-based CC's, a brand builder for Community Coffee, will have six Lafayette locations when the Women's satellite opens, and it's not stopping there, says Hebert. "We have some other interest, and it's not just hospitals."

Owner Amy Lewis, who has five years of retail experience, says she's filling a niche on the Beaumont retail scene, which she claims lacks the flair of shops like her store. "There are no shoe boutiques [in Beaumont]," says Lewis, who's been operating in Lafayette for a year.

Lewis' husband, Troy, has family in Beaumont, so she's quite familiar with the area. Located in the new Metropolis Shopping Center at 3195 Dowlen Road, the chic store also offers accessories that include trendy purses, belts and jewelry. At about 1,700 square feet, it's slightly larger than the original Shoe-La-La, located on Camellia Boulevard in River Ranch's Shops at the Crescent.