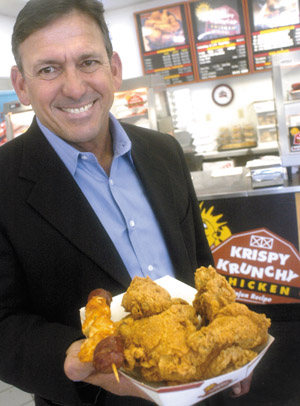 Col. Sanders has his secret fried chicken recipe and so does Lafayette's Neal Onebane.

The owner of multiple Lafayette Pop-N-Go convenience stores in the late 1980s, Onebane was a vendor for another company's fried chicken program at the time, but his entrepreneurial streak convinced him he could do a better job. His experiments with a powder marinade and breading mix soon made his Pop-N-Go chicken a hit with local customers.

In 1993 Onebane founded Krispy Krunchy Foods to distribute his product to other outlets and eventually got out of the convenience store business to pursue the chicken gig full time, divesting of his fifth and last store in 1997. "I dedicated my entire time and energy to developing the Krispy Krunchy concept," he says.

The well-seasoned fried chicken began attracting a wide range of customers seeking authentic Cajun flavors, Onebane says, and today the chicken is offered at more than 400 locations in nine states.

That recent growth spurt has been fueled by Krispy Krunchy Foods' strategy of signing on with marketing partners ' six in the past two years, with more negotiations under way in Utah and Oregon. The marketing partner with the most potential for expanding Onebane's reach is Royal Buying Group of Hinsdale, Ill., because it operates in multiple states. For the past year, RBG has been promoting the Krispy Krunchy Chicken program to convenience stores and stand-alone food-service outlets in Chicago and other markets nationwide.

"Some of our hottest locations are in the Midwest in Chicago and Kansas City," Onebane says. "We've proven that Cajun food concepts in other parts of the country are not just a good idea. They work. Even potential international partners from India, China, Mexico and Dubai have contacted us."

Onebane's company offers its branded image to retailers without the franchise fees, royalties, contract and advertising costs typically associated with traditional franchises. In addition to providing training, menu boards, graphics, signage and financial advice, another Krispy Krunchy entity, National Food Service Equipment and Supply of Jonesville, La., also sells refrigeration and frying equipment to the locations. About eight years ago, Onebane teamed up with Tyson Foods, which processes his chickens. Tyson processes 20,000 pounds at a time using a liquid injection recipe Onebane later developed as a substitute for the powder marinade, and packages them in vacuum sealed bags that are never frozen. The foods are battered at the outlet and fried fresh. The line also includes chicken tenders, jambalaya, boudin bites, and chicken kabobs. Cajun Gulf Seafood, another Krispy Krunchy company, offers similarly seasoned fish and shrimp.

The products are distributed locally by Doerle Foods, which is relocating its main distribution facility from New Iberia to Broussard, and Cisco Foods, based in New Orleans.

While the Krispy Krunchy concept was designed as a food-service profit center for convenience stores, its products are also available in a number of area grocery stores, like Fremin's in New Iberia, and in free-standing restaurants, mall food courts, Blue Bayou Water Park, bowling alleys and truckstops.

Though he would not disclose sales figures, the Lafayette businessman expects the company's sales to grow 50 percent next year. "Our goal in the next five years is to be in half of the states in the country," Onebane says.

The analysis of the company's influence on the Acadiana economy was conducted by UL Lafayette economist Dr. Anthony Greco, who found the total impact of Cox's capital expenditures in 2006 to be $78 million and its ongoing business activities $210 million annually. Greco says Cox's 325 Acadiana area employees and $11 million payroll place it among the city's top 30 employers.

Cox officials tell The Independent Weekly they expect to introduce Zone Channeling by Thanksgiving (in time for bowl season). Zone Channeling will be free to existing digital subscribers, and is a series of small panels on the TV screen that are related to a single theme ' Zone Kids, Zone News and Zone Sports, each appearing on a different digital channel. From a menu to the left of the TV screen, viewers customize the screen to show six different channels (multiple college football games on Saturday, for example) and choose audio for one while keeping an eye on the others. When a game gets exciting or the viewer decides he wants to watch one game for a while, he selects that zone panel to flip to the station.