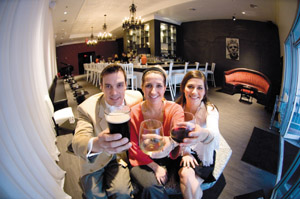 Taking its cue from the upscale bar scene of cities like Manhattan and Chicago, Jefferson Street's piano bar "Lounge." is setting a new standard in downtown Lafayette. Michele Ezell and her husband Sean, along with her sister, Leah Simon, developed the high-tech contemporary concept, the first phase in their planned renovation of the former Club 410 building next to their existing business, Tsunami Sushi.

Three large chandeliers sparkle light onto the massive granite bar; the back of the bar is a large wall of plexiglass with glass shelves for displaying liquors, candles and fresh flowers. Opposite the bar, a lightweight curtain hangs over the entire wall for a softening effect.

The posh bar offers a variety of seating options, each with a unique atmosphere, and has a small antipasto menu. On Thursday and Friday nights from 5 p.m. to 7 p.m., the lounge offers two meats, two cheeses and a couple of glasses of wine for $20. The bar is open 4 p.m. to midnight Thursday and Friday, and 6 p.m. to midnight on Saturday, with a piano player entertaining from 7-10 p.m. nightly.

In February the back doors of the bar will open up to Grand Contemporary Gallery, which was previously housed on Jefferson Street above the nightclub Rain.

The Ezells and Simon are planning to renovate the back of the building, the portion they purchased in mid-2006, into loft condos. The upstairs of the building (once used as storage for Abdalla's) has wood floors and exposed brick walls, ideal features for its conversion to single, open space lofts. The partners lease the space for Lounge.

While they work through the details of that development, the sisters have undertaken another major project ' an overhaul of Tsunami's menu. After six years attracting Lafayette's raw fish aficionados, the menu has taken a turn west, incorporating what executive chef Fred Nonato says ranges "from Asian to Cajian." (His word, not ours.) The chef says he has "way too much talent in my kitchen to waste on just teriyaki dishes." Chicken teriyaki will remain, but look for a petite filet topped with shrimp and crab ginger garlic sauce, the seared Thai tuna topped with crab salad set in a lime chili sauce, grilled salmon, crispy duck and a curry noodle dish. A few new rolls join the lineup as well.

An intimate, candle-lit ambiance will be offered in River Ranch's Main Street development when The Wine Loft opens in mid to late February. The wine bar, owned by franchisee Tim McCoy of Lafayette, will have more than 250 wines by the bottle and upwards of 70 wines by the glass in a large variety of price points. "You can get a glass of wine for $4.50 to $60," McCoy says. The bar will also have a light food menu.

McCoy says The Wine Loft's décor will be upscale, but the emphasis is on comfort. At weekly wine tastings on Wednesdays from 5 to 8 p.m., customers will be able to purchase the featured premium wines by the glass for half price. The lounge is locating behind Bonefish Grill and is part of River Ranch's Main Street development.

McCoy, who has the rights to open additional Wine Lofts in Lafayette Parish, has owned downtown's Jefferson Street Pub for the past four years.

River Ranch's Wine Loft is part of a network of franchise locations originally founded in New Orleans. The New Orleans location closed after Hurricane Katrina, and the group's owner, Doyle Restaurant Group Franchise Co. of Baton Rouge, has locations in Baton Rouge, Birmingham and Dallas is expanding this year into Hunstville and Mobile, Ala.; Boston, Houston and Nashville.

Joel Bacqué and his fiancée, Melanie D'Aquin, are bringing Subway back to downtown Lafayette with a location at 515 Jefferson Street. The sandwich shop will take up about 1,100 square feet of Teche Drugs, which is owned by D'Aquin's mother, Martha Day, and Martha's husband, pharmacist Tom Day.

Bacqué says the location is tentatively scheduled to open in mid-March. This is his and D'Aquin's first Subway, a franchise recognized as the best in the country by Entrepreneur Magazine for the past 15 years.

Subway shuttered its downtown location at 107 E. Main St. several years ago; since that time, the site has housed the restaurant Pat's Downtown.