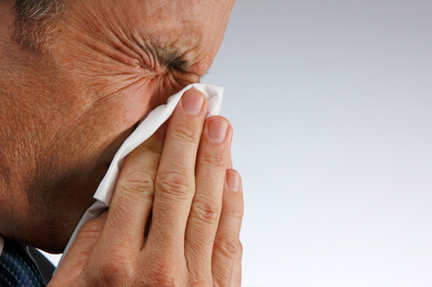 While the outlook for the rest of the season isn't clear, experts are encouraging people to take precautions such as getting a flu shot and making it a practice to wash hands often to prevent the spread of germs.

Both states are among 29 reporting high levels of flu-like illness. Although 18 children nationwide have died from the flu since early October, none was in Mississippi or Louisiana.

State epidemiologists in Louisiana and Mississippi say emergency rooms have not reported turning away patients because of high numbers of the flu, as has happened at Chicago-area hospitals.

"This is going to be one of the very busy seasons," said Louisiana's state epidemiologist, Dr. Raoult Ratard.

Mississippi doctors and emergency rooms reported an average of more than 13 patients out of every 100 with flu-like illnesses last week, said state epidemiologist Thomas Dobbs. Outside of flu season, he said, the average is about 5 in 100 for those 46 "sentinel sites" - doctors' offices, emergency rooms and urgent care centers that make weekly reports.

Louisiana's most recent weekly report, for the last week in December, showed 275 or more positive flu tests every week in December from the 60 to 70 sentinel sites, and about 9 percent of all patients showing flu-like symptoms.

Nationwide, the proportion of outpatient visits for influenza-like illness that week was 5.6 percent compared to the national baseline of 2.2 percent, according to the Centers for Disease Control and Prevention.

In both states, as nationwide, the most frequently identified strain of flu is one of the three covered by this year's vaccine.

"The most prevalent strain going around matches the vaccine very well," Ratard said.

Some people will get ill even after getting the vaccine because they were exposed before the vaccine could create an immune response, they got a strain of flu not covered by the shot or another virus or germ entirely, or because their bodies don't respond as strongly to the vaccine.

"For people 65 years and older, there's a high-dose flu vaccine that may be more effective," Dodds said.

People who become ill after vaccination are likely to have a less severe illness than they would have without the shot.

In any case, try to avoid spreading whatever you have. "If you're sick, stay home," Dodds said. "Try to give yourself at least 24 hours from the end of fever before you get back to work or around other individuals. And also remember to see your doctor if you get sick, because there are antiviral medicines that can help lessen the severity and shorten the disease."

In each state about 600 people die each year from flu-like illnesses.