Golden Globes kicks off a season of style

What's black and white and red all over? The Golden Globes red carpet. Add a dash of shimmering nude hues and some cool pastels and you've about got the landscape of the award season's first big hurrah down. 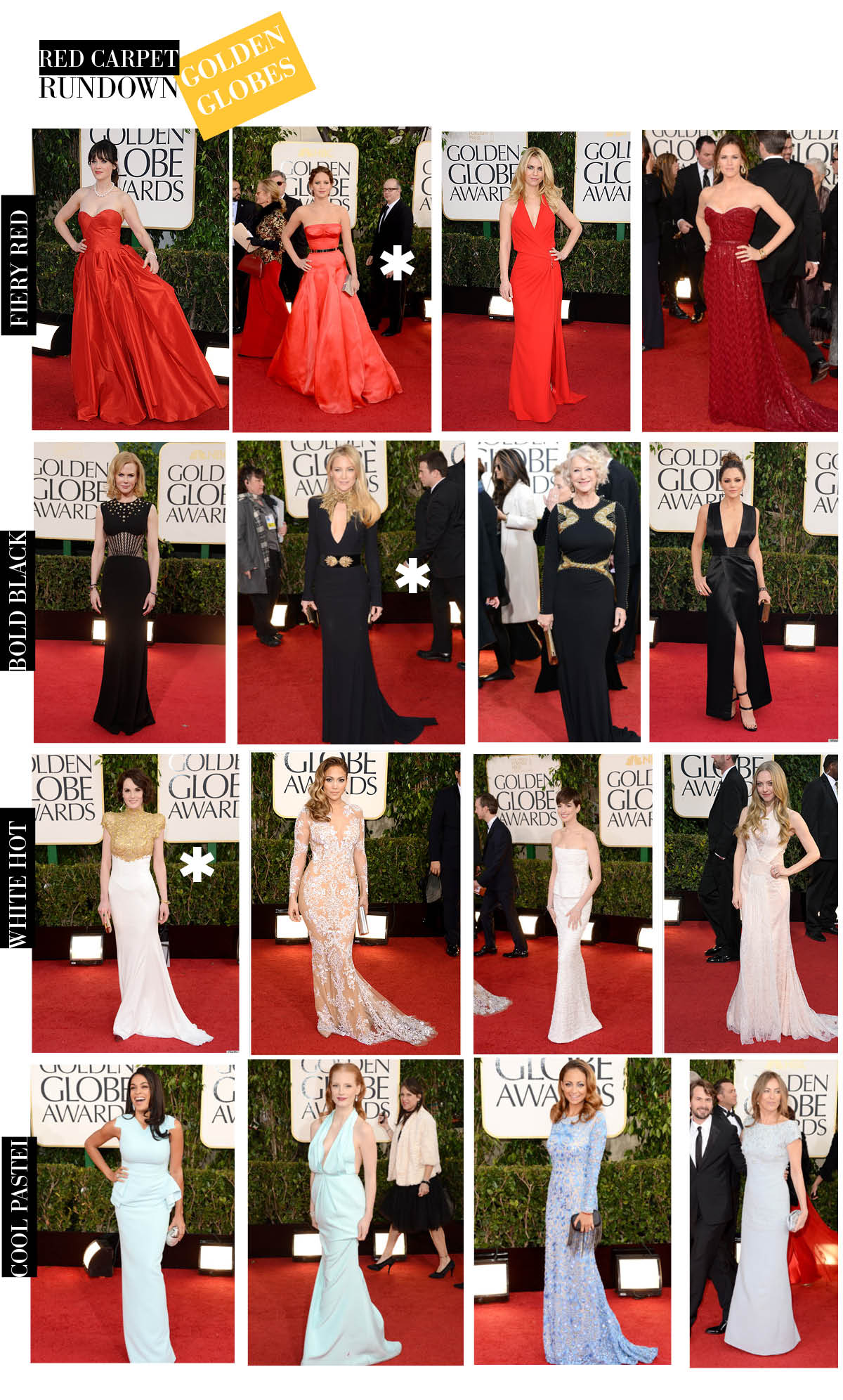 If there were a color of the evening it surely would be red. Vibrant, bold, bright. Red. In voluminous ball gowns like Zooey Deschanel's Oscar de la Renta to uber sexy Claire Danes (isn't Jordan Catalano kicking himself now) who we'd hate for looking so good four weeks post baby if she weren't still the Angela Chase in us all and we were loving the always class act that is Jennifer Garner.

While we're on the subject of Jennifers, that Jennifer Lawrence has me positively style smitten. The girl is on fire (Hunger Games pun unashamedly intended). She was flawless in Dior and delightful as a winner. We're dying to see what she'll be rocking this awards season.

We've been talking about this rumor that white is the new black and while this IND Styler still refuses to hold in esteem anything as the new black other than black, I will concede that a bevy of ladies were beautiful in blanc. Chief among them were the ever fabulous ladies of Les Mis - Anne Hathaway and Amanda Seyfried. Amanda was ethereal in Givenchy while even at 98 pounds Anne still looks smashing (bring the girl a couple Meche's king cakes and we'd like her look a lot more. But, she starved for her art so we forgive her temporarily too slight frame). After all the girl wore Chanel so really what's there to complain about? She was modern perfect. Simplicity done right. So fabulous with that little pixie 'do it has me ready to do some chopping (husband can quit hyperventilating, I'm not that brave).

Jennifer Lopez was dressed (just barely) in white. Her Zuhair Murad lace dress was amazing. To be honest, I'm kind of over the half dressed, half naked celeb thing. But, she's J. Lo and she has a rockin' body and her hair was flawless so we'll give it to her. White done right.

And then there was newcomer Michelle Dockery in Alexander Vauthier. One of my absolute favorites of the night. The gold and white dress she chose was equal parts sexy, modern and nearly vintage in its approach. There was something very Alexander McQueen about it all (and if you know me, you know how I feel about McQueen). Ah, McQueen.

Both Nicole Kidman and Kate Hudson were killer in McQueen. Black with bold gold accents were certainly on point for both ladies. Proof that black is anything but boring. Over in the black and bold corner we've also included the ever fabulous Helen Mirren. Truly this woman knows how to do it right. On trend. Sexy. Age appropriate. Fit for a queen. She rocked Badgley Mischka with a long sleeve. (Naomi Watts looked amazing with a long sleeve as did, of all people, Nicole Richie). Katherine McPhee was also sleek and anything but dull in black thanks to her flawlessly cut dress from Theysken's Theory. We loved her black polish and super sexy heels as well.

While Katherine was sexy all uncovered up, we found some utterly covered ladies that were anything but prudish. Back to that Nicole Richie (she's come a long way, baby) who was amazing in blue. Rosario Dawson was rocking one of our favorite ongoing trends that can go from day to night - the peplum. And Best Director nominee Kathryn Bigelow was absolutely chic in an ice blue sleek dress with short sleeves.

We were also eyeing Jessica Chastain with her pale sea blue Calvin Klein. She's the other new style crush I can't get enough of since she wore (of all people) McQueen last year. While this dress doesn't sing, she certainly looks beautiful and the color is perfection with her perfectly pale skin and red hair.

For the worst dressed, I shudder to put one my personal style icons on the list - the usually fabulous Sienna Miller in a bizarre floral dress that was anything but chic. Sorry, Sienna. But, we just don't get it. It can best be described as a really bad Michelle Williams moment. If Michelle had temporarily lost half her brain.

In fabulously dressed shout outs, a nod must go to Lucy Lui for her fearless floral frock (word is spring will be all about floral print) and the always beautiful Jessica Alba in a sexy sherbet hued dress.

If this red carpet was any indication we're in for a tasty season. Who went big on the carpet? And who do you wish would've just gone home? Sound off!