Mello Joy on the move? 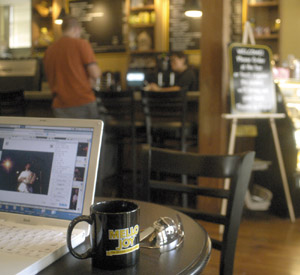 In the heated competition between Community Coffee and Mello Joy, the red bag has had a leg up — until now. Mello Joy wants to relocate its out-of-state roasting operation to Lafayette, a move that would put it on a more competitive playing field with rival Community, which avoids high transportation and fuel costs by roasting its beans much closer to home in the city of Port Allen.

Mello Joy officials — among whom are businessmen Wayne Elmore and Clark White — declined to comment on the planned move, and it's unclear how many jobs the new facility would create. On Monday, Mello Joy had planned to ask the Lafayette Zoning Commission to amend general business zoning to allow for coffee roasting, which is currently permitted only in the "light industry" zoning classification. Though Mello Joy did not indicate where it plans to locate, sources say the company may be considering a site on Moss Street, across from Schilling Distributing's headquarters. That site is zoned for general business.

But when Lafayette Consolidated Government's zoning staff recommended against the change right before Monday's meeting, Mello Joy made a verbal request that the commission delay the public hearing until next month's meeting. "The Zoning staff researched the roasting process and its regulation in communities around the country," the staff recommendation reads. "Local regulations are consistent in permitting the use ... only in industrial areas, with the exception of 'micro-roasting' as part of a coffee shop business. The most common source of neighborhood complaints, even resulting in lawsuits, is the smell associated with the coffee roasting process."

The proposed Lafayette roasting operation, which may include a retail coffee shop, has been in the works for several years. Company officials told The Independent Weekly in late 2003 that they hoped to begin roasting here within a year.

The Mello Joy brand, founded in 1936 and purchased by Community Coffee in 1975, returned to the market after Community neglected to renew its registration in July 2000. Brian Begnaud, the grandson of Mello Joy founder Louis R. Begnaud, picked up the dormant brand and revived his family's tradition. (Elmore and Clark came in later as investors.) Since that time, the yellow bag has made its way into restaurants, food service establishments, offices and grocery stores throughout Louisiana, Texas and Mississippi.

Dagwood's Sandwich Shoppes, a concept launched in 2006 by Dean Young, who took over the "Blondie" comic strip in 1973 after his father's death, is coming to River Ranch. The company is headquartered in both Clearwater, Fla., and New Orleans, where it runs a test kitchen. The 1,600-square-foot Lafayette store is locating next to the new CC's Coffeehouse on Camellia Boulevard and should be open by the end of August. In addition to the skyscraper Dagwood sandwich made famous by the comic strip, the shop offers New York-style corned beef, New Orleans-style po-boys, chicken curry and Cuban sandwiches, along with soups and salads. The concept is centered around a unique visual experience that allows customers to step into a comic strip world, complete with plasma TVs running looped cartoons. (For a guided tour, visit www.dagwoods.us.com.)

"Another difference is we'll be serving wine and beer," says Lance Harris of Alexandria, a Dagwood's market partner who has the rights to establish stores and award franchises in Louisiana, Alabama and the Florida panhandle. Harris has six stores under development; the franchisees for Lafayette are Lawrence and Kyle Drerup, also of Alexandria. "They will be developing four more in the Lafayette area in the very near future," Harris says.

Stone CEO David Welch says the sale to Newfield is part of a strategy the company announced in January. "This sale is consistent with the four key goals we set for the year — hit or exceed our production target, drill successful exploitation wells, execute the sale of the Rocky Mountain properties and selected Gulf Coast properties, and materially reduce debt through these asset sales and free cash flow." Welch says after the close of this transaction, scheduled for the end of June or early July, Stone will have significantly improved financial flexibility and be in a position to evaluate a number of different investment options.

At year end 2006, the estimated proved reserves associated with this divestiture totaled 182.4 billion cubic feet equivalent, and for the first quarter of 2007 the production from these properties averaged about 40 million cubic feet equivalent per day. The divested properties include Stone's interests in the Pinedale Anticline, the Jonah field, the Williston Basin, the Scott field and several smaller producing areas. The sale also incorporated net undeveloped acreage of approximately 550,000 acres.

Less than a month before announcing the sale to Newfield, Welch was notified by the U.S. Securities and Exchange Commission that its investigation into Stone's 2005 restated reserve estimates had come to an end with no action taken against the local company. Authorities had been investigating whether reserves were overestimated intentionally to make the stock more appealing, or to help company officials make more money. The SEC clearance, however, didn't settle the matter. The local independent oil and gas company still faces a host of lawsuits filed by shareholders who lost a tremendous amount of money when the stock took a nosedive on news of the overstated reserves.