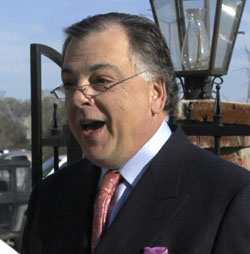 On the heels of last year's breakdown in talks between Lafayette General Medical Center and the Heart Hospital of Lafayette comes word of similar negotiations between Our Lady of Lourdes and the year-old specialty hospital.

Heart Hospital President Phil Young says discussions will likely go on for about four months and would not specify the type of partnership opportunities being explored. "We don't want to speculate at this point," Young says.

Lourdes spokesman Berch Stelly acknowledges that the Kaliste Saloom Road boutique hospital ' a for-profit venture between North Carolina-based MedCath Corp. and local doctors, including cardiologists and cardiovascular surgeons who once performed most of their procedures at General and Lourdes ' has hurt his not-for-profit hospital's business. Stelly maintains that Lourdes is working diligently to regroup. "We're not in financial trouble," he says. "We are doing things to correct our circumstances. We are not about to close our doors."

Over the past two years, Lourdes has had at least three rounds of work force reductions, mostly middle management employees whose work did not directly affect patient care.

Young and Robert Peebles, Lourdes' president, issued a joint memo clarifying that the discussions might not result in a partnership arrangement.

Lafayette General spokeswoman Donna Landry confirms that her hospital did entertain a "potential collaboration" with MedCath in 2004, but says the not-for-profit General's management backed away from the negotiations. "While we support physical collaborative efforts, we are very conservative and cautious of relationships which take resources out of the community," she says.

Landry maintains that the Heart Hospital of Lafayette has not had a significant impact on General's business. Open-heart procedures, for example, are down 15 percent in the past year but had been falling in recent years ' following what she claims is a national trend as a result of better technology and new medical intervention.

Several years ago, when the Heart Hospital made public its intentions to build a new facility, both General and Lourdes reacted with announcements to build their own heart specialty hospitals. Both projects have since been scrapped.

Bonnie Robert Will has left Tom Galloway's local TV group Comcorp of Lafayette and joined KATC TV3 as general sales manager. She replaces recently departed manager Tom Poehler, who left KATC for Comcorp in January. Poehler became Will's boss at Comcorp, an arrangement that lasted about a month before Will departed. She had worked for Comcorp for eight years ' most recently as general manager of Comcorp's KADN, the local Fox affiliate, and KLAF, a UPN station. Prior to that, she was sales manager for 99.9 KTDY, then part of the company's radio group, which was sold in 2001 for $39.6 million to Regent Broadcasting.

Sean Trcalek, who resigned from KATC on the same day as Poehler ' also to head to Comcorp ' has been replaced by Nancy Fawcett, who is now the local ABC affiliate's regional sales representative. She previously worked for Citadel Broadcasting, which owns a group of local radio stations, including 94.5 KSMB.

The reshuffling of personnel set off a firestorm of speculation about Comcorp owner Tom Galloway's plans to partner with Lafayette businessman/ophthalmologist Dr. Paul Azar Jr. to launch a new TV station ("Fuzzy Picture," March 16). Azar did not return calls seeking comment, and Galloway has a company policy of not commenting to the media.

After a 50-year journey that took it from downtown Lafayette to its current location in the Oil Center, Paul's Jewelry is expanding.

This fall the family-owned company, founded in 1954 by the late Paul Naomi and his wife, Theresa, will open a second store in River Ranch at the corner of Silverstone Road and Camellia Boulevard, near the antique store Le Marché. The 4,200-square-foot building features French provincial style architecture; the store plans to expand its line of offerings, which includes fine watches from makers like Rolex, Tag Heuer and Baum & Mercier and jewelry designs by Mikimoto and Scott Kay. (In Louisiana, Paul's has exclusive rights to Scott Kay's new sterling silver and 18-karat gold line of jewelry.)

Paul and Theresa's children, Patricia, P.J. and Nancy, own and operate the business. Patricia says the company is still determining what new lines it will carry at the River Ranch store. "There will be some traditional lines but also some fashion forward, cutting edge designs very unique to Lafayette," she says. "There are a dozen [companies] we're talking to, but we will narrow it to about four new lines. It takes a while to commit because it's a sizable investment, and you want to be real careful about what you choose ' we have to fulfill people's expectations of Paul's quality."

On Wednesday, March 16, Sarah Libby signed off for the last time at KLFY TV10. As first reported in The Independent Weekly in January, the local CBS affiliate's chief meteorologist has joined The Weather Channel and is now living in Atlanta, which means local fans can still see her on Internet video forecasts during the week and on their televisions over the weekend on the 24-hour national cable network.

By any measure, the new gig is a big break for the Massachusetts native ' and another meteorological loss for the local CBS affiliate. In 2003 Libby replaced meteorologist Rob Perillo, who jumped to competitor KATC, the local ABC affiliate. KLFY mounted an unsuccessful legal challenge against Perillo to uphold a non-compete clause in his contract. Libby, who worked at the station for five years, also was under contract but says KLFY's management was "gracious enough to let me go." Ryan Burchett, who most recently was chief meteorologist at the CBS affiliate in Cedar Rapids, Iowa, has replaced Libby.