Home meals without the fuss 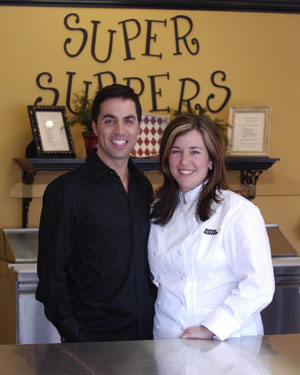 Acadiana natives Neal and Ashley Guidry are bringing home cooking ' in the form of a Ft. Worth-based franchise ' to Lafayette's too-busy-to-cook population. Super Suppers, located at 2940 Johnston St. in the Winnwood Shopping Center, features rotating dishes like Rosemary Balsamic London Broil, Marmalade-Glazed Pork Chops and Chicken Chili Enchiladas ' all of which can be quickly grilled or baked at home.

"The goal and mission is to get the family back to the dinner table," says Ashley of the concept, started in 2002 by The Culinary School of Ft. Worth. The menu is listed on the Internet at www.supersuppers.com, as is a calendar with session times available for customers who prefer to assemble their own meals.

Twelve menu options rotate monthly, and customers come into the location and follow recipes as they move through prep stations, taking the meals home to eat that night or freeze. "You could literally assemble a meal in five minutes," Ashley says. (For several meals, you'll need an ice chest or other means of transport.)

Another option is to place an order online and have the meals ' healthy versions of popular dishes ' pulled together by Super Suppers.

A choice of prepared meals is always available in the "grab and go" frozen section, and Wednesday is the only day of the week designated for walk-ins who want to prepare a meal. "Every other day you register for a session or call in [an order]," Ashley says. The sessions are designed for making six or 12 meals, and each entrée has about six servings. A package of six meals is $109 ' making the average price about $3 per serving.

Some dishes, like the fish tacos now being featured, require a bit of assembly at home, but most are ready for the stovetop or oven.

Super Suppers has 104 stores nationwide and plans to open 200 more by the end of the year.

A little more than a year after filing Chapter 11 in U.S. Bankruptcy Court, Body Masters Sports Industries of Rayne is back to doing what it does best ' designing and manufacturing first-rate sports equipment ("Body Masters seeks protection from creditors," Jan. 26, 2005).

The federal court and the 27-year-old company's creditors have accepted the reorganization plan, which the company maintains has allowed it to emerge a stronger and more efficient operation. At the time of the Jan. 10 bankruptcy filing, Body Masters had at least $6.8 million in debt.

While in bankruptcy, the company overhauled its business plans, practices and manufacturing processes, according to a press release issued in early March. As a result of these improvements, the company was able to launch a new premium line of strength equipment called the Premier Series, which features its proprietary steel tubing design. Body Masters has supplied equipment to facilities all over the world, including local gyms and health clubs like Red Lerille's.

Company officials, who were at a fitness trade show in Las Vegas on Monday, could not be reached for comment.

When it comes to retail sales growth in Lafayette Parish post-hurricanes Katrina and Rita, records are being broken on a monthly basis. January's $387.5 million in retail sales is a staggering 27 percent higher than January last year, an early indication that Lafayette Parish is poised for a major sales tax windfall in 2006. (The increase from January 2004 to January 2005 was 4.8 percent, considered strong at the time.)

Hurricanes Katrina and Rita increased the pace toward the end of 2005, contributing to the parish's 13 percent increase in retail sales from 2004 to 2005. The biggest retail month of the year, December 2005 sales increased 22 percent over December 2004. Parish officials say the swelling revenue stream will help ease the burden of a community strained by its overnight growth.