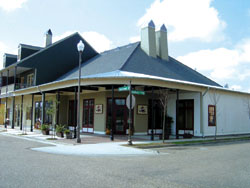 One of the Crescent City's well-known Taste Buds, the culinary talent behind the Semolina and Zea Rotisserie & Grill concepts, is part of a New Orleans-based restaurant group that will open a Café Roma in River Ranch in May. The casual dining eatery will fill a niche in River Ranch, becoming the first to offer delivery service.

Two years ago Taste Bud Greg Reggio teamed up with Lee Yurtal, Upton Pearson and Haluk Dogru (who founded Café Roma in the early 1990s) to assist in the development and expansion of the casual Mediterranean café. The group has three stores: a corporate location is on Leon C. Simon Drive near University of New Orleans, and franchised stores are on New Orleans' West Bank and in Kenner. River Ranch will be the partners' fourth. (Different entities or individuals, including some in Reggio's group, own other stores in the state through licensing agreements.)

Café Roma makes the dough for its gourmet pizzas and breads every day, Reggio says, and also features pasta, sandwiches and salads ' all at moderate prices. Dishes feature fresh ingredients and are rich in olive oil and Mediterranean herbs.

A circular bar with a large selection of wines, bottled beer and cocktails will greet guests as they enter the restaurant; a second dining room with booths and banquette seating is behind the bar. Classic Tuscan columns are being incorporated into the space's warm Mediterranean colors and textures.

Reggio cites the ongoing development in and around River Ranch as key to the decision to locate in the traditional neighborhood development. "It's a great little part of Lafayette, with somewhat of a captive audience," he says. The café is taking over the spot on Stonemont Road formerly occupied by Lagniappe Bakery, which shut down late last year. The space is also being renovated to expand and encourage al fresco dining, which will complement the adjacent outside seating area offered by CC's Coffeehouse. Café Roma's outside dining will be covered by the existing large porch that wraps around two sides of the building. The restaurant will seat a total of 150 customers.

Reggio, who knows the competitive Lafayette restaurant market well, is confident the café will be successful. "We feel we can do well within the Ranch, as well as service guests who come to visit," he says.

In 1990 Reggio joined forces with Hans Limburg and Gary Darling to form Taste Buds Inc., a culinary and restaurant development team that launched Semolina in 1991 and Zea in 1997 ' both in the New Orleans area. The two concepts eventually made their way to Lafayette, with Zea enjoying tremendous success since opening on Doucet Road in 2001. Though it launched strong, Semolina (which the Taste Buds sold about seven years ago) shuttered its Ambassador Caffery Parkway location last year after failing to negotiate a new lease agreement. It had hoped to re-open but has yet to make another move in the market. Reggio says early this year the Taste Buds resumed management of the Semolina chain.

Most of the Buds' recent efforts have been in the development of the Zea Rotisserie chain, which now has six stores and a seventh under construction in Pensacola.

Beginning in June, the Lee Michaels Fine Jewelry store in the Mall of Acadiana will undergo an expansion and facelift that will almost double its size. In addition to fine diamonds and lines like Mikimoto and Rolex, the store sells distinctive gifts, including Lladró porcelain figurines, Waterford crystal and Reuge music boxes.

The new sales floor will be approximately 1,800 square feet, according to store manager Kim Henry. "We are the smallest store [in the Lee Michaels chain]. We've wanted to expand for years," Henry says. The expansion will take in the adjoining spot that temporarily housed a crystal jewelry store and before that Louisiana Hot Stuff, which relocated to the Super Target Center in the summer of 2003.

The renovation project will take about six weeks, with the store closing for a short period, Henry says.

Lee Michaels, started 26 years ago in Baton Rouge by Lee Michael Berg and his wife, Brenda, has eight stores. The Lafayette location has been in business since 1985.