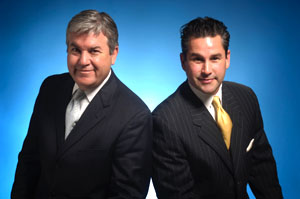 Joe Moseley and Roy Hollard became good friends in the late 1980s, when the two worked together in one of Lafayette's premier men's clothing stores, the now-defunct Gaidry's in the Oil Center. The two hunted and fished together, and their conversations over the years eventually turned to talk of launching their own concept.

Moseley's career most recently took him to Brother's, and Hollard spent the past 11 years at Steve's Clothiers. In recent weeks, the two left their respective employers to open a 3,000-square-foot store, which will face Camellia Boulevard, offering styles ranging from resort casual to formalwear. "We're calling it classy contemporary with a twist," says Moseley.

The local economy, coupled with an opportunity to open in a building situated in one of the city's hottest growth spots, has fueled that plan to fruition, Hollard says. "We're finally getting the opportunity to do our store. We feel like we're in the right place at the right time."

They also are banking on the tide turning away from "casual Fridays" (which may have gone a bit too far into the entire week for some professionals) and back to sharper dressing. "In the Northeast, brokerage firms and other professionals are starting to dress again, and they set the trend," says Hollard.

Hollard says Acadiana's male shoppers ' and their wives, whom he predicts will account for as much as 65 percent of Moseley & Hollard's business ' will be pleasantly surprised at some of the price points. "We're mid- to high-priced," he says. "[We] don't want to run anybody off."

Early last week, the business partners returned from Dallas, where they were able to make special Sunday appointments with sales reps from seven clothing manufacturers, mainly because of their reputations and relationships in the industry. "We were in time to buy fresh new fall 2005 merchandise," Moseley says. "It was close, but we made the cut."

Moseley says buying will also be done at semi-annual markets in New York and Las Vegas. "We'll always be on the cutting edge," he says. "We'll go to these international markets, where people come from all over the world. That's when you really get the exposure in our business."

The partners are confident they'll see a lot of the familiar faces they've served in their combined five decades of experience in men's retail. Says Moseley, "We're a 24-hour service. If a customer needs us, we'll be there. We have a personal relationship [with customers], a friendship we really enjoy."

The ad exec perhaps best known for celebrating his advertising accolades by dancing on table tops at the annual ADDY Awards event is calling it quits this Friday.

Rob Davis, who left Graham Group in 1994 to form DavisPartners ' taking a slew of talent with him ' is filing personal bankruptcy and will liquidate his assets to pay off what he says is more than $130,000 of debt.

Davis says the firm's financial problems stem from the loss of two regional health care accounts about seven years ago. Despite that loss, the firm kept its 30 employees on the payroll, he says, which drained the company's resources. "We didn't give up without a fight; the last few years have definitely been a struggle," he says. When he announced the firm's closure last week, the staff was down to seven employees.

Kiki Frayard was a Graham employee who left with Davis in the mid-90s. "He doubled my salary and made us lots of promises, one of which was to make us all partners," says Frayard, who was also the first to bail on DavisPartners to form her own agency in 1995. "The honeymoon was over quickly," she says. In 2000 she rejoined Graham Group, where she currently serves as vice president of creative services.

Two years after Frayard's departure, another group ' Sara Ashy, Cathi Pavy, Cherie Hebert and Karla Meche ' left Davis to start BBR Creative. Then Jim Morvant and Annette Broussard headed off to form Morvant Marketing Group. In more recent months, it was Chandra Gordon and Camille Breaux who quit DavisPartners to launch an agency based in Mandeville.

"We won 220 awards, and we did birth four agencies," Davis says. "We had some real magical moments."

"It's sad to see any business in Lafayette fail," says Frayard. "Rob's talent was in being able to sell, but he was not a very good businessman. When he worked for George [Graham], we went out and got some of the biggest accounts we had. He knew advertising and he knew marketing, and he could fire up a staff."

Durel Mail & Imaging to launch in May

At least one former DavisPartners employee already has a plan for her career. Graphic designer Sheila Durel is teaming up with her husband John to start Durel Mail & Imaging Technologies in the Enterprise Center of Louisiana, a business incubator, on Evangeline Thruway.

John, who most recently worked for Tri-Star Graphics Group, says the new company will offer bulk mailing services for everything from post-cards to magazines, with the ability to take a project from concept to the customer's mailbox. "We can do turnkey," he says.

The company will also offer high-quality digital printing. "We'll be exclusive digital," John says. "We're not going to be doing any offset printing at all."