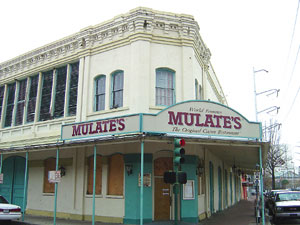 On Jan. 11, Boutté launched the 100-seat Tee Mulate's in the same building as 15-year-old Mulate's on Julia Street, which sustained roof damage and a multi-million-dollar looting loss. "They even stole all the tables and chairs," says Mulate's General Manager Murphy Christina, who is married to Boutté's daughter Monique. "We're starting over from the floor up."

Tee Mulate's is located at 743 Convention Center Boulevard in the space previously used for private parties (and once home to the short-lived Zydeco Jeaux's concept). Murphy says it was important to put employees back on the payroll and work out any kinks before the grand re-opening of Mulate's, scheduled for April.

Tee Mulate's features live music on Friday nights and is open for lunch and dinner, Monday through Friday. "We're still trying to get the word out," says Murphy, who notes that on Friday, Jan. 20, the restaurant had a 20-minute wait. He's not sure what'll happen to Tee-Mulate's after April. "It's kind of wait-and-see. We'd like to operate both."

Since the storm, 870 Orleans Parish restaurants have re-opened, including 123 in the French Quarter and central business district, and 91 in the warehouse and uptown areas, says Kim Priez, vice president of tourism for the New Orleans Convention and Visitors Bureau. "I can tell you it's less than half, but that's 200 more than what we had two weeks ago."

On a recent Friday at lunchtime, storied New Orleans institutions like Galatoire's in the French Quarter were bustling with business. But others around town ' like Brennan's on Royal Street, Commander's Palace on Washington Avenue and Dickie Brennan's Steakhouse on Iberville Street ' are still scrambling to reopen, Priez says. A major holdup is the demand for custom-made refrigeration systems, she notes.

To find out if your favorite New Orleans eatery has reopened, go to www.neworleanscvb.com or www.neworleansinfo.com. "We nag our restaurants to please go there because things are moving so quickly it's hard for us to keep up," Priez says.

Lafayette restaurateur Ema Haq is busy renovating the interior of the old Edie's in the Acadian Village shopping center on Pinhook Road, which he'll open in less than a month as Ema's Restaurant, picking up where Stanley Leece left off.

Leece closed the popular lunch spot late last year after 15 years in business. Haq, who's had Bailey's Seafood & Grill on Johnston Street for the past 13 years (and also runs an offshore catering biz) says the 4,400-square-foot Ema's will offer "down-home cooking." Much like Edie's the menu features chicken-fried steak, meatloaf, fried catfish and barbecue on Sundays. "It'll just be a minor [menu] change, not much," Haq says.

Leece, meanwhile, has expanded his breakfast joint and menu at Edie's Express at Pinhook and Bendel roads. He took over the spot next door that formerly housed Chargrill Now.

FROM LIPSTICK TO SMOOTHIES

After two years of business downtown, funky beauty shop Beyond Bliss closed its doors at 302 Jefferson St. Jan. 13 to make way for a smoothie bar, Fruitaholics.

Owners Christy and Andrew Klenert are making the transition from beauty to smoothie so that Christy can stay home with the couple's two young children. Christy's custom-blended bath, body and makeup products are still available at The Buzz, located at 102A Oakcrest Drive, just off Johnston Street.

"We have the great space downtown, and we've been talking about what's missing downtown, what people want," says Andrew. "I didn't want to walk away from that building."

When in opens in February, Fruitaholics will introduce a healthy alternative to downtown's offerings, with smoothie names such as "Blushing Banana" and "Peach Me I'm Dreaming." Other smoothies will include add-ins like muscle building powder and herbs.

Veron Village on the 400 block of Rena Drive is getting a much-needed facelift ' and a new name. Robbie Bush bought the 5,000-square-foot portion that previously housed Little Verons, which built a new grocery store across Ayreshire Drive more than two years ago, and is renovating it for his travel agency, Associated Travel Group.

Bush purchased Associated Travel in 1995 after having worked there since 1978. (The agency's been in business for almost four decades.) Bush was leasing on Coolidge Street for about 17 years; when he decided to buy, he says he was unable to find a suitable location with adequate parking in the Oil Center.

The opening of Camellia Boulevard a couple blocks from Rena attracted him to the new site. "There's always been a fair amount of traffic from people going that [back] way to the mall," Bush says, but Camellia created additional access.

The proposed new name of the center is Rena Drive Village, which has two other owners, Bill Rucks and J. Hall Johnson, and several tenants. The travel agency will take over 3,800 square feet, and Bush will have another 1,200 square feet to lease. He hopes to be in the new location by April.