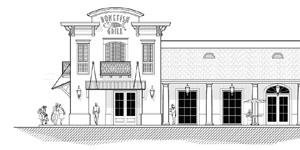 After months of negotiations ' and a close deal that almost brought it to the bottom floor of the new four-story Onebane office building on Camellia Boulevard ' River Ranch has landed one of the state's first Bonefish Grill restaurants. It's a significant coup, as other major retail centers in Lafayette were also courting the restaurant, which opened to rave reviews in St. Petersburg, Fla., in 2000 and has since expanded to about 50 locations throughout more than 13 states.

But even bigger news is the River Ranch development Bonefish will help anchor. Bonefish is one of four restaurants ' the other three are not yet disclosed ' planned for a multi-complex $28 million mixed-use development that gets under way in April. "We call it our Main Street [center]," says River Ranch developer Robert Daigle.

A major fountain feature will be the focal point of this new development of River Ranch, with Main Street connecting Camellia and River Ranch boulevards. Daigle says two general contractors, one local and one based out-of-state, will construct the 300,000 square foot complex, which includes 25,000 square feet of retail, 160 apartments, 65 individually owned condos and 30,000 square feet of office space.

The architect handling the major phase is Gus Pelias of Park Design Group based in New Orleans. Another phase, which is primarily retail, is being designed by Pécot & Company Architects of Lafayette; Bonefish anchors this center that fronts both the south side of Main Street and Kaliste Saloom Road.

Bonefish bills itself as a moderately priced "polished casual seafood restaurant" with three-dimensional metal fish sculptures and other fishing motifs throughout. Daigle says the restaurant has eight daily selections of fresh fish, with a variety of options for original sauces or toppings. "The seafood is flown in fresh daily and is wonderful. The appetizers and salads are incredible, and it has one of the liveliest bar areas I've ever seen," he says.

The large bar includes three tall, rectangular communal tables that act as an extension of the bar, each seating eight to 10 people. The full bar area seats 80, and the restaurant can accommodate about 225. Bonefish's standard design elements ' including stucco, canopies and bench seating ' will be supplemented with balconies, louvered shutters and a front porch to complement River Ranch's existing architectural character.

The accolades have been piling on for the Bonefish concept. Last year, Indianapolis Monthly magazine named it one of the area's Best Restaurants of 2004. "We've yet to meet a local seafood lover who doesn't praise the place," the magazine noted.

The only other Louisiana Bonefish is scheduled to open this spring in Baton Rouge's Towne Center on Corporate Boulevard, a lifestyle center that includes Fleming's, Talbots, Whole Foods, Carrabba's and PF Chang's China Bistro.

For now it's only conjecture, but it's making headlines in the national retail news. Major media outlets are reporting that Cincinnati-based Federated Department Stores, operator of stores such as Macy's and Bloomingdale's, is in discussions to buy St. Louis-based May Department Stores, owner of Lord & Taylor and Foley's, which has a location in the Mall of Acadiana.

If the deal comes to pass, the newly constituted entity would have about $30 billion in sales and about 1,000 stores. Analysts are predicting that Federated would upscale the May concepts, possibly converting many of them to Macy's department stores.

This is not the first time there's been rumor of such a deal. The Wall Street Journal broke the story on the most recent speculation and also reported that Federated and May held unsuccessful merger talks in 2002 that foundered partly over management concerns. Less than a month ago, May's chairman and chief executive, Gene Kahn, abruptly quit the organization, possibly clearing the way for a potential merger, analysts surmise.