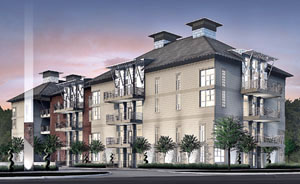 A young New Orleans developer has teamed up with local architect Steve Oubre to bring a $15 million "true New York style SoHo loft living" project to Lafayette. The first phase of Loft Twelve 45 gets under way on South College Road in about six months, says Dimitri Menutis, and will offer 24 two and three-bedroom units. "It's a very new product for Lafayette," notes the 33-year-old developer.

Units in Loft Twelve 45, located on a 4.5-acre tract from Coulee Mine to Girard Park Drive, range from $145,000 for a one bedroom (coming in Phase 2 and 3construction) to $350,000 for a three-bedroom penthouse. Spaces climb from 800 to 2,100 square feet. Tenants also receive a complimentary amenity package that includes a workout room, tanning and spa facilities, a putting green, and outdoor grilling area.

The bottom floor of the development will offer commercial lease space; Sharon Brothers already is planning to relocate her year-old South College Road Kitchens with a View, what she refers to as "a unique cabinetry boutique," to Loft Twelve 45 when the first phase is completed in the spring of 2006. Her live-work space is now on the property slated for development, as are two other homes. All three will be leveled.

Menutis has worked for his family's airport retail business, opening more than 90 concession outlets in airports across America, and has developed and renovated historic buildings in New Orleans' French Quarter.

Monitos' Tapas Bar back on track

William Annesley's ship has come in: he's found an investor for his downtown restaurant venture. Annesley had hoped to introduce Lafayette to its first "tapas" concept, Monitos' Tapas Bar and Restaurant at 406 Jefferson St., last September, but he's about a year behind schedule.

"I've financed my other restaurants within a matter of weeks," Annesley says in his distinct English accent. "Normally, just on the résumé, you're able to raise the money. It was not quite as easy as I thought it was going to be."

Actually, it was more luck than design that brought together Annesley and his partner ' who for now is a silent investor. The restaurateur, who has had successful concepts on the West Coast, had downscaled his dream and was looking for a smaller venue when his investor was seeking to start a downtown restaurant. The Jefferson Street building's owner, Jim Foreman, hooked the two parties up, and they finalized the deal two weeks ago.

Foreman's wife, Simone, will relocate her modeling agency, Images, to the second floor of the building, which is at the corner of Jefferson and Garfield streets. The Foremans also hope to add another retailer to the bottom floor, in addition to Monitos, which will occupy 5,000 square feet.

Annesley says Lafayette has never had anything like Monitos' (the Spanish word means "little monkeys"). "It's not white tablecloth. It's more bistro ' something like you'd see in New Orleans, Houston or New York. There's a bit of a scene going on in the front. You're going in for a dining experience that's relaxed, accessible and affordable," Annesley says. "Although we're going to have a full bar, we're really pushing the wine bar aspect, great wines by the glass.

"It's broken up into a lot of nooks and crannies, all of which are designed to work well together. We've had a year to work on something that's totally new to the area. It's just a different vibe."

Tapas bars, which specialize in small dishes similar to appetizers, encourage patrons to share the plates with friends and sample a number of dishes.

Annesley and his wife, Karina Carrero of Lafayette, relocated to town early last year to open the restaurant. He also hopes to one day open a restaurant in Spain, where his family has a home.

Last week Stacy Romero launched Acadiana Sold, an online real estate service for people who want to sell their own homes. "I'm not a Realtor or a broker; I'm here strictly for advertising purposes," says Romero, who takes digital pics of the homes and posts them on her site, www.acadianasold.com, for a fee of $99 to $349, depending on the value of the home.