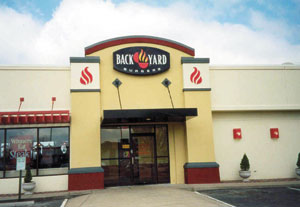 A grocery store owner known for his homemade hamburgers turned that recipe into a fast-food drive-thru concept in 1987 in Cleveland, Miss. In 1993 the company went public and now has 175 corporate and franchised stores, most with full dining rooms. Based in Memphis, Back Yard Burgers is making its Lafayette debut in the old Krispy Kreme location on Ambassador Caffery Parkway in front of Wal-Mart.

It's the first of two locations planned for the Hub City.

Franchisee Rickey Ainsworth and his business partners, Harvey Marcus and his son, Duke, have their corporate office in West Monroe, though Ainsworth lives in Baton Rouge. The partnership already has opened a Back Yard Burgers store in Baton Rouge and in Lake Charles, along with nine Popeyes' locations in north Louisiana and southern Arkansas. (Another franchisee owns the Denham Springs and Mandeville Back Yard Burgers locations.)

The partnership purchased the Krispy Kreme site for $850,000, and the total investment (including startup costs) will be about $1.3 million, Ainsworth says.

"What sets the concept apart is by far the quality of our hamburgers and chicken sandwiches," Ainsworth says. Back Yard serves a third pound of Black Angus Beef charbroiled over an open flame; special offerings include mushroom swiss, bacon cheddar, a seasoned patty with hot pepper jack with Creole mayonnaise, and a Hawaiian burger with grilled pineapple. The marinated chicken served in a variety of sandwiches is also cooked over an open flame. "It's a premium fast-food restaurant," Ainsworth says.

Back Yard Burgers hopes to open its Lafayette restaurant in mid-October.

Underwood, who opened her Lafayette Tiger Lily store four years ago, plans to have the 1,600-square-foot Houston location open by mid-October. Lafayette native Kimberly Randolph will manage the new store, which is going into Braes Heights shopping center, located west of Rice University. Randolph's been living in Houston for a decade, and she and Underwood are longtime friends.

Closer to home, Underwood is relocating the hair salon from the back of Tiger Lily's Heymann Boulevard store to 1000 Coolidge St., in the former Jessica's Bridal across from the Cigar Merchant. Called Cabelo, the shop is leasing space to five stylists and will also offer jewelry, purses, shoes and gifts. "They'll have every age group coming through the door, so I will cater to a broad demographic," Underwood says.

Underwood plans on supporting the local arts community by allowing artists to display their work throughout Cabelo, which she hopes to open in early September.

When the salon moves out, the back of Tiger Lily will be converted into additional retail space.

A new service launched by two Lafayette natives aims to solve the clutter and nuisance of coupon-clipping by bringing it into the technological age.

"We call ourselves a mobile marketing company," says George Boudreaux, who handles sales for Mysimbook.com, a text messaging service launched in June by Doug Daigle and Brandt Broussard. Daigle is a local real estate agent, and Broussard also has a background in real estate.

Sign up for the free service and if you have your cell phone handy, you'll also have your coupons ' text messaged specials and discounts from local businesses like New York Pizza & Deli, Case Olé, La de dah, Shoe-La-La, Frozen Sun Daiquiris and River Spa. "It's restaurants, bars, sporting events, coffee houses," Boudreaux says. Just show the merchant the specific text message on your phone to get the discount.

Mysimbook.com is targeting an 18 to 40-year-old demographic and acknowledges that text messaging is more widely utilized by a younger crowd. "I think we've only had three or four people that have opted out, older people who helped test [the service]," Boudreaux says.

The service guarantees customers won't get more than two text messages per day; Boudreaux says messages usually go out every other day.

The company's been getting the word out with television advertising on Cox, as well as the online service MySpace.com. It also has an online kiosk at the UL Student Union that includes a digital billboard advertising its participating merchants' discounts. "The response rates that we are getting are really unprecedented when it comes to marketing," Boudreaux says, explaining that early data reveals about 20 percent of those receiving Mysimbook.com's text messages are using the discounts.