I was probably in seventh grade when I heard Johnny Cash Live at Folsom Prison for the first time. As a very young man, I would discover B.B. King's Live at Cook County Jail. By that time, I was convinced, or convicted, you might say, that I was a "lifer" in the field of music. These recordings touched me very deeply. To hear the utter joy and raucousness of the inmates, the connection between the inmates and those iconic performers and to hear those impassioned performances was a revelation. 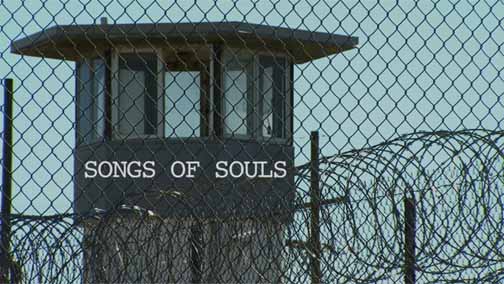 The Musicians Local 116 in Shreveport would pay scale, through the Musicians' Trust Fund, to go and entertain at the Federal Correctional Institution near Texarkana. I was on board for a couple of those gigs, but that's a different story. For now, fresh off the heels of the Cinema on the Bayou Film Festival premiere of Songs of Souls, I will tell the Angola story, of playing music with some gifted friends for the residents of Camp D, Angola State Prison, and being part of a film that documents that story.

In 2010, Ronnie Clifton, a total stranger, caught me on the way into my Charley G's gig. He told me he was pulling a grant together, had spoken with wardens and such, and wanted to film me and a few others performing at Angola. That sounded like a golden opportunity to me, but I didn't know this gentleman. He seemed nice. He said he would like to get Eric Adcock, Roddie Romero and Michael Juan Nunez to perform as well. That sounded good. Then he told me the hook: that in the spirit of Leadbelly, a.k.a. Huddie Ledbetter, the Louisiana legend who sang his way out of Angola, the performers would select songs they would sing if they had a chance to sing their own way out of Angola, or the gates of Hell or into the gates of Heaven.

Leadbelly was always a hero to me and to all blues musicians, especially Shreveport musicians. I have walked the streets where he walked, drank, fought and whored. I've played in dingy buildings where he played. I've made pilgrimages to his grave. Amidst some jeers, I have played "Goodnight Irene" and "Pig Meat Papa" to crowds who would much prefer some Billy Joel. And for the record, I still don't do any Billy Joel.

Three minutes into our conversation, I told Ronnie I was in. I told him to tell Roddie, Eric and Michael Juan I was in. I was shooting from the hip, but this soft-spoken stranger was talking my language.

Lafayette Parish Correctional Center would be tagged on the front end, as a warm-up. As the dates approached, we all met at KRVS for a run-through. I suppose it was more for the technical crew, as we musicians could only throw out some songs and continue to ponder how we might sing our way out of Hell.

We knocked out the Lafayette jail gig well enough, out in a concrete yard with tall, barbed-wire-topped walls, under chilly, gray skies. Rue Vermilion was just over one of those walls, but seemed far, far away. Those poor prisoners were a little hard to reach. They had been marched into the yard single-file and could hardly crack a smile - until Michael Juan hit them with his "I don't bite but my bulldog might." Things got better after that. I guess we all did fine, but Michael Juan would have been the first to "sing his way out."

Arriving at the Angola gates the next day, the guards seemed to be expecting me and to know what I was talking about. One of them said, "Oh yeah, Camp D. No problem. We'll need to hold on to your cell phone. Just give us a few minutes to shake down your van and then we'll have you on your way." With no escort whatsoever, I cruised a couple of miles through the most pristine, perfectly manicured farmland I had ever seen. I parked myself and was greeted by very nice guards at the fortified entrance to the camp. They passed me on through and into a visitors' center/commissary, where I met up with my comrades and enjoyed some good fried catfish. Inmates were visiting with their families. Kids bounced on knees. Cokes and catfish were on the house.

We met the assistant warden, Cathy Fontenot, who escorted us to the chapel where we would perform. Kris and the crew were busily moving about the stage, wiring things up, taping things down. We met the pastor of the chapel, who lived there. The inmates were coming and going as they pleased. Strangely, it didn't feel nearly as oppressive as the LPCC. Once these inmates were in their camp, they were settled in for a long, long stay. They would probably never see anyone outside of their own camp for their entire sentence, or for as long as they lived.

The show began. The cameras rolled. Ronnie told the inmates what was up and what we were doing. He had a remarkable rapport with the inmates. We musicians were on our game. I had figured out, with a little help from Michael Juan, that if I could sing my way out of hell, it would be by offering up some levity, not by trying to pull at heartstrings.

The inmates who attended the show were there by some degree of choice. They could have been walking around in the yard or playing checkers or reading a book. I could see that they respected Assistant Warden Fontenot very deeply, and that she had earned that respect by dignified means. They were free to cut loose a little bit, to walk around and get their groove on. They were incredibly polite.

They were super-responsive, appreciative and quite respectful, the kind of audience one would hope for. I never felt the least bit in danger. Yet, many of these men were serving life sentences, for God knows what.

There was no doubt that we all sang our way out that day. The inmates even told us as much. It had been a celebration, and a deeply spiritual experience. We visited with the inmates for a good while after the show. Call me naïve, but I felt as though they were my brothers. Their goodness shone through. They seemed articulate and astute. An inmate reporter from the Angola newspaper interviewed us. He handled his reporter's notebook as if it had been proudly earned.

The other musicians stuck around for an extended tour, but having sung my way out, I was ready to be out. Exiting through the gates, the guards handed me a paper bag, stapled several times shut. The bag contained my cell phone and to my surprise, my road maps. That made sense.

Over two years have passed since the visit to Angola. This past Sunday night, the film Songs of Souls premiered at Cinema on the Bayou Film Festival at Vermilionville, to a full and enthusiastic house. The musicians were reunited for a few songs following the screening.

What a pleasure to take the stage with these artists and revive that spirit once again. We've hung out and have been involved in many projects together. Eric and Roddie continue to work extensively together in the Hub City Allstars. But the Angola experience will always bond the four of us in its own special way.

Ronnie Clifton, bless his heart, passed a recording of my song, "Sing It" to an inmate gospel quartet at Camp D. They are featured in the documentary, singing my song out in the yard, with nothing but a guitar, snare drum and killer harmonies, grinning ear to ear, nothing to gain but the joy of music and the freedom it brings. That's how they do it. They sing their way out of prison every damn day. To me, that's the Grand Prize. That's a piece of Heaven that they gave to me. How can I not call them brothers? If I had known that would happen, it wouldn't have taken all three of those minutes to talk me into going.