Old is New at Pete's 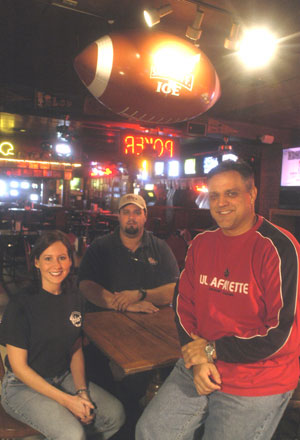 Mark Hutchinson relocated to Lafayette from Houston last year in search of a new venture. The Lafayette native ' a Lafayette High School and UL alum ' came home to raise his two kids in the city he loves and was looking to buy his own business after five years in orthopedic sales.

Hutchinson, who played baseball at UL in the late 1980s and managed Pete's on Johnston Street from 1990 to 1994 (where he also met his wife, Stacy), found a nice fit in his former employer. Pete's owners, ex-UL football coach Nelson Stokley and his wife, Kathy, were looking to get out of the sports bar biz they'd owned for a decade, so Hutchinson and his brother, Glen (who also worked at the bar at one time), took over the reins.

Stacy, who works from home as a senior external affairs rep for Shell Exploration & Production, is handling Pete's marketing and public relations, and Glen is in the process of redesigning Pete's Web site, www.petesonjohnston.com, where the famous Pete's T-shirts will be eventually be sold. "We're going to tie everything into our Web site ' lunch specials, hiring, Pete's apparel," says Mark.

Founded in 1968 by Preston Guidry and his brother, Pete, the sports bar features memorabilia chronicling decades of local sports greats. While the existing theme certainly fits, Mark says he's updating the art to showcase more current pro talents, like Brandon Stokley, Kevin Faulk, Javon Walker and Paul Bako. But he's not about to trample on the sacred territory of the $3 Big Pete's specials on Wednesdays and Saturdays, or the popular beer-battered onion rings, fried pickles and homemade chips. (Wraps developed by a nutritionist and five salad selections are among the more heart-healthy fare.)

Mark does, however, hope to expedite the biz's transition from a sports bar atmosphere to a more family-friendly one, so he's investing in modern lighting and a smoke filtering system. "What we're trying to push is the Pete's family sports grill," he says. "Pete's is probably one of the few places that has third generation regulars."

WEDDINGS ON A BUDGET

River Oaks Catering on Kaliste Saloom Road is expanding with a new location, Maison Des Bon Temps. The former Kettle on James Comeaux Road is being renovated for the new catering facility, according to River Oaks General Manager Joe Broussard.

A local group headed by Glen Richard is redeveloping the adjacent shopping center; the former K-Mart store across from Maison Des Bon Temps will be renovated for a new Residence Inn.

Broussard says Maison Des Bon Temps should open in early March for smaller events and receptions, accommodating 100-150 guests for seated affairs and up to 200 for stand-up gatherings.

It will target the budget wedding market. "We feel like there is a [large] market that can't afford City Club or River Oaks," says Broussard. "There are just so many weddings in this area." The facility will be marketed turnkey, however, with little room for flexibility. "You do have some options, but it is set up to make things simple and therefore cheaper," he says.

When River Oaks opened five years ago on its 8.5-acre site at the corner of Hugh Wallis and Kaliste Saloom roads, the market was underserved by such facilities. The approximately 16,000 square foot complex, which features both 9,000 and 4,000-square-foot ballrooms, two smaller rooms and two kitchens, has enjoyed tremendous success, Broussard says.

The Mall of Acadiana confirms Build-A-Bear Workshop is locating in the center ("Turk File," Nov. 23) in mid-April. Marketing Director Angela Jacks says the store will set up near Center Court next to Limited Too, taking over both a vacant spot and that of the 5-7-9 Shop. For now, 5-7-9 is housed in the former Casual Corner location in the Dillard's wing.

St. Louis-based Build-A-Bear, a teddy-bear themed store with bear-making stations, lets customers choose their furry friend, stuff it and add personality with hundreds of outfits and accessories. Each selection is then followed by a heart ceremony, whereby customers choose a red satin heart, make a wish and place it inside the stuffed animal.

Another new tenant, Kay Jewelers will take over spots previously occupied by Friedman's Jewelers and Claire's (which has moved its inventory to sister stores Icing and Afterthoughts). It should be open by the end of March.

Additionally, Man Alive, which offers hip-hop/urban wear for young men and women in a high-energy atmosphere, is filling the former Chick-Fil-A location next to Abercrombie. As part of a consolidation of the food court, Chick-Fil-A moved across the hall.