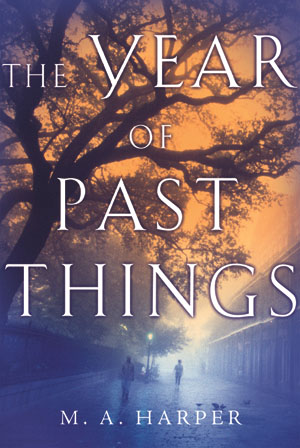 Second marriages come with a lot of baggage. Often, there are unresolved emotional issues that destroyed the first marriage, children on one or both sides of the equation, and that nagging question of whether or not success can follow failure. Add to those burdens the ghost of Cajun musician A.P. Savoie and you begin to see how the scales are tipped against protagonist Philip Randazzo in New Orleans writer M.A. Harper's thrilling yet contemplative new novel, The Year of Past Things.

Randazzo is a realist. A restaurateur who runs and owns Tasso, a trendy Louisiana eatery on Magazine Street, he realizes that the honeymoon won't last long when he marries Michelle Wickham, a widow and the mother of a 6-year-old girl and a teenage boy. He has three children of his own who live with his ex-wife in Mandeville, and what he considers reasonable expectations for his second try at matrimony: "It's not like I'm demanding Holy Matrimony here, no sacrament, he'd tell himself. Just some divine understanding that the Planet Earth blows and sometimes you just need somebody in your corner."

He isn't alone. Michelle Wickham's first marriage was born out of passion and youth. The only child of a Texas oilman and a pedigreed wife, Michelle was transplanted from the staid confines of a Houston suburb to the rural landscape of Bayou Lafourche at the age of 16. Michelle acclimated quickly, and, to the dismay of her parents, fell in love with her high school sweetheart, A.P. Savoie, a Cajun musician. Their fiery relationship managed to survive its share of disasters, and the couple was still in love and reasonably content when a drunk driver killed A.P.

Three years later and newly married to Philip, whom she has known less than a year, anthropology professor Michelle is driving her children to Bois Sec on All Saints Day to visit their father's grave. Her son, Cam, still grieving for his dad, feels some responsibility for his death. He doesn't want A.P. to be forgotten, and he accuses his mother of having never loved Savoie. Michelle's answer is telling; she replies, "Philip isn't the love of my life, and I kind of suspect that I'm not the love of his, either. But I was lonely and miserable, and so we kind of teamed up."

As Harper points out, simple commiseration and regular sex isn't enough of a foundation for a relationship. Although Philip and Michelle are barely six months into their marriage, they have already hit an impasse prompted by their separate pasts. Michelle deeply mourns her first mate and can't fully embrace her new husband. Philip is jealous of a dead man, and this adolescent reaction is symptomatic of the causes of his first divorce. Even before Savoie's spirit manifests itself, readers won't be able to ignore the oncoming crash of past and present.

Harper, who received critical acclaim for her previous novel, The Worst Day of My Life So Far, which dealt with a mother/daughter relationship affected by the devastation of Alzheimer's, has a talent for tempering difficult subjects with humor and a compelling narrative. Her latest is no exception. The supernatural appearances in the novel don't detract from the story's plausibility since Harper judiciously employs them; the ghosts don't talk, but are images, possibly mental projections. Instead, the ghost of A.P. Savoie and other psychic phenomena propel the plot forward ' is this poltergeist trying to harm or help Philip? ' while allowing Harper to provide insightful commentary on the role of memory in our lives, reflections on mortality, and recovering from catastrophes.

As Anne Rice fans know, New Orleans is a great setting for a ghost story. Strange happenings seem possible in an old city where the streetcars still ramble, masked riders are commonplace, and haunted tours are a competitive business. And Harper takes advantage of her setting by providing details of the city, humorous and serious, that only a local would notice. But don't dismiss this book as only being a modern day horror novel. Sure, it packs plenty of supernatural elements and the plot keeps the pages turning, but it's the underlying story of people struggling to create a future without forgetting the past that makes this novel and its characters worthy of attention.