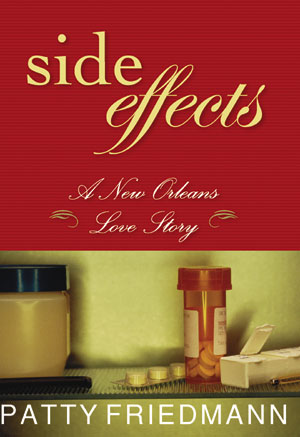 Patty Friedmann understands the real New Orleans, not the simple, overly romanticized version described in far too many travel guides. In her novels, she presents images of the city and its citizens that only an insider could know. And she does it all with a wit that makes readers laugh even when she's exposing a painful reality. Her latest novel, Side Effects: A New Orleans Love Story, describes life in the city before Katrina. However, the book's themes of prejudice, self-determination and looking beyond the superficial could be used as a prescription for New Orleans' future. With a skillful comedic hand and her ability to boil down her character's motivations to their purest, and sometimes most base forms, Friedmann's concocted a funny and potent literary elixir.

Ciana Jambon is a pharmacist at a New Orleans drugstore. Although technically the pharmacy manager and in charge, Ciana considers her employees to be co-workers and friends. Vendetta Greene is the pharmacy's technician. She handles most of the customers, greeting them with the New Orleans patois of the declarative sentence turned upside down into a question, "I could help you?"

Vendetta realizes she is a powerful person at the drugstore on the corner of South Claiborne and Carrollton, which sits on a racial dividing line ("separating nothing from nothing and everything from everything, black Pigeontown from white Tulane."). Customers depend on African-American Vendetta, and white Ciana, and they in turn know the customers' prescription secrets. All they expect is honesty, and perhaps a little recognition, as Friedmann points out. "In public both of them are scary women, and they know it, making people look them in the eye when they hand over antipsychotics and suppositories and swipe the bar code like they're handing over carrots in the grocery."

Outside of the pharmacy, the two best friends have little control over their lives. Vendetta shares a shotgun double with her two sisters and their children. She occupies one side of the double with her six-year-old daughter, Patricia, but Vendetta's siblings can barge into the other side at any time without notice. They don't understand Vendetta, her concern with privacy and her daughter's education. But she is "wise beyond her years" and though she is younger than Ciana, Vendetta regularly dispenses advice to her.

Ciana desperately needs it. She carries a few extra pounds and possesses a shaky ego that she props with stacks of pecan pancakes slathered in syrup. This kind of support lasts only as long as a sugar high, especially when the flapjacks are served by Ciana's mother, her only other confidant. Mom constantly compares Ciana to her brother, Geoffrey, and his wife, Corinne, a couple of Uptown posers, who would rather appear to be a happy couple than actually be a happy couple. In her mother's opinion, their marriage is ideal. And, as Friedmann ironically writes, "she has reminded Ciana as delicately as possible on numerous occasions, Ciana cannot be idealized. Even a black man is the way her mother opens every explanation of why no man adores Ciana enough to take care of her forever. Even a black man would only fall in love with a woman who's not fat."

What are the side effects of this kind of image-bashing, racist advice? Ciana believes her mother, and she can't see when someone does truly adore her.

Lennon Israel, an African-American pharmacy student who works alongside Ciana, is that someone. He is attracted to Ciana's size and the fragile girl inside. He wants Ciana to realize she is beautiful despite what others say. But he can't speak his feelings; he too is a victim of shortsighted familial opinions. Since he is neat and fastidious, his parents are convinced he must be gay.

Crisis forces these three well developed but inert characters into action. Ciana's mom dies under mysterious circumstances; Vendetta's daughter is so humiliated at her public school that she can't return; and Lennon recognizes Ciana is being wrongly accused for her mother's death. Friedmann pushes the novel forward with all three realizing how much they should depend on each other.

Good fiction imitates life, and what makes Friedmann's characters so believable are the personality traits they share with real people. These people exist in New Orleans and elsewhere ' fat, skinny, misunderstood, passionate, idiosyncratic, intelligent and good ' and writers like Friedmann let us know that we are these characters. On different levels, normal folk ' whatever "normal" is ' possess a number of these qualities. And for many, nothing short of a cataclysmic disaster could push us out of complacency.

Side Effects is a great reminder of what New Orleans used to be, the kind of book readers will put down at times to recall their own pre-Katrina memories. But what will make this book truly memorable is the message it brings: you will know those who truly love you and understand you by their actions and their words.