He may have cleaned up his language, but Bruce Willis is still blowing things up in the new franchise installment Live Free or Die Hard. 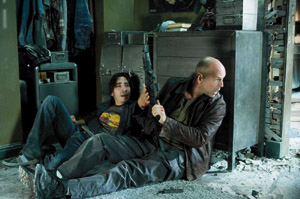 Die Hard fans have every right to be skeptical about the fourth film in the franchise. It's taken 12 years for the latest to hit screens, Bruce Willis no longer has his cool Moonlighting do, and director Len Wiseman's Underworld films kind of stunk. On top of all that, 20th Century Fox decided to tone down the trademark violence and bad language in order to secure a commercially safe PG-13, making this installment the first in the series to not garner an R.

Stop fretting, for Live Free Or Die Hard is a good, swift kick in this summer movie season's ass, even with the PG-13. The further adventures of one John McClane prove (after last year's totally fun Rocky Balboa) that our old movie heroes have plenty of life left in them.

When we first see McClane this time out, he's tired, he's grizzled, and he's grouchy. A pushy boy is trying to go too far with his daughter (Mary Elizabeth Winstead), and he's fully prepared to kick him some college student butt. Then he gets the call, the call McClane always seems to get, the call that will get him in a whole lot of trouble. He needs to transfer a computer hacker named Matt Farrell (Justin Long) to Washington, D.C. for classified reasons. Shortly upon meeting up with the guy for the trip, the bullets start flying.

The big problem: a former federal employee who tried to warn the government about cyber-terrorism has decided to show them what he was talking about. He creates a "fire sale" where everything controlled by computers is shut down, causing untold mayhem. The evil tech villain, played by a steely-eyed Timothy Olyphant, is also greedy, just like your typical Die Hard villain.

The action and stunts are top notch. In fact, some of the action set pieces are the best in a long while. Wiseman utilizes a lot of old-school special effects and stunts in lieu of CGI, so that means the explosions and falls you are seeing are the real deal. They are also often implausible and ridiculous, in keeping with the Die Hard tradition. McClane killing a helicopter with a car is a shining example of how to overdo your action movie with gusto.

Willis looks like he's having as good a time with the flick. He's still having those McClane dialogues with himself, bemoaning his tendency to be in the wrong place at the wrong time. The guy may have lost his hair, but he hasn't lost a step.

As for Long in the sidekick role, he's consistently funny and credible as a computer geek (Hey, he is the Apple guy, after all!). His trademark delivery of funny dialogue under his breath, as if he's scared to say it, never gets old, and he's the perfect complement for McClane. Kevin Smith makes a small but funny cameo as a fellow computer geek who hates authority figures.

As for the PG-13, I can tell you that it might have contributed to the film's biggest flaw. It looks at times like they filmed a harder version of this movie and then changed their minds about the R rating. The dialogue often doesn't match the film we are seeing, and also results in some messy editing. It's just a theory, but I'm thinking that's why I thought I heard McClane say "Jackass" but his mouth looked to be saying something different.

So, the Die Hard franchise now has the distinction of making it to four films, all of them good. Most series peter out by three, so this is a nice accomplishment. And after saying he would never make the fourth installment, Willis is already talking about part five. God bless his fickle soul.