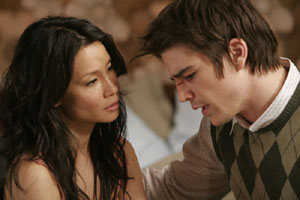 Director Paul McGuigan's latest effort is what could be called a postmodern film noir. Mistaken identity, guys with guns, murky motivations ' these are golden-oldie elements to fans of all those unforgettable films that stick to the shadows. But Lucky Number Slevin's off-kilter dialogue, its dazzling colors and patterns, and especially its quirky-although-not-unexpected ending slide this popcorn flick closer on the spectrum to film gris ' in all its many, marvelous shades.

McGuigan has never been one to shy away from complicated scripts. His debut The Acid House (1998) was penned by Irvine Welsh and was, in its own strange way, almost as much of a free-for-all as the author's more famous output, Trainspotting. McGuigan then moved on to the truly rich The Reckoning, a wonderfully nuanced medieval morality play starring Paul Bettany and Willem Dafoe. He followed with Wicker Park, his first collaboration with Slevin star Josh Hartnett and a remake of the highly psychological French film L'Appartement; Park seemed to lose a little something in translation but not so much as to make it a total wreck. And most recently, his directorial handiwork marked the pilot episode of the critically acclaimed (and therefore probably doomed) primetime drama Thief, starring Andre Braugher. So, yes, Mr. McGuigan likes big-watt names and even bigger-watt ideas. He finds both in Lucky Number Slevin.

Slevin's early scenes are studies in surreality. There's a touch of whimsy to everything McGuigan does, which includes orienting the audience inside a car looking out, only to have the window before us explode into bloody shards of glass as a gunned-down bookie comes crashing through. A phone rings in a kind of '70s deco hotel room, the wallpaper and bedspread a brown-palette vertigo riot. And Smith (Bruce Willis), sporting a porkpie and sitting in a wheelchair, meets up with a young traveler in a bus station whose blue chairs and ambient, dreamlike glow create the impression that this just might be the waiting room for heaven. If it is, then Smith is a wistful deity, recounting a tale from days gone by of a hardworking father and husband who once bet it all on a supposed sure thing of a horse race only to find himself on the wrong side of a bad, bad bunch. He draws in the young traveler ' and the larger audience ' with his terrible story (recounted through flashback scenes). But just exactly who is this Smith guy? And what he is doing?

Soon, we meet Slevin (Josh Hartnett), a happy-go-lucky hipster crashing at a friend's apartment. Trouble is, his absent host owes a lot of money to a lot of people, all of whom are assuming that Slevin is their guy. There's The Boss (Morgan Freeman), who's willing to overlook the debt for a teensy-weensy fratricidal favor; and there's The Rabbi (Ben Kingsley), who is equally interested in squaring the books in a less than kosher fashion. Slevin tries to navigate these shark-infested waters with a little help from Lindsey (Lucy Liu), his coroner neighbor with a theatrical taste for Columbo. Soon, the cops are on everyone's tails, led by Brikowski (Stanley Tucci). But Smith lurks just outside Slevin's line of vision as the plot thickens.

Hartnett (Pearl Harbor, Black Hawk Down) makes for a charming lead and more than holds his own against veteran scenery chewers like Freeman, Willis and Kingsley. McGuigan gives them all free rein, and they deliver. It's impossible to resist the glee with which they each dig in. Kingsley mutters and sputters, Willis demonstrates his trademark not-so-silent stoicism, and Freeman indulges himself in an all-too-rare appearance as a heavy.

Screenwriter Jason Smilovic (episodes of TV's Karen Sisco) has an ear for the kind of strange dialogue that would make Quentin Tarantino proud and a feel for the kind of originality that made a movie like The Usual Suspects stand out. Smilovic's script is smart, his sensibility sufficiently silly. The Boss soliloquizes about a relatively obscure cartoon character named the Shmoo. Certain snippets of the mistaken identity shtick play like "Who's on First." And Slevin and Lindsey cement their budding relationship when they find themselves in agreement about the identity of the only true James Bond.

At times, it all starts to seem a little too breezy for its own good ' until you realize that Smilovic and McGuigan are lulling their audience, deftly setting us up for the thriller's next shock to the system, however slight. Thinking moviegoers should be able to spot the surprise ending of this one a mile away, but even in its roughest spots (all of which come toward the all-is-revealed ending), the story works. Like a charm.