The latest Shrek film finds the charm and intelligence of its original incarnation Far, Far Away. 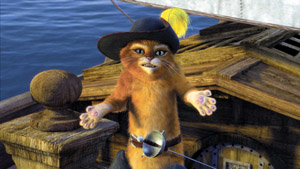 The underlying ethic of Shrek the Third is the oft-repeated idea that just because someone treats you as something ' a villain, an ogre, a loser ' doesn't mean that it's true or that you have to start believing it yourself and acting accordingly. Point well taken.

In fact, just because the world showed up this past weekend and treated Shrek's third visit as though it were the cinematic Second Coming doesn't mean the movie is actually worth a darn. It really sort of isn't. The jokes are mostly stale, and the heart is all but gone, making this one fractured fairy tale cycle that has a decidedly unhappy ending. Assuming, of course ' and honestly hoping more than just a little bit ' that no further ogre adventures come fourth.

Shrek (Mike Myers) and Fiona (Cameron Diaz) have settled into castle life in Far, Far Away. Donkey (Eddie Murphy) and his dragon brood are everywhere at once, and Puss in Boots (Antonio Banderas) is never very far behind. Fiona's father, King Harold (John Cleese), is ailing, so Shrek and Fiona have been filling in, covering the kingly duties. It hasn't been going well. Shrek's heavy-handedness means prospective knights become shish kebabs rather than sirs, ships are sunk rather than christened, and banquets end in uncontrollable, unavoidable chaos. Somehow fire always seems to follow.

Still, as always, Shrek seems to be doing his amiable best, putting up with powdered wigs and pomp and circumstance. When Harold dies, however, Shrek can't face the prospect of assuming the crown more permanently and so sets off to find Arthur (Justin Timberlake), distant cousin of Fiona and prepubescent pretender to the throne. The Round Table isn't even a glimmer in this kid's eye; he's just trying to survive Worcestershire High School. Lancelot (The Office's John Krasinski) is a jerky jock, Guinevere (Latifa Ouaou) is a Valley Girl snob, and Merlin (Eric Idle) isn't exactly a whiz of a wizard.

Back in Far, Far Away, a pregnant Fiona and a whole passel of princesses ' Cinderella (Amy Sedaris), Snow White (Amy Poehler), Sleeping Beauty (Cheri Oteri), Rapunzel (Maya Rudolph) ' try to fend off Prince Charming (Rupert Everett) as he makes a play for power, with everyone from Captain Hook (Ian McShane) to a grove of ambulatory evil trees (Andrew Birch, Christopher Knights) in tow.

There's an awful lot going on here, very little of it smart and even less of it amusing. The movie's mostly-AWOL intelligence, humor and originality are hard to accept, but what truly takes the Shrek out of Shrek the Third is the absence of heart. That sweet, silly breath of Shrek-y fresh air has disappeared. Maybe it's because the first Shrek film was a classic, in need of no increasingly watered-down sequels. Maybe it's because they are trying to cram too many new characters into one story to give any of them more than a few lines in which to establish themselves.

But maybe it's also that the first films actually respected the fairy tales they made such frivolous fun of. Shrek the Third feels less good-natured, more mean. The movie's kind of creepy Merlin is a mess, his powers mostly gone and his pants, too, for some reason. King Harold's wheezing death scene is played for laughs, his body deposited in a shoe box (from "Ye Olde Foot Locker" ' harty har har, guys; adding "ye olde" to the front of or "-eth" to the end of cultural anachronisms officially no longer qualifies as actual comedic effort). Harold's then set sail on a lily pad as a frog chorus croaks out "Live and Let Die." Although at times it seems as if it wants to be both, the moment is not funny, and it's not poignant; what it is is just wrong.

There are a few funny bits here and there. The team of screenwriters (whose roster nearly matches the length of the cast list) would have done better, though, to drop a few characters and focus on the ones we know and love already. On the plus side, The Gingerbread Man's life flashes before his eyes; Puss in Boots continues his Casanova ways; even preening Prince Charming has a moment, headlining a quite funny dinner-theater disaster early on. But the story can't hold on to those genuine moments and then slaps baby ogres on to the end, thinking cuteness will cancel out its multitudinous sins of unfunny commission.

Unlike its predecessors, this Shrek installment is no better than any other crummy kids' movie marketed to the maximum limit. And that's stinging criticism for a character that once set the standard for smart, quality, family-friendly fare. In the case of everyone's favorite green monster, turns out the third time's the charmless one.