Sean Penn and Emile Hirsch create a masterpiece with Into the Wild. 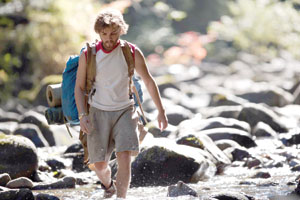 Sean Penn makes the leap from good director to master filmmaker with Into the Wild, a tremendously moving, beautifully acted film about a young man who wants to drop out in every way possible ' and gets his wish. Based on Jon Krakauer's acclaimed book, the true story of Christopher McCandless makes for a haunting, unforgettable film ' one of the year's best.

Anxious to shun society and get out from underneath the wings of his domineering parents, recent college graduate Christopher (Emile Hirsch) donates his savings to charity, packs his Datsun with gear and drives west. His plan: Take a cross-country trek, then head north to Alaska and live off the land. He works a series of odd jobs and makes numerous friends around the country before hiking into the Alaskan bush with little more than a bag of rice and a bunch of books. He finds an abandoned bus with a stove and sets up what he thinks will be a temporary camp.

Christopher's adventures aren't depicted chronologically. We see him camping in Alaska, hunting game and collecting seeds and roots for food. Then the film shows a series of flashbacks from Alaska to episodes during his trek across the United States and into Mexico. Penn does a nice job of contrasting Christopher's life in the wilderness with his tramp status in society. Out in the wild, Christopher is elated, whether he's paddling a kayak into Mexico or getting swept away by flash floods in his Datsun. Upon his return to big cities, he's miserably dwarfed by buildings and relegated to odd jobs and shelters.

Most moving of Christopher's stops along the way is his visit with an elderly man named Ron Franz, portrayed by the great Hal Holbrook. Ron lives alone near the Salton Sea (near Palm Springs, Calif.) and admires much in Christopher's tenacity and sense of adventure. Holbrook takes his portion of the picture and just runs with it, delivering one of the finest performances of his long career.

William Hurt and Marcia Gay Harden are effective as Christopher's confused and slightly miffed parents, who try to buy their son a car as a graduation present and are rejected. Vince Vaughn brings a comedic glint to the role of Wayne Westerberg, a wheat farmer who makes illegal cable boxes on the side. The always-great Catherine Keener shines as Jan, a hippie who seems to look upon Christopher as a son after giving him a ride in her RV.

When mentioning supporting work, one cannot ignore the contribution of Pearl Jam's Eddie Vedder and his music. His soundtrack is like a character in the film, at once mournful and joyous. This is a rare soundtrack, one that accentuates and amplifies the film with every note. Penn scored a real coup when he got Vedder.

The movie isn't just a triumph for Penn, but for Hirsch. He has starred in a string of mediocre movies, and his roles have been rather showy of late. Working with Penn, Hirsch strips down and reveals that he is an actor with incredible charms and talent.

Penn, meanwhile, does Krakauer's fine work a great honor. He's made some changes for time and to make passages less confusing, but the spirit of the original source is intact. It's also clear that Penn views the McCandless story not as a total tragedy, but a victory of sorts for the young man at its center, and the final moments of the movie contain a surprising level of happiness. Penn has made his first masterpiece as a director, a film that will stay with you long after viewing it.