A freshman congressman out to change the world gets swept away by Someone Else's master building plan in the family-friendly modern-day Noah tale Evan Almighty. 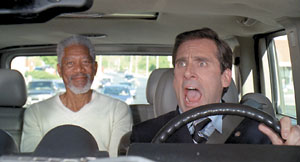 Convenient sequel-naming conventions aside, there is nothing almighty about Evan. Quite the opposite actually. Unlike He did with Bruce in director Tom Shadyac's first Almighty film, God doesn't impart any of His supernatural powers to Evan. He doesn't give the newscaster-turned-congressman any special abilities at all; instead, He just gives him a job to do. One big boat of a job. And because it's such a big, non-sequitur of a nautical request, He also has to give Evan a push. Or two or 12.

Evan Baxter, film fans will recall, was the newscaster who landed the anchor position that Jim Carrey's Bruce Nolan coveted in the careful-what-you-wish-for film Bruce Almighty. When God handed over his powers and responsibilities to a complaining Bruce, the power-drunk reporter exercised his newfound omnipotence, semantically smiting Evan on air so that he spouted babble instead of banter. Evan Almighty begins on that selfsame set, as Evan's colleagues congratulate him on his election to Congress and bid him a fond farewell. Perhaps Evan has internalized the message Bruce ultimately embraced ("be the miracle"); his farewell film-clip montage shows him exhorting cheering crowds to help him change the world. (We get no glimpses of or references to Bruce in this second film, so it's all conjecture, of course, but it seems highly possible.)

Evan (Steve Carell) may have a new world view, but he's certainly no saint. That work will come later. For now, he's a cocky freshman congressman in love with his newly lavish lifestyle. He buys a gas-guzzling Hummer to park in the driveway of a palatial house in suburban Virginia, a house he gleefully outfits with cabinets made of rare, endangered and expensive wood. His wife Joan (Lauren Graham) clues us in early on that maybe the family isn't the closest. Their three boys seem to be constantly disappointed by their workaholic dad, and Joan seems to possess a religious faith that Evan shrugs off. None of the choices he makes are consciously hurtful, just sort of selfish and careless and consumerist. But something Joan says about prayer sticks with him, and the night before his first day in Congress, he kneels beside his bed and asks God ' in his halting, sweet and hilarious way ' to help him actually do what he promised to do: change the world. He has no idea what he's getting himself into.

Soon, he's receiving deliveries of strange and ancient tool kits and stacks of wood at home, while receiving the hard-court press at work from Congressman Long (John Goodman), who wants his support on a bill that would open up certain parts of national parks to private development. (A subtle, but strong protect-the-environment message permeates the film.) Long thinks he's a legislative god, browbeating and charming fellow politicians into voting his way. He thinks he's got Evan all sewn up, but he doesn't know there's another deity in the picture. All those confusing deliveries are finally followed up by a visit from the Man Himself (Morgan Freeman), who reveals to highly unamused Evan that He wants him to build an ark. God even helpfully supplies a guide book: Ark Building for Dummies.

Evan naturally resists, and God starts his own campaign. Animals start showing up in twos; Evan's beard and hair begin to grow wild; he wakes up one morning to discover that robes are the only clothing he's able to wear. The bewildered congressman finally gives in and starts building the ark. His boys help him out, his wife wonders what kind of mid-life crisis this is, and his colleagues temporarily kick him out of Congress.

Carell is charming as the in-over-his-head congressman, his Evan a combination of his sweetly exasperated 40-Year-Old Virgin and the clueless Michael Scott he plays on NBC's The Office. Much has been made of the expensive CGI price tag this film racked up, making it the most expensive comedy in history, and the visuals are quite impressive. But all that money aside, the movie's greatest special effect is Morgan Freeman, whose God is really quite good; he is funny and wise and mysterious and seems a little bit mad. But there is method in all of that, and in this family-friendly film's message. (God, of course, gets all the good jokes and screenwriter Steve Oedekerk's most clever wordplay.)

Anyone looking for a straight-up telling of Noah and the ark will find themselves cast adrift. Go instead, anticipating a movie that combines a little heart with a lot of bird-poop jokes. Nothing in Evan Almighty really rocks the boat, but there's enough here for a sweet sail into the sunset.