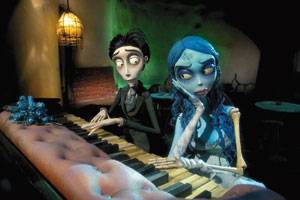 Leave it to Tim Burton to marry 21st century stop-animation technology with a story born of 19th century Jewish lore. Burton's The Corpse Bride spans the generation gap beautifully, boasting dazzling visuals and a quite charming sense of humor. And like all the best fairy tales, the daring director's newest effort is mysterious and spooky and, you guessed it, all together ooky.

Young Victor Van Dort (Johnny Depp), the son of a nouveau riche fishmonger and his wife, is scheduled to wed the daughter of old-money bluebloods, the Everglots. With the union, the Van Dorts hope to hook a slightly better social standing, and the snobby Everglots hope for quick cash infusion. (The cavernous halls of the Everglot mansion might be lined with portraits of rich ancestors, but the house's safe is filled with nothing more substantial than cobwebs.) Victor, a prototypical Burton protagonist, is a sweet but socially awkward introvert, and his parents' marital machinations make him very nervous indeed. Still, the story easily (and not-so-subtly) dispenses with any notion that these two families might be making a bad match: Victor, meet Victoria (Emily Watson). Our like-labeled lovers connect immediately, but Victor makes such a mush of his wedding vows at the rehearsal that Pastor Galswells (a delightfully dour Christopher Lee) runs him off into the forest in shame.

Wandering deeper and deeper into the woods, Victor stutters and stammers his way through the artfully written vows, playfully placing his intended's band of gold on a curiously finger-like stick and thus finding himself instantly married to the demure, decaying Corpse Bride (Helena Bonham Carter). This turn in Burton's tale springs from an old Russian folktale rooted in 19th century anti-Jewish practices; according to the story, Jewish brides would often be abducted and killed on their way to their weddings, then buried in the forest in their dresses. (The murders of these would-be mothers were supposedly aimed at lowering the number of Jewish children born in a given area.) Unsuspecting young husbands-to-be would place rings on what looked like roots, only to find themselves wed to the dead. Burton borrows the rough outline of the idea, his Corpse Bride a young woman killed in a graveyard while waiting to elope with her mysterious fiancé. For years, she has waited beneath the earth, and she'd rather lose an arm than let go of her newfound man ' literally. Her brittle bones mean that every time Victor tries to break away he inevitably brings a body part with him. It's more amusing than it sounds.

Any semblance to lore disappears right there, though, as Victor is transported to a jazzy, jubilant afterlife. Burton makes believe that all colors reside in the hopping hereafter, as opposed to the slate grays and icy blues of the world of the Van Dorts and the Everglots. A master of ceremonies named Bonejangles (voiced by composer Danny Elfman) holds court, and the French head waiter (literally only a head) tries to ply Victor with below-ground booze. Meanwhile "upstairs," as the various dead describe the world of the living, the Everglots are desperate to marry off their daughter, and so Victoria is promised to the smarmy schemer Lord Barkis Bittern (Richard E. Grant at his devilish best), who holds a murderous secret. How ever will our lost young lovers reunite?

With all those skeletons and dearly departed running around many scenes, screenwriters John August, Pamela Pettler and Caroline Thompson ' all Burton veterans ' piece together a sufficiently offbeat, if somewhat predictable, narrative. But even if anyone half-alive can see exactly where this one is going, the look of this film is such that we still want to see exactly how Burton (and codirector Mike Johnson) will get there. From the Corpse Bride's blue-hued skin and enormous eyes (which, incidentally, keep falling out of her head) to the impossibly long-limbed Galswells, the crooked-backed Everglot maid and the towering trees at night in the forest, Burton's visual eccentricities explode from the screen. Animation doesn't dull his skewed sensibilities one bit: Victor's akimbo arms recall the unusual grace of Edward Scissorhands; his midnight run through the haunted woods is straight out of Sleepy Hollow; most strikingly, the wacky wisdom of Burton's "grown-up" movies like Ed Wood and Big Fish pervades the melancholy tale of an unfortunate young man and his two wives. Short it might be, but Bride is never small. If the story dwells on the true and timeless nature of love, Burton's exemplary execution once again proves that a little genius, slightly mad, can last just as long.