The only thing that Steven Spielberg's movie about the end of the world needs is a better ending. 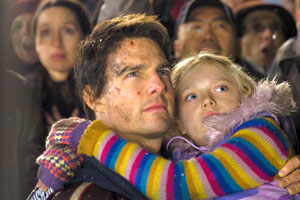 War of the Worlds is almost good enough to make you forget that Tom Cruise has gone insane. About five minutes into Steven Spielberg's taut, apocalyptic thriller, the affably arrogant, always-so-darn-watchable movie star resurfaces, and it's difficult not to like him ' memories of undignified declarations of love and recent Ritalin rants notwithstanding. Maybe Spielberg really is Hollywood's resident miracle worker because, surprisingly, Cruise isn't the only thing about War that makes sense.

The much-lauded director has done both Wells and Welles proud. The visionary author of the 1898 sci-fi novel that started the end of the world, H.G. Wells would no doubt have a hard-but-happy time believing the film's dazzling special effects; he would have no problem at all, however, recognizing his intergalactic invaders. Screenwriters Josh Friedman (Brian De Palma's upcoming Black Dahlia) and David Koepp (Jurassic Park, Spider-Man) dared to write a film whose first third is basically an extended, relentless action sequence. That's all the foundation necessary for Spielberg, who creates a surprising sense of the suffocating panic of 1938, when genius prankster Orson Welles punk'd an entire nation. If, as we are now told, people weren't really leaping from high-rise windows at the thought of so hostile a takeover, Spielberg ' with a frantic camera, an unflinching eye and a jarring use of explosive sound ' makes us wonder why on earth not.

Ray Ferrier (Cruise) is a New Jersey dock worker. He drives one car too fast and has the parts of another strewn around his tiny house in a small working-class neighborhood; his refrigerator boasts a nearly empty container of milk, an array of condiments and not much else. Ray also has two children that he hardly ever sees ' Rachel (Dakota Fanning) and Robbie (Justin Chatwin) ' and an exasperated, affluent ex-wife named Mary Ann (Miranda Otto). Not long after Mary Ann and her new husband drop the kids off for a rare weekend at Ray's, a freak lightning storm hits, so freak that it disables cars and clocks, knocks out electricity, leaves craters in city streets ' and heralds the arrival of an overwhelming army of space invaders. As a menacing Tripod machine towers over the now torn-apart cityscape and begins to vaporize the unfortunate souls in its path, all hell-on-earth breaks loose. Ray and his new responsibilities must run. They head ' where else? ' to Mom, who's spending the weekend in Boston. Only the most unstoppable military force in the history of any world stands in their way.

Counterintuitively, Ray is not meant to be the hero of this film. He does his best to hold his family together, thinking up some pretty nifty survival moves along the way. But in a stroke of scripting genius that hammers home the chaos at the heart of the film, he's really just an everyman: no information, no plan, no end in sight. This being a Spielberg movie, Ray is, of course, also required to learn a little about fatherhood along the way. For the most part, it works. Cruise and the uncanny, unmatched Fanning ' fundamentally playing the same scared child ' have an interesting chemistry, infinitely more believable than any single moment of Eyes Wide Shut or any close-mouthed red-carpet kisses.

It's frustratingly hard to talk War specifics without giving away major plot points or spoiling surprises. (Consider the broad, vague trailers for this film.) Suffice to say that Spielberg is still Spielberg, astounding in his visual acuity; his effects are fantastical, but never look fake. In the midst of a film that moves seamlessly from the gray and blue of pre-invasion New Jersey to the creepy Technicolor crimson countryside of war, he achieves a deep level of despair not seen in even his supposedly more mature films.

So what's wrong with War? Same thing: Spielberg is still Spielberg. For better and worse, every movie he has ever made is in here ' the surreal odyssey of Empire of the Sun, the ash and atrocity of Schindler's List, the bleak technology of Minority Report, the lecturing bookend construct and idealization of war of Saving Private Ryan, even the tweeness of E.T. In War, Spielberg creates an inventive, adrenaline-fueled space thriller, somewhere between the claustrophobia of Alien and the gnawing unease of a particularly tasty Twilight Zone episode. But at the same time, he's still the same intellectually and emotionally immature filmmaker he's always been. In one nasty nail-biter of a moment midway through War, he boldly goes for the obvious and has the nerve to present it as though his outcome were inconceivable. Worse yet, as good as War is most of the way through, Spielberg ultimately sells out his horror movie with an untenable, infuriating E.T. ending ' just another example of one of his unimaginable brave new worlds wrapped in fuzzy-wuzzy marshmallow feelings and self-important moralizations.

Still, the paranoia and frenzy of War sit on your shoulder as you make your way home, and that's the mark of a (nearly) great filmmaker. Maybe he's learning.