In the Coast Guard movie The Guardian, unlikely pair Kevin Costner and Ashton Kutcher get along just swimmingly. 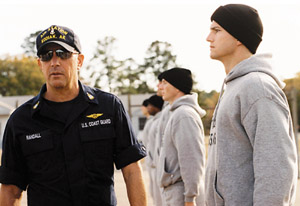 In the good-guy glow of The Guardian, it's hard not to see Ashton Kutcher as the old Tom Cruise. Not the new-and-unimproved Cruise, who frightens children and publicists the world over, but the old one, who simply could do no wrong. Think back to the young charmer with the high-wattage smile whose first marriage to a more established actress united fans around the globe in one spontaneous, simultaneous shoulder shrug. Sure, his overdeveloped ambition probably outshone his underdeveloped talent back then, but he was a star for an almost better reason. We just wanted him to be. Unless Kutcher hops over a few sofas and (God forbid) spoils the seduction, he now wields that same mad magnetism.

The importance of an actor's likability cannot be too heavily weighed. Audiences make allowances for two kinds of performers: the insanely talented ones and the irresistibly charming ones. The even-borderline brilliant performers ' the Sean Penns, the Daniel Day-Lewises, the Russell Crowes, the ambassadors-to-humanity formerly known as Angelina Jolie ' are allowed to be bad boys, eccentrics and freaks, both on screen and off. More moderately talented actors and actresses can achieve the same level of audience leniency by masking their cinematic shortcomings with good looks, good luck and ' that most bankable beauty mark of all ' charisma. Charisma is the difference between an actor and a movie star. It's what makes the camera ' and the audience ' love you, even if the acting is a little forced, the characterization a little workmanlike. Cruise crafted a career out of charisma, becoming a better actor as he went along. Then it all came crashing down on Katie's pretty head, and the rest is mystery.

Kutcher could follow the same upward trajectory, with his humor staving off any eventual tabloid crucifixion. There is a remarkable scene in the middle of The Guardian, notable not for its dialogue or relevance to the story. Kutcher, as Coast Guard rescue-swimmer wannabe Jake Fischer, sits at a long table filled with his fellow students; it's a rare night out for the group, who engage in a little booze and a lot of banter. Seated at the head of the table, Kutcher is king. What makes the scene work is not the bravado of the back-and-forth with his friends and certainly not the Top Gun-ish pick-up scenario that unfolds; what makes the scene work is that Kutcher is so obviously comfortable and so obviously having a good time. You get the feeling that this is really how he is when he and Demi are hanging out with Bruce and the kids, or whatever it is they do. His laugh is simple, unforced and infectious. He's authentic ' and that's a case study in charisma.

His Guardian co-star Kevin Costner (The Upside of Anger) is no slouch in that department, either. His dialogue might occasionally come out a bit stiff, but the camera just can't get enough of his face. As living legend Ben Randall, a Bering Sea-based Coast Guard rescue swimmer with a rumored 300 saves, Costner does the same self-deprecating tough guy he's done so well since Bull Durham. Ben's in conflict from almost the film's first moments, with himself, with the sea, with his wife, his past and eventually with Jake. As a reluctant teacher at the Coast Guard's storied "A School," his teaching methods are unorthodox and format-busting. The Guardian's core plot ' the brash young rookie schooled by the wise elder soldier ' has been written a million times over but rarely executed with this kind of simpatico between the players; Kutcher and Costner are an inspired pairing. The only thing better than when these two driven men aren't getting along is the one extended scene when they finally start to. The two have spent the better part of the movie circling each other, trying to make sense of what they see. Jake's an ambitious guy with, it turns out, a dark secret, a secret that mirrors some of Ben's own experiences. What follows makes for a strange, intriguing buddy movie.

Made with the cooperation of the Coast Guard, The Guardian sometimes plays like an inspirational commercial. But why begrudge the most overlooked of services its moment in the sun? Screenwriter Ron L. Brinkerhoff has seen the military canon (Top Gun, An Officer and a Gentleman, G.I. Jane, etc.) and borrows selectively; the result is about three movies rolled into one, with as many endings. But Brinkerhoff keeps the suspense factor high throughout and the character development constant until the end. Director Andrew Davis (The Fugitive) and cinematographer Stephen St. John (Holes) film amazingly claustrophobic action sequences; they roil the ocean to immense effect, on par with the magisterial realism of Peter Weir's Master and Commander.

Anyone who can't see exactly where The Guardian is going should probably have his movie IQ checked and fast. Anyone who isn't hooked anyway is just all wet.